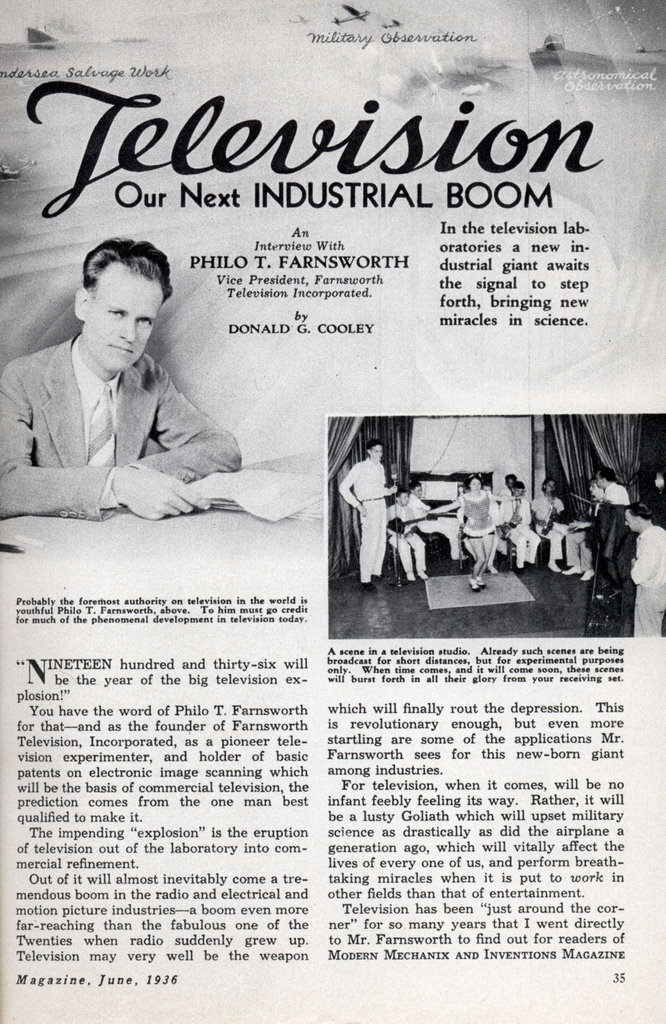 The impending “explosion” is the eruption of television out of the laboratory into commercial refinement.

Out of it will almost inevitably come a tremendous boom in the radio and electrical and motion picture industriesâ€”a boom even more far-reaching than the fabulous one of the Twenties when radio suddenly grew up. Television may very well be the weapon which will finally rout the depression. This is revolutionary enough, but even more startling are some of the applications Mr. Farnsworth sees for this new-born giant among industries.

For television, when it comes, will be no infant feebly feeling its way. Rather, it will be a lusty Goliath which will upset military science as drastically as did the airplane a generation ago, which will vitally affect the lives of every one of us, and perform breathtaking miracles when it is put to work in other fields than that of entertainment.

Television has been “just around the corner” for so many years that I went directly to Mr. Farnsworth to find out for readers of Modern Mechanix and Inventions Magazine just when the public may expect to share in its wonders. At the Farnsworth laboratories in Philadelphia I discovered that television is a full-grown giant imprisoned within the walls of a few experimental workshops, ready for the spark that will release it.

That release, Mr. Farnsworth believes, will come this year. This does not mean that you will have a television set in your home receiving programs from a nationwide network before the snow flies. Problems of standardization and transmission difficulties have built a stone wall between television and the vast public that awaits it. But the coming explosion will blast that wall to atoms.

“What is television going to do to the world when it comes?” I asked. “It’s more than an instrument of entertainment. Not long ago Andrew W. Cruse of the United States Department of Commerce told electrical engineers that television could become a mechanical military spy. Transmitters could be hidden behind the lines, or suspended from airplanes flying at invisible altitudes, and flash back a living picture of the enemy’s operations. As a scientist, does this application seem fantastic to you?”

“It’s not fantastic in the least,” Mr. Farnsworth denied promptly. “We expect to see a wide use of television in the military field. Of course it is impossible to get any War Office in the world to admit or explain its interest in televisionâ€”probably there isn’t another military secret so closely guarded.

“Let me give you an idea of what is happening. Last July all television experiments in Germany, previously controlled by the government-owned broadcasting company, were transferred to the German Air Ministry for “flight safety and national protection.” This can only mean that the Germans are developing television as a vitally important branch of military aviation.

“France replied to this threat by speeding up television research. A transmitter from the Eiffel Tower is now in operation. In England, the Baird Company, licensees under the Farnsworth system, are already manufacturing receivers to sell for $250. In Italy, Russia and Japan experiments are in progress. What one country is doing, you can be sure all other countries are doing!”

This intense military interest in television can only mean that the next great war will be fought along revolutionary lines. Television spies will be scattered behind the battlefronts and will flash detailed pictures of what is going on in disputed territory. Surprise attacks will become impossible; mass movements of troops will be detected immediately. Big guns will be immediately blown to bits, for the television eye dangling from an airplane will detect the telltale smoke of its shell fire, and the exact range will be easily computed by the enemy.

Even more romantic are some of the other uses of television suggested by Mr. Cruse, which such an expert as Mr. Farnsworth agrees are well within the range of probability.

Astronomers could view a heavenly body through binoculars a thousand miles wide. Two telescopes several hundred miles apart could be trained on the same star, the images scanned by television and transmitted to common eyepieces which would give a three-dimensional effect.

The Lusitania or long-lost treasure vessels of the Spanish Main could be discovered and viewed on the ocean floor by dropping a suitably illuminated television transmitter from a salvage ship.

“But what will television do to our everyday lives?” I asked. “A great many prophets believe it will put the movie theatres out of business by giving us sound pictures in our own homes.”

Theaters to Be Helped by Television

“On the contrary, it will help the theatres,” Mr. Farnsworth replied. “Radio was expected by many to put the phonograph makers out of business, but more phonographs are sold today than ever before. Hollywood will be kept jumping supplying pictures for leasing to television broadcasting stationsâ€”a vast new market for its output.

“The theatre will not suffer because it is a fundamental instinct for human beings to get out among other people when they seek entertainment. And by running trailers on home television sets, theatre owners have a powerful new form of visual advertising to lure more customers within their doors.”

Complex as it is in its development, the principle of electronic scanning is simple enough fundamentally. Inasmuch as it is the basis for the most striking of modern miracles, it is well worth a few minutes’ study.

An actor, a baseball player, the participants in a news event, or anything else it is desired to televise, projects an optical image upon a photo-electric film or cathode. This image, by the action of scanning, is broken down into thousands of tiny components like the dots which comprise a halftone newspaper cut. Each element or point of the image on the cathode emits electrons in numbers proportional to the light intensity at that point. These electrons move rapidly toward the anode in myriads of tiny streams or rays, each ray conveying, by its intensity, the brightness of some point of the scene. These rays can be directed or bent by magnetic fields. A steady field, called the focusing field, keeps all of these rays in an orderly bundle so that, where they impinge upon the anode, they would form an exact duplicate of the original light image if they could be seen.

The anode is pierced by one tiny hole (scanning aperture) whose width and height are 1/343 of that of the scene focused on the cathode. At every instant the rays or flying electrons from some tiny part of the scene pass through this aperture into an electron multiplier where they are amplified and produce a signal current which can be transmitted to the distant receivers. When the rays are bent, the electron image sweeps over the anode, producing the same effect as if the aperture had been moved over the image, that is, electrons from successively different points on the scene are picked up.

Thus, to scan the scene, the electron image is swept back and forth and up and down over the anode in such a way that the aperture scans 343 lines across the image every 1/30 second. This is accomplished by passing alternating currents of saw-tooth wave form through the coils at the sides of the dissector, whose magnetic fields pass through the tube and bend the rays. The current which deflects vertically alternates at 30 cycles per second while that producing the horizontal swing alternates at 343×30 or 10,290 cycles per second.

The fluctuating electron beam from the image dissector is then transmitted to an oscillight tube, which is the Farnsworth receiving device. The impulses arrive at the tube and are shot from an electron gun against a fluorescent screen, where the electron bombardment becomes visible to the eye as light. Since this light varies in intensity exactly as it did in the optical image scanned in the Image Dissector, we have a visible picture full of detail.

Image Is Green, or Black and White

As it appears on the receiving screen, the image is pale green or white, illuminated so brilliantly that a darkened room is not necessary to view it. If desired, the image can be reproduced in black and white by varying the nature of the fluorescent materials employed. Cost is the determining feature. Probably all will be white reproductions.

Most of us are familiar with the principle of motion picture projection, in which a series of still pictures is thrown on and off the screen so rapidly that the retina of the human eye fuses them into one continuous picture with the illusion of motion. This is exactly what happens in the television receiver, except that each separate picture, instead of being projected as a whole, is literally constructed of a hundred thousand points of light placed side by side, like a bricklayer building a wallâ€” and all in a thirtieth of a second!

The most recent Farnsworth development has been patented under the name of the Multipactor tube. This is a startling vacuum tube which multiplies current at such a speed that if it continued for as brief a period as a single second, it would pass more current than all the Niagaras and all the power plants in the entire world! Each one hundred millionth second it multiplies current five times.

Of course, in the Multipactor a state of balance is maintained and the runaway power kept under control. Its importance to television is that it is expected to make possible the use of cold cathode receiving and transmitting tubes.

Official confirmation of the imminence of television is found in the recent action of the Federal Communications Commission in authorizing the laying of a coaxial cable suitable for television transmission between New York and Philadelphia. Construction must start before July first.

It’s the first reverberation of a gigantic boomâ€”proof that Mr. Farnsworth’s prediction of an imminent television explosion is already coming true. The new cable may very well be the spark that will set off the big explosion!