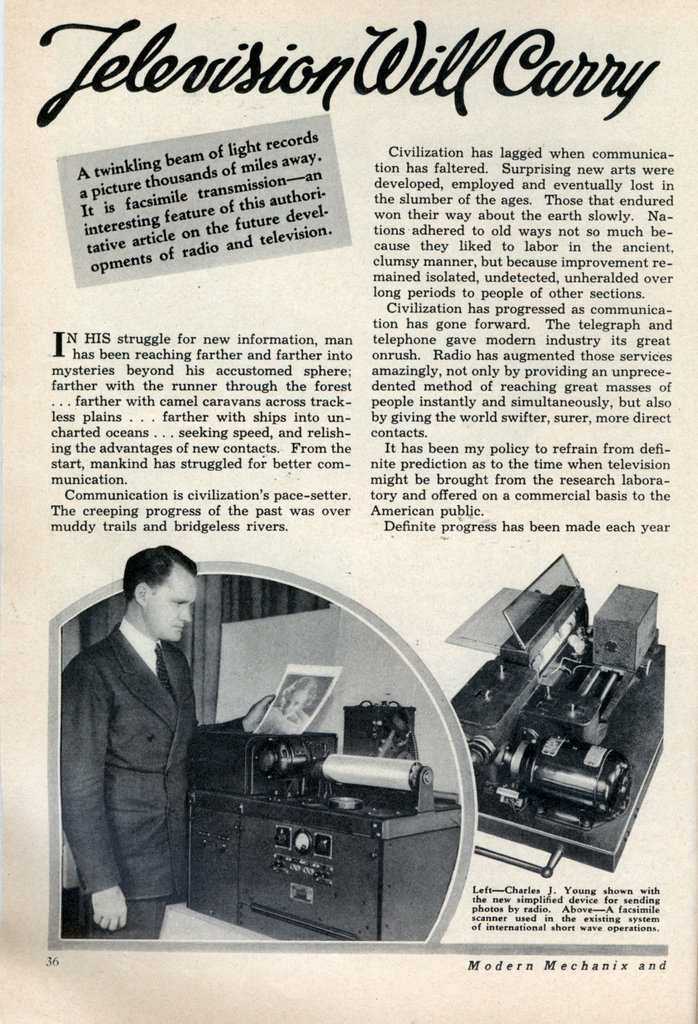 Television Will Carry the Mails

A twinkling beam of light records a picture thousands of miles away. It is facsimile transmission- an interesting feature of this authoritative article on the future developments of radio and television.

IN HIS struggle for new information, man has been reaching farther and farther into mysteries beyond his accustomed sphere; farther with the runner through the forest . . . farther with camel caravans across trackless plains . . . farther with ships into uncharted oceans . . . seeking speed, and relishing the advantages of new contacts. From the start, mankind has struggled for better communication.

Communication is civilization’s pace-setter. The creeping progress of the past was over muddy trails and bridgeless rivers.

Civilization has lagged when communication has faltered. Surprising new arts were developed, employed and eventually lost in the slumber of the ages. Those that endured won their way about the earth slowly. Nations adhered to old ways not so much because they liked to labor in the ancient, clumsy manner, but because improvement remained isolated, undetected, unheralded over long periods to people of other sections.

Civilization has progressed as communication has gone forward. The telegraph and telephone gave modern industry its great onrush. Radio has augmented those services amazingly, not only by providing an unprecedented method of reaching great masses of people instantly and simultaneously, but also by giving the world swifter, surer, more direct contacts.

It has been my policy to refrain from definite prediction as to the time when television might be brought from the research laboratory and offered on a commercial basis to the American public.

Definite progress has been made each year in research and development leading to sight transmission by radio. The latest development in television research is the perfection of the “iconoscope”â€”an electric eyeâ€”which has advanced the technique of television by facilitating the pickup of studio action and permitting the broadcast of remote scenes, thereby giving to the television transmitter the function of a camera lens.

Through the use of the iconoscope, street scenes and performances in studios have been satisfactorily transmitted and received by television, on an experimental and laboratoryb asis.

Nevertheless, some important problems relating not only to the technical side, but also the commercial side of television still call for solution. These problems relate principally to the cost of erecting and operating the necessary television transmitting stations, their interconnection for wide-range service, the price at which television receiving sets can be successfully manufactured and sold to the public, and the production of suitable programs.

While it is impossible to anticipate the exact time when this development can be introduced on an industrial basis, it may nevertheless be said that the progress made by laboratories and engineers has brought us much nearer the goal when transmission of sight will be added to transmission of sound.

Particular importance, both with respect to new radio communication service and television, is attached to the research and engineering carried on in the field of ultra short radio waves.

The creation of extremely small radio tubes has produced a new avenue of approach to the problem of using ultra short waves. Tubes have been developed with a diameter of only five-eighths of an inch having the internal elements fitted into a space about the size of a pea. They are especially effective on wavelengths in the region of one meter or below.

My faith in the future of radio science is geared to facsimile and television. And facsimile, the transmission of still pictures, is the gateway to television. These developments will produce not only new means of entertainment, but also new methods of communication.

Since Morse invented the telegraph there has been no radical improvement in telegraphy. Morse, a poet as well as an inventor, created the Morse code of dots and dashes which is still in international use.

No longer must the message be broken down into hundreds of dots and dashes. It is reproduced by light “brushes” that “paint” it line for line. The next step is to flash the complete picture.

The first logical step, of course, is to transmit still pictures and print. That is facsimile radio. The next step will be to send moving pictures. That is television. When the latter is accomplished, it will be possible to see a face or an object through space and to reproduce a newspaper page instantaneously.

The problem of facsimile transmission has not been merely one of circuits and terminal apparatus. Typewriters and recorders have been available, but we needed a successful track to link the transmitter and recorder.

This we have in the short waves used to transmit across the sea and continent. Now we have the micro-waves for inter-city communication.

I am certain that progress will be rapid. Within the next year we expect to have in operation the micro-wave domestic facsimile circuit between New York and Philadelphia for which an experimental license has been granted. The short wave oversea channel has already proved its value in flashing news pictures between Europe and America.

The day will come when radio will dip into the mailbag. If a letter is worth the time required for dictation, for the stenographer to write, for re-reading by the sender and the cost of the stamp, then it is worth fifty cents or a dollar to flash it across the world for quick delivery and immediate answer.

I believe thousands of letters and messages ultimately will fly from city to city, from country to country by facsimile radio.

The demand for pictures in all parts of the world of the recent Morro Castle catastrophe taxed the capacity of our oversea facsimile system. A greater number of photos were projected through the air that week-end than ever before in the history of photoradio.

Our international facsimile service now being utilized on the normal short-wave channels, between 15 and 100 meters, is making use of new instruments to improve considerably the texture of the photograph.

In this facsimile system perfected by our engineers, a pin-point beam of light is made to play through lenses on a photograph wrapped around a slowly revolving cylinder.

The light beam strikes the paper like a tiny star, each twinkle of which assists in “painting” the picture being flashed to some distant city. A photo-electric cell close to the light beam is instantly affected by the gradations of light from pure white through grays to inky black reflected from the revolving picture.

As the star moves across the face of the picture being transmitted, the variations of light intensity picked up by the photo-electric cell are greatly strengthened by an amplifier and made to modulate the transmitting aerial. That puts the picture on the air.

The process is reversed at the receiving end. A small pin-point beam of light plays across slowly revolving drum upon which is wrapped either a piece of photographic bromide paper or a photographic film.

As rapidly as the picture is completed it is passed through a hole in the wall of the operating room into a dark-room for development by standard photographic methods. It is then ready for delivery by messenger.