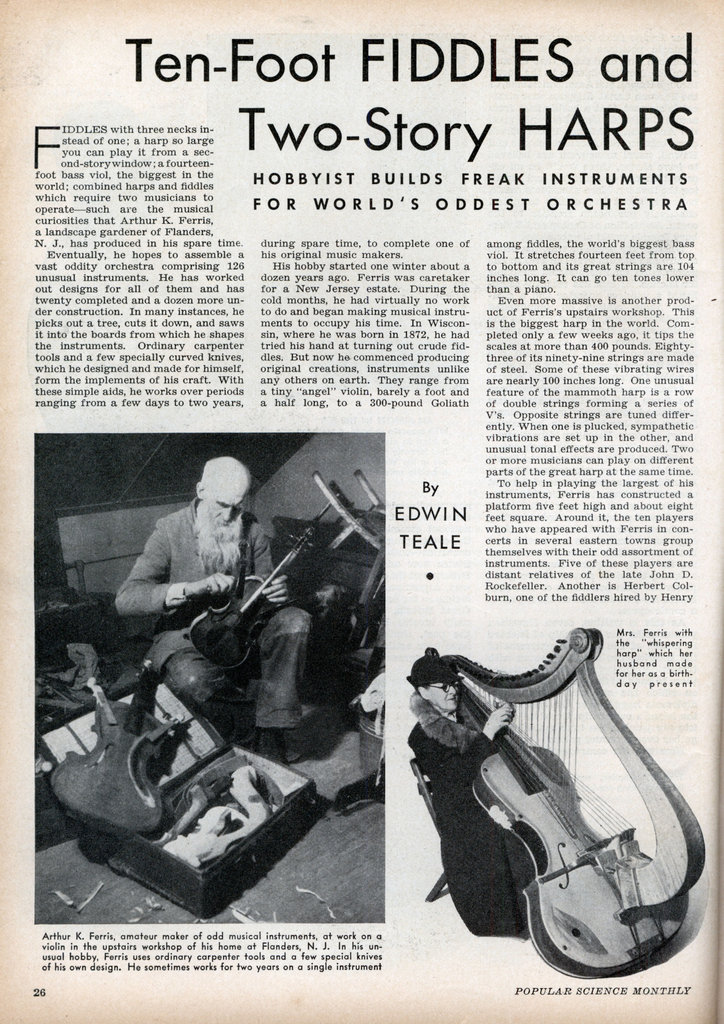 FIDDLES with three necks instead of one; a harp so large you can play it from a second-story window ; a fourteen-foot bass viol, the biggest in the world; combined harps and fiddles which require two musicians to operateâ€”such are the musical curiosities that Arthur K. Ferris, a landscape gardener of Flanders, N. J., has produced in his spare time. Eventually, he hopes to assemble a vast oddity orchestra comprising 126 unusual instruments. He has worked out designs for all of them and has twenty completed and a dozen more under construction. In many instances, he picks out a tree, cuts it down, and saws it into the boards from which he shapes the instruments. Ordinary carpenter tools and a few specially curved knives, which he designed and made for himself, form the implements of his craft. With these simple aids, he works over periods ranging from a few days to two years, during spare time, to complete one of his original music makers.

His hobby started one winter about a dozen years ago. Ferris was caretaker for a New Jersey estate. During the cold months, he had virtually no work to do and began making musical instruments to occupy his time. In Wisconsin, where he was born in 1872, he had tried his hand at turning out crude fiddles. But now he commenced producing original creations, instruments unlike any others on earth. They range from a tiny “angel” violin, barely a foot and a half long, to a 300-pound Goliath among fiddles, the world’s biggest bass viol. It stretches fourteen feet from top to bottom and its great strings are 104 inches long. It can go ten tones lower than a piano.

Even more massive is another product of Ferris’s upstairs workshop. This is the biggest harp in the world. Completed only a few weeks ago, it tips the scales at more than 400 pounds. Eighty-three of its ninety-nine strings are made of steel. Some of these vibrating wires are nearly 100 inches long. One unusual feature of the mammoth harp is a row of double strings forming a series of V’s. Opposite strings are tuned differently. When one is plucked, sympathetic vibrations are set up in the other, and unusual tonal effects are produced. Two or more musicians can play on different parts of the great harp at the same time.

To help in playing the largest of his instruments, Ferris has constructed a platform five feet high and about eight feet square. Around it, the ten players who have appeared with Ferris in concerts in several eastern towns group themselves with their odd assortment of instruments. Five of these players are distant relatives of the late John D. Rockefeller. Another is Herbert Colburn, one of the fiddlers hired by Henry Ford some years ago, when the Detroit manufacturer tried to revive old-time country dances.

Among the unconventional instruments these musicians play is a curious “bridal lap harp,” a combination of harp and violin. It requires two players to operate it. While a girl plucks the harp, a man moves a bow across the violin strings. The result is a curious duet from a single instrument.

As a present for his wife on her sixtieth birthday, Ferris designed a huge “whispering harp.” The sound from the vibrating strings grows in volume as it enters a large violin-shaped body to which the harp is attached.

Another unusual version of a violin is an instrument with a curving arm rising above the neck to support vertical catgut strings that descend into the body of the fiddle. The instrument is played like a conventional violin. The vertical strings, according to the maker, give added volume to the music.

Before Ferris took up his unusual hobby, he could not tell one note of music from another. It was after he made his first instruments that he began learning how to play them. Even stranger is the fact that he possessed little natural ability as a carpenter. He had difficulty in driving a nail and sawing a straight line. Yet, the exquisite workmanship shown in some of his instruments is amazing. Two of the violins made by this self-taught craftsman have sold for $500 apiece, and similar sums have been offered for others.

In his work, Ferris employs a wide variety of different woods. He has used spruce, cedar, sassafras, tulip, willow, ailanthus, thuja, ebony, crab apple, black walnut, bird’s-eye maple, and even poison sumac! The last-named material was employed in the inlay on the back of a curious fiddle which had the shape of a wide mandolin.

Only by testing wood can Ferris determine whether it is suitable for his work. Once he cut down two spruce trees that grew close together and looked exactly alike. Even when he had the trunks sawed up into boards, he could not detect the slightest difference in them. Yet, when he thumped the wood of one tree, it gave off a clear, bell-like tone; when he thumped that of the other, it responded only with a dull, leaden sound. In some mysterious way, the tone is a characteristic of the wood.

ANOTHER outstanding instrument in his collection was made from a discarded cedar stump. Once he bought a large sassafras tree, an oak, and a beech, all for five dollars. Out of this raw material he fashioned several of his instruments. The most he ever paid for a single tree was twenty-five dollars. A willow which he bought for this sum possessed unusual tone quality.

As often as not, he shapes his novel additions to the orchestra from green, unseasoned wood. He says he can notice no difference in the tone of the instrument before and after the wood has completely dried out. Only rarely does he buy seasoned boards.

To build his giant fiddle, however, he had to get the wood for the body from a Newark, N. J., lumber yard. It came in the form of a left-over end from an immense plank of airplane spruce which had been shipped from Oregon. Sassafras was used for the neck of the fourteen-foot instrument. The total cost of the biggest harp and the biggest fiddle together ran to only a little more than fifty dollars.

A few weeks ago, the booming tones of the big bass viol were heard from coast to coast when the Ferris musicians performed on a nation-wide radio program. Inquiries relative to concerts by his unique orchestra have reached Ferris from as far away as Ohio. The owner of a cabaret recently offered him twenty-five dollars a day for a personal appearance with the world’s largest fiddle. Devoutly religious, he turns down most of the offers, as he will permit nothing but sacred music to be played on his instruments.

ONE of the oddest of all his odd creations is what he calls his “suitcase viol.” It is a large fiddle with a stout, rectangular body which can be opened up in the manner of a suitcase. Ferris can store the neck of the viol as well as three or four small violins inside of it. Snapped shut and inclosed in a canvas cover, the instrument body forms a case which can be carried as luggage. Before he started construction of this double-purpose instrument, he measured the space between the seats of railway coaches. The suitcase viol is just the right size to slip into this space so it can be taken on railway journeys made by the orchestra.