If it began to leak then the ball wasn’t exactly air-tight…
Also, with its tethers attached the capsule looks a lot like one of the tripods from War of the Worlds. 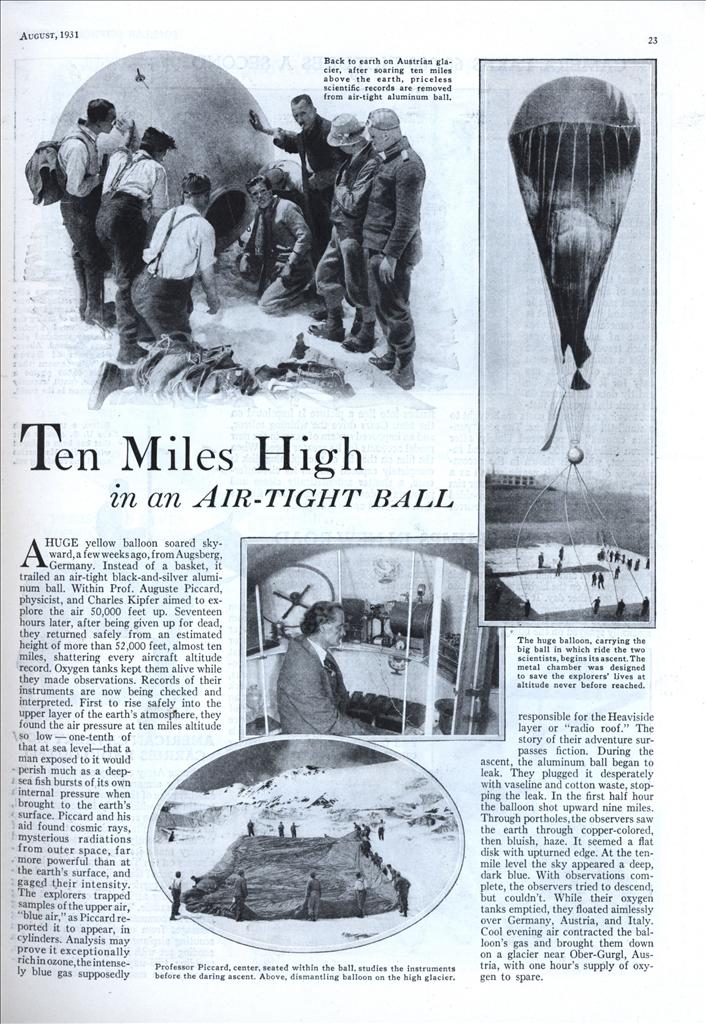 A HUGE yellow balloon soared skyward, a few weeks ago, from Augsberg, -Germany. Instead of a basket, it trailed an air-tight black-and-silver aluminum ball. Within Prof. Auguste Piccard, physicist, and Charles Kipfer aimed to explore the air 50,000 feet up. Seventeen hours later, after being given up for dead, they returned safely from an estimated height of more than 52,000 feet, almost ten miles, shattering every aircraft altitude record. Oxygen tanks kept them alive while they made observations. Records of their instruments are now being checked and interpreted. First to rise safely into the upper layer of the earth’s atmosphere, they found the air pressure at ten miles altitude so low — one-tenth of that at sea level—that a man exposed to it would perish much as a deep-sea fish bursts of its own internal pressure when brought to the earth’s surface. Piccard and his aid found cosmic rays, mysterious radiations from outer space, far more powerful than at the earth’s surface, and gaged their intensity. The explorers trapped samples of the upper air, “blue air,” as Piccard reported it to appear, in cylinders. Analysis may prove it exceptionally rich in ozone,the intensely blue gas supposedly responsible for the Heaviside layer or “radio roof.” The story of their adventure surpasses fiction. During the ascent, the aluminum ball began to leak. They plugged it desperately with vaseline and cotton waste, stopping the leak. In the first half hour the balloon shot upward nine miles. Through portholes,the observers saw the earth through copper-colored, then bluish, haze. It seemed a flat disk with upturned edge. At the ten-mile level the sky appeared a deep, dark blue. With observations complete, the observers tried to descend, but couldn’t. While their oxygen tanks emptied, they floated aimlessly over Germany, Austria, and Italy. Cool evening air contracted the balloon’s gas and brought them down on a glacier near Ober-Gurgl, Austria, with one hour’s supply of oxygen to spare.