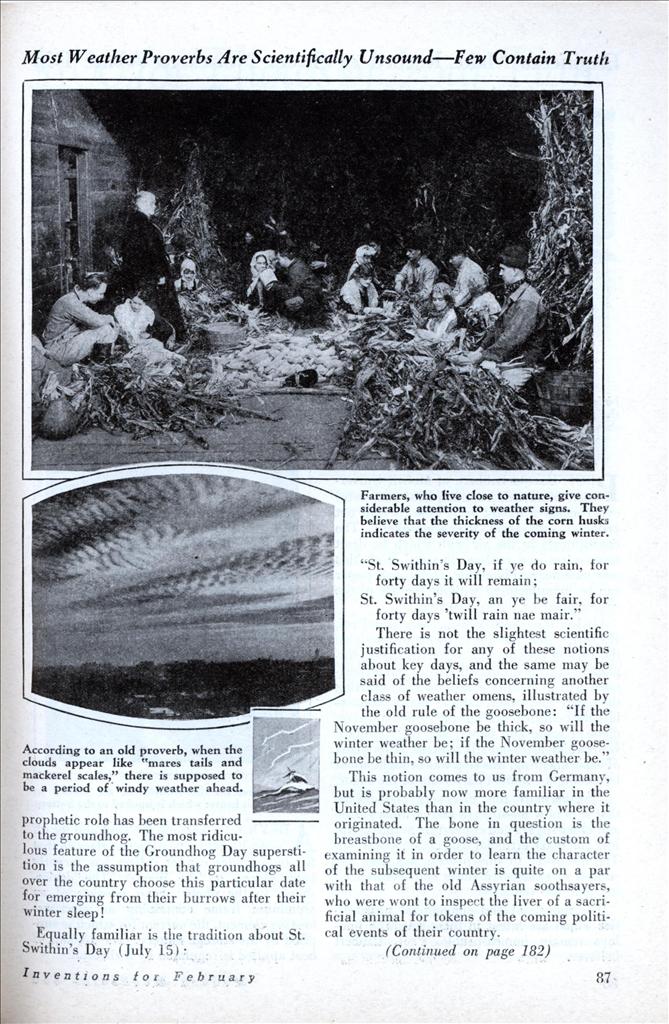 How much truth is there in the old proverbs that cite various signs of Nature as prophetic of tomorrow’s weather? In this article, Mr. Frazer puts these signs to the test of science.

THE sage old farmer, who depends a lot on the weather for the success of his crops, squints up at the clouds and opines, “Mackerel sky, not twenty-four hours dry.” The old sea dog. who must lay his course and set his sails according to the caprices of the weather, surveys the sky and says, “Red sun at night, sailor’s delight; red sun at morning, sailors take warning,” or, “When the wind backs against the sun, dirty weather is sure to come.” The cowboy counts the stars in the ring around the moon and believes that rain will fall before as many days have elapsed as there are stars in the halo.

Such signs are the means by which homely prophets, remembering traditional proverbs, predict the weather for the coming period. Whatever their content of truth or error, one good thing can be said about these time-honored proverbs concerning nature’s weather signs—they are easy to remember, and hence, so far as they embody useful information, they are of service in enabling people to keep such information in mind.

Dr. W. J. Humphreys, of the United States Weather Bureau, who has probably devoted more attention than any other meteorologist to the task of separating the sheep from the goats among these time-honored maxims, was so much impressed with the utility of the proverbial form as an aid to memory that he has made a collection of these proverbs for the purpose of scientific examination. The most widely known of these are the following ones, which are excellent, though not infallible: “Evening red and the morning gray, Sends the traveller on his way; Evening gray and the morning red, Brings down showers upon his head.” “A rainbow in the morning is the shepherd’s warning; A rainbow at night is the shepherd’s delight.”

“When the wind’s in the South, the rain’s in its mouth.” “The higher the clouds, the finer the weather.” ‘Mare’s tails and mackerel scales, make tall ships carry low sails.”

“When the clouds appear like rocks and towers, The earth’s refreshed by frequent showers.”

Unfortunately, at least three-fourths of the weather proverbs now current are sheer nonsense. Many of these delusive sayings owe their origin to the once universal belief that “coming events cast their shadows before them” and that nature supplies innumerable omens of whatever, in the near or distant future, will affect the welfare of mankind. These omens were not, as a rule, supposed to have any physical connection with the events they foreshadowed. Thus a comet was believed to portend the death of a king, but not to have any hand in killing him, and the configuration of the planets at a person’s birth was thought to foretell the events of his life but not actually to control their ¦ ‘ ¦ ….. . . : Most proverbs that involve long-range predictions of weather hark back to this belief in signs and portents, and do not depend upon any meteorological theory, however crude. Among these there are many relating to so-called “key days,” the weather of which was supposed to furnish a clue to the weather of subsequent more or less distant periods. Thus each of the twelve days beginning with Christmas was thought to indicate the weather of one of the twelve succeeding months. There are several old sayings like the following: “Where the wind is on Martinmas Eve, there it will be for the rest of the winter.”

A famous tradition of this class asserts that sunshine on Candlemas Day (February 2) means that cold weather will last another six weeks, while cloudy weather on that day signifies that the winter is over. Originally no animal of any sort was concerned in this superstition, but eventually the idea arose that a hibernating animal comes out of his winter home on Candlemas Day, and either goes back again or remains in the open, according to whether he sees or does not see his shadow. In Europe this creature was said to be a bear or a badger, but in America the prophetic role has been transferred to the groundhog. The most ridiculous feature of the Groundhog Day superstition is the assumption that groundhogs all over the country choose this particular date for emerging from their burrows after their winter sleep!

Equally familiar is the tradition about St. Swithin’s Day (July 15) ; “St. Swithin’s Day, if ye do rain, for forty days it will remain; St. Swithin’s Day, an ye be fair, for forty days ’twill rain nae mair.” There is not the slightest scientific justification for any of these notions about key days, and the same may be said of the beliefs concerning another class of weather omens, illustrated by the old rule of the goosebone: “If the November goosebone be thick, so will the winter weather be; if the November goosebone be thin, so will the winter weather be.” This notion comes to us from Germany, but is probably now more familiar in the United States than in the country where it originated. The bone in question is the breastbone of a goose, and the custom of examining it in order to learn the character of the subsequent winter is quite on a par with that of the old Assyrian soothsayers, who were wont to inspect the liver of a sacrificial animal for tokens of the coming political events of their country.

The various traditions and proverbs to the effect that the severity of the winter may be inferred from such autumnal manifestations as the thickness of corn husks and animals’ furs, the quantity of nuts stored up by squirrels, or the heights at which hornets build their nests, really belong to the same order of ideas, though at first sight they seem more plausible. No clues to the weather weeks or months in advance can be obtained from biological phenomena of any sort, but on the other hand it is true that many animals and plants do react perceptibly to certain weather changes, such as an increase in atmospheric moisture, the darkening of the sky and the like, that point to a coming storm or to some other weather condition of the immediate future, so that some of the proverbs on this subject are fairly well-founded; for example, “When the peacock loudly bawls, Soon we’ll have both rain and squalls.”

Others, however, such as the saying that “a bee is never caught in a shower” and the assertion that various plants always close their flowers before rain, are rules to which there are many exceptions.

Although the moon exercises no control over the weather, the appearance of this luminary is affected in certain ways by the state of the air and by the presence or absence of clouds, and these things, in turn, bear certain relations to approaching weather changes. Hence some of the old rules and proverbs connecting the moon with the weather contain an element of truth. There is a physical explanation for the assertion that “Sharp horns do threaten windy weather,” and the rule about lunar halos, “The bigger the ring, the nearer the wet,” though it refers to an optical illusion, has a rational basis. On the other hand, there is no truth in the proverbs relating to the attitude of the lunar crescent in the evening sky or in those concerning the time when the moon “changes.”

“For the scientific weather prophet, there is just one infallible sign, and that is the barometer, or, in the language of the sea, the “glass.” Barometric readings all over the country, all over the continent and from the high seas, placed on a map of the United States, graphically pictured and timed, enable the forecaster, with his knowledge and experience in air currents, winds, tides, topog- raphy and pressure, to tell you what may happen tomorrow. These data are placed on a weather map to determine the location and movement of “highs” and “lows,” that is, areas of high and low barometric pressure. These movements bring certain typical sequences of weather events—shifts of the wind, sky colors, cloud conditions, rain or snow, and so on.

Experience gained in the field of weather forecasting has led Dr. Humphreys to concoct a number of weather proverbs of his own, all of which contain sound wisdom: “A summer fog for fair, A winter fog for rain; A fact most everywhere In valley and on plain.” “When the morn is dry, The rain is nigh; When the morn is wet, No rain you get.” • “Whene’er the clouds do weave, ‘Twill storm before they leave.” “When the stars begin to hide, Soon the rain will betide.” “When the forest murmurs and the mountain roars, Then close your windows and shut your doors.” “Curls that kink and cords that bind, Signs of rain and heavy wind.”