Physical Culture
Issue: Feb, 1937
Posted in: General, Sexuality
9 Comments on That Grim Law – The Survival of the Fittest (Feb, 1937) 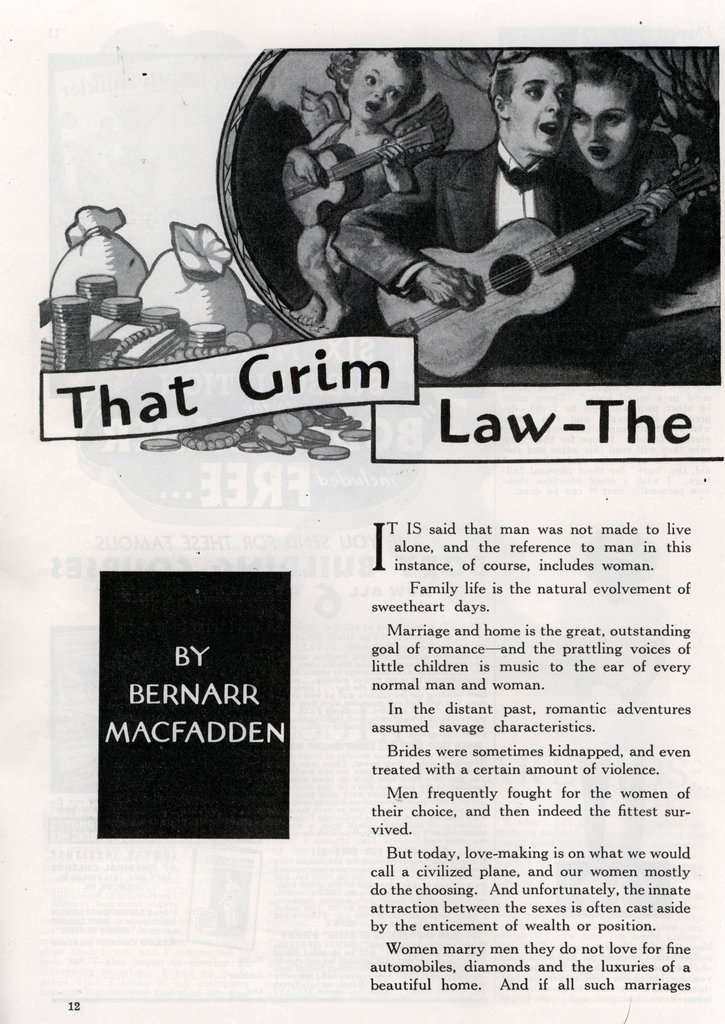 That Grim Law – The Survival of the Fittest

BY BERNARR MACFADDEN
IT IS said that man was not made to live alone, and the reference to man in this instance, of course, includes woman.

Family life is the natural evolvement of sweetheart days.

Marriage and home is the great, outstanding goal of romance—and the prattling voices of little children is music to the ear of every normal man and woman.

In the distant past, romantic adventures assumed savage characteristics.

Brides were sometimes kidnapped, and even treated with a certain amount of violence.

Men frequently fought for the women of their choice, and then indeed the fittest survived.

But today, love-making is on what we would call a civilized plane, and our women mostly i do the choosing. And unfortunately, the innate attraction between the sexes is often cast aside by the enticement of wealth or position.

Women marry men they do not love for fine automobiles, diamonds and the luxuries of a beautiful home. And if all such marriages * could be childless, they would be harmless.

But children from such marriages are always lacking in spirit.

There must be zestful, passionate attraction to cement the ties of marriage.

And the Almighty must indeed be outraged when He sees this rule ignored.

We are often shocked at the reference to a “love child”—but a child that is not conceived with the birthright of an intense affection is indeed to be pitied.

And when marriages become financial bargains, it is difficult indeed to find loyalty and love.

The buyer who uses wealth to purchase feminine attraction frequently learns that love cannot be bought—that the innate cravings of a feminine soul cannot be enslaved even with the marriage bonds.

And that grim law—the survival of the fittest—acts with death-dealing effect when he faces the disloyalty that frequently occurs in such circumstances.