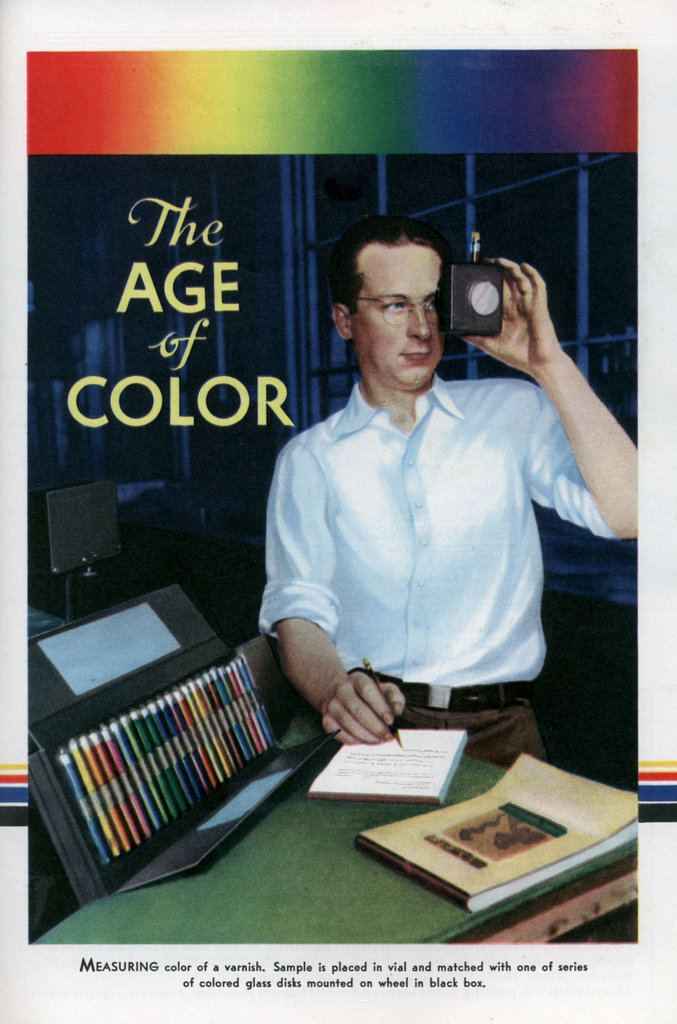 The Age of Color

THE world is spending millions for color today and, as a result, is rapidly changing from a dull, drab sphere into a gay and cheerful place garbed in all the hues of the rainbow.

America alone is using about $50,000,000 worth of dyes a year. These dye-stuffs sell, or help to sell, six or seven billion dollars’ worth of merchandise annually because, to a great extent, we buy what pleases the eye.

Without color, the demand for many everyday articles would decrease or, in some cases, vanish entirely. Changing the color of an article or even the color of its surroundings may induce you to buy it, or refuse to buy it, since color exerts a psychological influence on all of us. More billiard tables were sold when purple felt covers were substituted for green, and the sale of wall mirrors jumped when they were offered in colored glass. A packing house increased meat sales by changing the interior of its coolers from white to turquoise blue and a cafeteria doubled the sale of salads by displaying them on green plates instead of white.

While colors relieve the monotony of our surroundings ;they also exert an emotional effect upon us. Red is regarded as the symbol of war, hate, danger and courage while orange signifies warmth, harvest and autumn. Green is linked with victory, safety and sickness and we associate yellow with cowardice and deceit.

Blue exerts a cooling effect, a fact of which %one manufacturer took advantage in painting workbenches where welding was being done. They were colored light blue to counteract the feeling of heat produced by the welding. The tops were painted a deeper blue to suggest coolness while an orange trim relieved the monotony of the blues.

Howard Ketcham, color consultant for several large manufacturers, has found blue is the favorite color of most American men and red of most women. He has made color surveys for everything from toothbrushes to motorcars and once showed that a red handle sells more ten-cent toothbrushes while amber sells more twenty-five cent ones. He has even determined the color preferences of house flies. Flies like orange, dark yellow and dark blue but shun light green and ivory.

Color is responsible for every sensation made upon the eye. We see shape because of the contrast of one color with another. Color, however, is not a quality of objects. When we look at a blue car, it appears blue simply because its surface reflects chiefly the blue rays of white light and absorbs most of the other colored rays. If it absorbed them all, the car would appear black. If it reflected most of them, you would see a white car.

In his first attempts to capture color, man used the pigments and dyes of nature. He obtained a red pigment from iron oxide or green from copper salts and he got his dyes from woods, berries and various plants. The earth pigments which can withstand high temperatures still provide the colors for ceramic ware.

But obtaining soluble colors such as dyes from natural substances was both unsatisfactory and very expensive. Frequently the colors would not unite with the product which man wanted to color. Or if the early dyer did find something which would unite with the product, perhaps it was not the color he desired. So for hundreds of years only royalty and the very wealthy could afford richly colored possessions.

Today nearly everything we own is decorated with color and the most inexpensive piece of cotton goods may be adorned with most of the hues of the spectrum. This miracle has been wrought largely by coal and chemistry.

When coal is heated, as in making coke, it yields a thick, gummy tar. The residue of this tar, after the volatile substances are driven off, is pitch which we use to make roofing and asphalt. In the middle of the last century, Sir William Perkin, British scientist, tried to make quinine out of one of the constituents of coal tar.

The substance he obtained, when dissolved in water, produced a red solution which imparted a mauve color to various products to which it was applied. Instead of quinine, he had produced the first artificial dye, a dull red color from black, sticky coal tar!

But this was only the beginning. To his amazement, the Englishman found that by varying the chemical treatment he could produce still other colors. Or by starting with a different coal-tar base, yet more hues were obtained. Locked in this evil-smelling, gooey tar were hundreds or even thousands of colors waiting to be released by the magic hand of the chemist.

When coal tar is distilled, it yields different substances at different temperatures. One is benzol, a clear liquid. Another is naphthalene, a white, crystalline solid which, when pressed into a marble, is our familiar mothball. A third is anthracene, closely related to naphthalene. There are others, but these three bases or “crudes” are the starting point for many dyes used today.

When these and other crudes are treated with acids, alkalis and other chemicals, intermediates are obtained. Intermediates are not dyes and they are not crudes. They are the bricks of the color house because, when two or more of them are combined chemically, dyes result, the color depending on the treatments they have received.

Benzol, for example, yields a colorless intermediate, aniline, which, when treated and combined with other intermediates, yields hundreds of dyes. But finding the intermediates to use and the treatment to produce a certain color was a long and expensive process.

One German company spent twenty years and $5,000,000 before it found how to make synthetic indigo, the most widely used textile color today. Almost as much

time and money were spent in developing other colors. Germany made the most rapid progress in solving the secrets of coal tar and, until the World War, much of the dyes used in this country were imported from there.

With the war, dye imports were cut off and America faced a color famine. Out of this acute need eventually developed the American dye industry and the wealth of color we enjoy today, but it was a slow and costly development. E. I. du Pont de Nemours and Company alone spent $40,000,000 in research and experimental and plant equipment in five years before making a penny from any dyestuffs.

Today du Pont makes hundreds of dyes, each of a different chemical structure. There are, all told, about 2,000 separate colors commercially available from all sources, nearly all of them made in America.

But this is not the limit of shades by any means. By combining or blending any two or more of these 2,000 colors, many more thousands are possible. But instead of trying to make more colors, dye men today are struggling to limit the number. To do that they must develop colors which are very fast, very brilliant and not too expensive.

One step in this direction, insofar as pigments are concerned, has been taken with the commercial development by du Pont of an insoluble coloring material yielding strikingly brilliant shades of blue. It is known as “Monastral” Fast Blue and is so close to a pure blue that it is hailed as almost a miracle, a wonder color. Blues hitherto obtainable have all possessed some faults which interfered not only with the production of pure blue hues but also affected the other colors in which blues were used.

This new blue pigment is virtually fade-proof. It is not only very fast to light but is also fast to other color-destroying agents like acids and alkalies. The products to which it can be applied include almost everything into which pigments enterâ€” printing inks, paints, varnishes, enamels, nitrocellulose lacquers, carbon paper, wall-paper, coated and colored papers, coated textiles, linoleum and cement.

The general use of “Monastral” Fast Blue eventually may give faster and more brilliant color to everything from your magazine to your automobile. It is, however, a pigment and not a dye. Dyes cannot be mixed indiscriminately as the artist mixes pigments. And dyes cannot be used at random on any fabric.

A dye must have an “affinity” for the material it colors and since materials differ in physical and chemical structure, there is as yet no universally applicable dye. This is one reason so many dyes are needed. One which can be used to color an animal fiber like wool may not work aj all on a vegetable fiber such as cotton. Even the physical properties of fibers influence the choice of dyes to color them.

Dye chemists classify the colors they produce into groups such as acid, basic, chrome, developed, direct, vat, sulphur and acetate dyes. These group names are derived from the manner in which the colors are applied to material or from the chemical structure of the dyestuff.

Vat dyes are the aristocrats in the field of fast color. These dyes are imprisoned in the fiber and will last as long as the fabric, often becoming brighter and deeper in shade after repeated laundering. At the other end of the scale are the sulphur colors, the cheapest of all, which color the great rank and file of inexpensive cotton goods.

The cost of all this beauty and color which we enjoy today is almost negligible when compared with the cost of the products which the color decorates. The dye in a man’s work shirt, for example, may cost four or five cents, and in his blue serge suit there may be a quarter’s worth of dye.

But that quarter’s worth of dye probably sold the blue serge to the man who wanted that particular shade just as color today sells everything from cars and carpets to clothes and kitchenware.