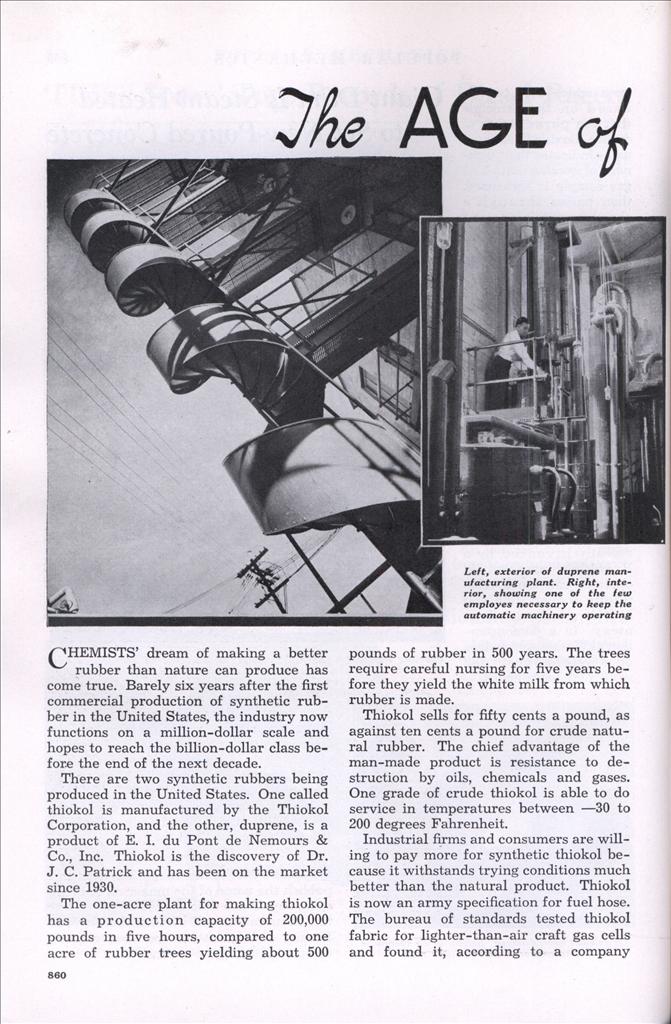 The Age of Man-Made Rubber

CHEMISTS’ dream of making a better rubber than nature can produce has come true. Barely six years after the first commercial production of synthetic rubber in the United States, the industry now functions on a million-dollar scale and hopes to reach the billion-dollar class before the end of the next decade.

There are two synthetic rubbers being produced in the United States. One called thiokol is manufactured by the Thiokol Corporation, and the other, duprene, is a product of E. I. du Pont de Nemours & Co., Inc. Thiokol is the discovery of Dr. J. C. Patrick and has been on the market since 1930.

The one-acre plant for making thiokol has a production capacity of 200,000 pounds in five hours, compared to one acre of rubber trees yielding about 500 pounds of rubber in 500 years. The trees require careful nursing for five years before they yield the white milk from which rubber is made.

Thiokol sells for fifty cents a pound, as against ten cents a pound for crude natural rubber. The chief advantage of the man-made product is resistance to destruction by oils, chemicals and gases. One grade of crude thiokol is able to do service in temperatures between â€”30 to 200 degrees Fahrenheit.

Industrial firms and consumers are willing to pay more for synthetic thiokol because it withstands trying conditions much better than the natural product. Thiokol is now an army specification for fuel hose. The bureau of standards tested thiokol fabric for lighter-than-air craft gas cells and found it, according to a company spokesman, “twenty-five times better than ordinary rubber for preventing the escape of helium gas.”

In its record-breaking flight across the Pacific ocean, the gas tanks of the “China Clipper” were sealed with a thin film of thiokol sprayed on the inside of the tanks.

Thiokol is also used in the printing industry. Printers have long complained that rubber press rollers and blankets swelled because they absorbed the ink chemicals. Today some of the largest American newspapers use thiokol blankets.

All sorts of printing plates, including half tones, are now made out of thiokol. The synthetic product is much lighter than metal and, therefore, can save shipping costs.

According to the makers of thiokol, the synthetic-rubber plates use about half as much ink as metal plates, and they also eliminate “make-ready,” one of the expensive, time-taking steps in the printing industry.

The latest development is a synthetic rubber powder for molding articles of various shapes. Three minutes is all the time required for molding a glossy, smooth, oilproof thiokol product.

The chief ingredients of thiokol are sulphur, salt and natural gas, all of which are abundant in the United States.

Duprene, the other synthetic rubber manufactured in this country, is made of such cheap and common substances as coal, limestone and hydrochloric acid, the latter made from common salt.

The plant recently completed for the manufacture of duprene is practically automatic. Only fifteen employes per shift are required to keep it running at capacity. The annual production is about 1,000,-000 pounds.

The raw material produced by DuPont is “plastic polymer,” the equivalent of smoked sheet rubber. The processing is done by manufacturers to whom it is sold. The preparation for service is done by the same methods and by the same machinery used in the processing of natural rubber.

Most commercial rubber products contain varying amounts of sulphur, pigments, fillers, carbon, antioxidants, etc., which give the finished products special properties. Thus rubber tires differ in composition from inner tubes, and so on.

Duprene can also be endowed with special properties by the addition of various ingredients. In this way, hundreds of uses have been found for man-made rubber. Each use demands specifications which the manufacturer knows how to meet. After the synthetic rubber is compounded with other ingredients it is vulcanized. Then it is ready for service.

One of the great advantages of duprene is the ease of vulcanization. Whereas natural rubber must be vulcanized in the presence of sulphur, duprene requires only heat and pressure to make its composition permanent.

Hundreds of uses have already been found for duprene, but the possibilities are as unlimited as the requirements of industry. Simply by varying the quantity and proportions of the ingredients added to the “crude,” thousands of duprene compositions are made possible.

Duprene can be made to stretch 1,100 per cent its ordinary length and it has a greater “ultimate elongation,” but a slower recovery from stretching than rubber. The ability to return to its original shape makes duprene valuable for printing rolls and printing blankets.

Chemically, duprene has been found very stable and resistant to acids, gases, oils, high temperatures and exposure to direct sunlight. It has a longer life than natural rubber. A sample of natural rubber was immersed in Diesel engine oil at a temperature of 100 degrees centigrade for a test. At the end of four days it had completely disintegrated. A sample of duprene tested under the same conditions showed little effect.

Because of its resistance to high temperatures, duprene is being used as a covering for automobile ignition wires. The temperature under the hood of an auto often reaches 300 degrees Fahrenheit. Certain duprene compositions can withstand a temperature of 350 degrees Fahrenheit. One automobile manufacturer uses duprene in place of a small metal spring in the water-cooling system, because it resists the attacks of antifreeze solutions which had corroded the metal spring. On another car, duprene is used as a grommet where heat and oil are encountered.

Duprene has also been adapted to the manufacture of gaskets, washers and packing; to lining for hose to convey gasoline, oil and kerosene, hospital sheeting and balloon fabric; binder and adhesive for use with leather, cork and felt; gloves for chemical plants and paint factories, as well as dozens of other uses.

Duprene is supplied to manufacturers in three forms, the “plastic polymer” which corresponds to crude rubber; duprene latex, which is a white milky liquid, and duprene cement.

Although duprene was commercialized at a time when natural rubber ranged in price from three to fifteen cents per pound, many manufacturers paid a premium of about one dollar a pound for the synthetic product.

The present high cost of synthetic rubber is due largely to the investment in modern manufacturing equipment, but as production increases, the price will drop proportionately.