This would make for some pretty awesome car chases. 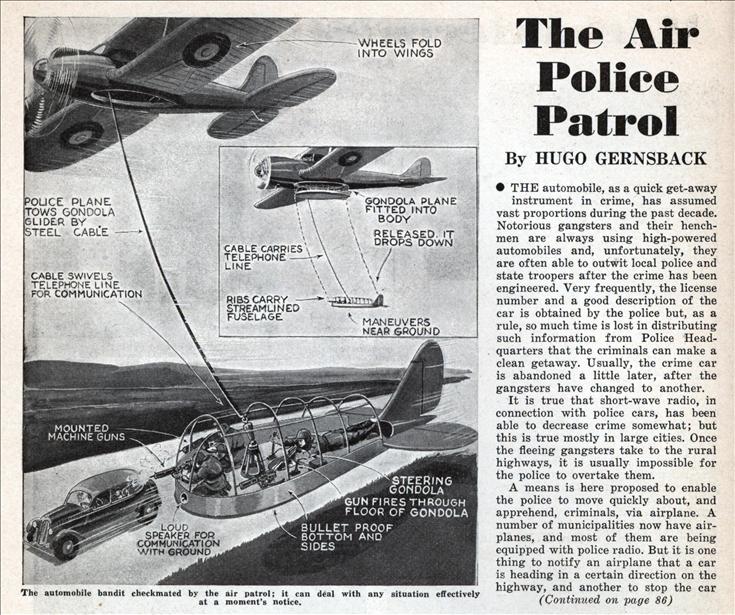 THE automobile, as a quick get-away instrument in crime, has assumed vast proportions during the past decade. Notorious gangsters and their henchmen are always using high-powered automobiles and, unfortunately, they are often able to outwit local police and state troopers after the crime has been engineered. Very frequently, the license number and a good description of the car is obtained by the police but, as a rule, so much time is lost in distributing such information from Police Headquarters that the criminals can make a clean getaway. Usually, the crime car is abandoned a little later, after the gangsters have changed to another.

It is true that short-wave radio, in connection with police cars, has been able to decrease crime somewhat; but this is true mostly in large cities. Once the fleeing gangsters take to the rural highways, it is usually impossible for the police to overtake them.

A means is here proposed to enable the police to move quickly about, and apprehend, criminals, via airplane. A number of municipalities now have airplanes, and most of them are being equipped with police radio. But it is one thing to notify an airplane that a car is heading in a certain direction on the highway, and another to stop the car by airplane. The reason for this is that the modern airplane cannot come too close to the ground and, even if it did, it could do so for only a very brief space of time, measured in seconds. Suppose we have instead a police plane equipped with a separate gondola, which is streamlined, and which can be lowered from the plane by a steel cable. By means of the plane’s engines, the gondola can be lowered or raised quite rapidly, while the plane can fly from 300 to 400 feet above the ground. The gondola, which swings free, except as it is supported by the steel cable, can assume a partially independent motion of its own, because it has a rudder and elevators to steer it, like a glider. It can, therefore, independent of the airplane, veer to the right or the left, and even turn about in the opposite direction, should this be necessary. The mobility of the gondola is, therefore, greater than that of the plane.

Suppose now, that Police Headquarters gets the report that a certain green sedan, with a certain license number, is escaping on a certain highway. The Air-Police Patrol, ready at all times, takes off in a few seconds and will be over the highway far quicker than any automobile could cover the distance. By means of binoculars, the fleeing car is spotted quickly. The gondola is lowered, as soon as the airplane is close behind the automobile and, in a matter of seconds, it is within fifty feet of the ground. The police, if they are sure of their prey take no chances, but immediately fire at the tires and bring the car to a standstill. If the bandits know what is good for them, they will not venture outside of the car because, by the time this system is in vogue, they will understand that they cannot resist or attempt escape without being riddled.

In the meanwhile, the airplane wings overhead in circles, while the gondola does likewise, except that it cuts smaller circles, if required. Of course, in the meanwhile, as soon as the airplane spotted the car, word was flashed by radio to the nearest police station ahead that the fugitives had been overhauled; and thus, without much loss of time, police cars will be roaring to the spot, surrounding the bandit car and taking their prisoners.

The gondola is then again hoisted upwards, the plane departs, and this particular job is finished.

This gives the idea in the rough and, while it may be necessary to do quite a bit of experimenting to perfect the system, there is reason to believe that it is sound and can be put into use immediately, if authorized. It would prove a powerful deterrent to present gangster methods.