Popular Science
Issue: Apr, 1971
Posted in: General
3 Comments on The Amazing Motor That Draws Power From the Air (Apr, 1971)

The Amazing Motor That Draws Power From the Air (Apr, 1971) 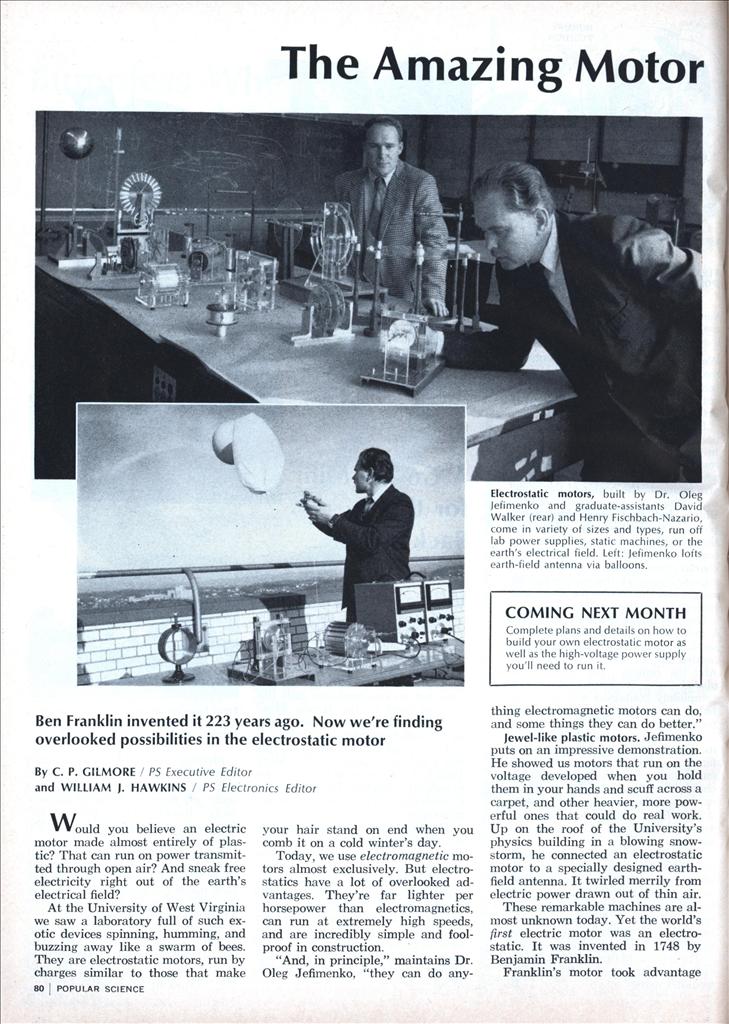 The Amazing Motor That Draws Power From the Air

Would you believe an electric motor made almost entirely of plastic? That can run on power transmitted through open air? And sneak free electricity right out of the earth’s electrical field?

At the University of West Virginia we saw a laboratory full of such exotic devices spinning, humming, and buzzing away like a swarm of bees. They are electrostatic motors, run by charges similar to those that make your hair stand on end when you comb it on a cold winter’s day.

Today, we use electromagnetic motors almost exclusively. But electrostatics have a lot of overlooked advantages. They’re far lighter per horsepower than electromagnetics, can run at extremely high speeds, and are incredibly simple and foolproof in construction.

“And, in principle,” maintains Dr. Oleg Jefimenko, “they can do any- thing electromagnetic motors can do, and some things they can do better.”

Jewel-like plastic motors. Jefimenko puts on an impressive demonstration. He showed us motors that run on the voltage developed when you hold them in your hands and scuff across a carpet, and other heavier, more powerful ones that could do real work. Up on the roof of the University’s physics building in a blowing snowstorm, he connected an electrostatic motor to a specially designed earth-field antenna. It twirled merrily from electric power drawn out of thin air.

These remarkable machines are almost unknown today. Yet the world’s first electric motor was an electrostatic. It was invented in 1748 by Benjamin Franklin.

Franklin’s motor took advantage of the fact that like charges repel, unlike ones attract. He rigged a wagonwheel-size, horizontally mounted device with 30 glass spokes. On the end of each spoke was a brass thimble. Two oppositely charged Leyden jars—high-voltage capacitors —were so placed that the thimbles on the rotating spokes barely missed the knobs on the jars (see photo).

As a thimble passed close to a jar, a spark leaped from knob to thimble. That deposited a like charge on the thimble, so they repelled each other. Then, as the thimble approached the oppositely charged jar, it was attracted. As it passed this second jar, a spark jumped again, depositing a new charge, and the whole repulsion-attraction cycle began again.

In 1870, the German physicist J. C. Poggendorff built a motor so simple it’s hard to see what makes it work. The entire motor, as pictured here, is a plastic disk (Poggendorff used glass) and two electrodes. The elec- trodes set up what physicists call a corona discharge; their sharp edges ionize air molecules that come in contact with them. These charged particles floating through the air charge the surface of the plastic disk nearby. Then the attraction-repulsion routine that Franklin used takes place.

A few papers on electrostatic motors have trickled out of the laboratories in recent years. But nobody really showed much interest until Dr. Jefimenko came on the scene.

The Russian-born physicist was attending a class at the University of Gottingen one day shortly after World War II when the lecturer, a Prof. R. W. Pohl, displayed two yard-square metal plates mounted on the end of a pole. He stuck the device outside and flipped it 180 degrees. A galvanometer hooked to the plates jumped sharply.

“I could never forget that demonstration,” said Jefimenko. “And I wondered why, if there is electricity in the air, you couldn’t use it to light a bulb or something.”

Electricity everywhere. The earth’s electrical field has been known for centuries. Lightning and St. Elmo’s fire are the most dramatic manifestations of atmospheric electricity. But the field doesn’t exist just in the vicinity of these events; it’s everywhere.

The earth is an electrical conductor. So is the ionosphere, the layer of ionized gas about 70 kilometers over our heads. The air between is a rather poor insulator. Some mechanism not yet explained constantly pumps large quantities of charged particles into the air. The charged particles cause the electrical field that Jefimenko saw demonstrated. Although it varies widely, strength of the field averages 120v per meter.

You can measure this voltage with an earth-field antenna—a wire with a sharp point at the top to start a corona, or with a bit of radioactive material that ionizes the air in its immediate vicinity. Near the earth, voltage is proportional to altitude; on an average day you might measure 1,200 volts with a 10-meter antenna.

Jefimenko chose the electrostatic motor for his project because the earth-field antennas develop extremely high-voltage low-current power; and—unlike the electromagnetic motor—that’s exactly what it needs.

The climactic experiment. On the night of Sept. 29, 1970, Jefimenko and Walker strolled into an empty parking lot, and hiked a 24-foot pole painted day-glow orange into the sky. On the pole’s end was a bit of radioactive material in a capsule connected to a wire. The experimenters hooked an electret motor to the antenna, and, as Jefimenko describes it, “the energy of the earth’s electrical field was converted into continuous mechanical motion.”

Two months later, they successfully operated a corona motor from electricity in the air.

Any future in it? Whether the earth’s electrical field will ever be an important source of power is open to question. There are millions—perhaps billions—of kilowatts of electrical energy flowing into the earth constantly. Jefimenko thinks that earth-field antennas could be built to extract viable amounts of it.

But whether or not we tap this energy source, the electrostatic motor could become important on its own.

• In space or aviation, its extreme light weight could be crucial. Jefimenko estimates that corona motors could deliver one horsepower for each three pounds of weight.

• They’d be valuable in laboratories where even the weakest magnetic field could upset an experiment.

In a particularly spectacular experiment, Jefimenko turned on a Van de Graaff generator—a device that creates a very-high-voltage field. About a yard away he placed a sharp-pointed corona antenna and connected it to an electrostatic motor. The rotor began to spin. The current was flowing from the generator through the air to where it was being picked up by the antenna.

The stunt had a serious purpose: The earth’s field is greatest on mountaintops. Jefimenko would like to set up a large antenna in such a spot, then aim an ultraviolet laser beam at a receiving site miles away at ground level. The laser beam would ionize the air, creating an invisible conductor through apparently empty space.

To be sure, many difficulties exist; and no one knows for sure whether we’ll ever get useful amounts of power out of the air. But with thinking like that, Jefimenko’s a hard man to ignore.