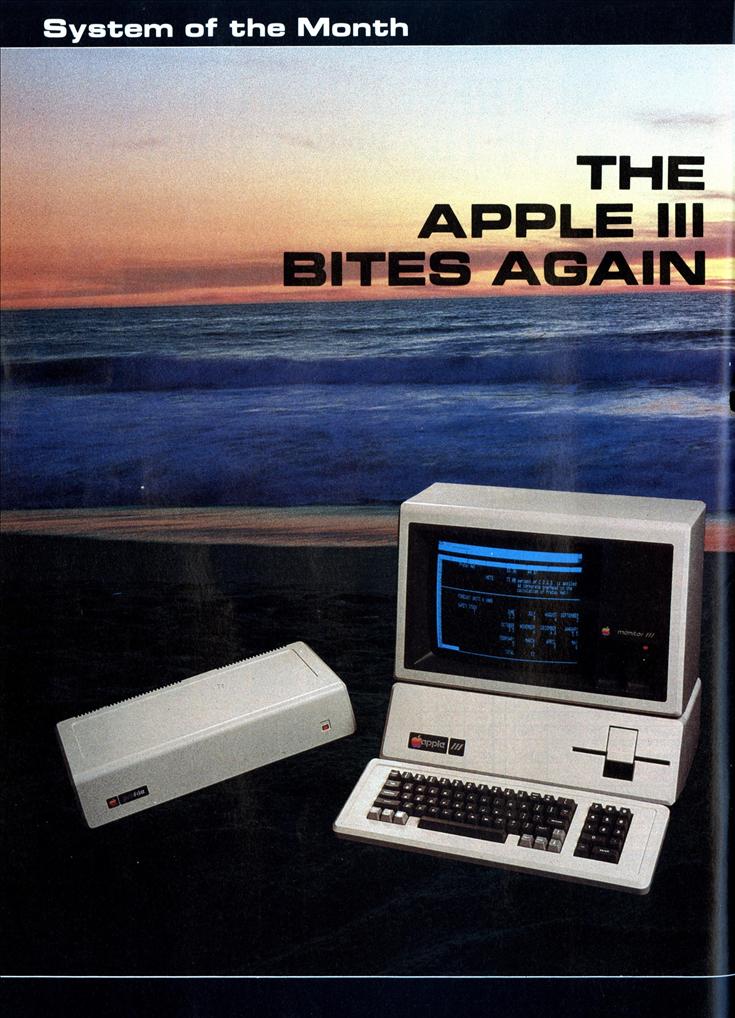 This microcomputer is an attractive, intelligently designed machine, well-suited for many business computing tasks. It combines an appealing packaging arrangement with a superior set of systems software, as compared with most of its existing competition. A 5M-byte hard disk option offers the user a kind of operating convenience merely dreamed of by those stictly confined to floppies.

The main chassis is 17-1/2 in. wide by 18-1/4 in. deep, and weighs 26 pounds. This unit contains the 6502B 8-bit microprocessor integrated circuit, the main processor chip. It runs at 1.4 MHz average, 2.0 MHz peak. Also included are 128K bytes of dynamic RAM, twice the amount found in an Apple II. The number can be doubled yet again—to 256K bytes—with the optional memory expansion feature.

The Apple III’s documentation is exceptional and deserves special note. Manuals are an important part of a technical product and microcomputers have a particular need in this area, since micros are often a new experience for their owners. Apple III manuals are attractively packaged and expertly edited. They contain detailed, step-by-step procedures for beginners; helpful hints and rules-of-thumb for experts, with photographs and illustrations appropriately placed. Most are spiral-bound and sized to rest handily on a waiting ledge behind the keyboard.

The Apple III Owner’s Guide is a 172-page introduction to the computer. Both hardware and software are covered, with special attention to the Filer portion of the operating system. This is appropriate, since Filer is the area in which the Apple III’s operating system diverges most from CP/M. In the last third of the manual are five appendices with detailed information about subjects such as error messages and electrical specifications of the input/output ports.

Each major hardware item is delivered with an installation and use manual. The Apple Business Basic manual occupies some 335 pages in two volumes. The applications program VisiCalc III is delivered with a 300-page user’s manual, a 65-page guide to applications samples (provided on a separate diskette) and an accordian-folded pocket reference guide to the VisiCalc commands.

The Standard Device Drivers manual is a bit overwhelming, if only because the term “drive” is relatively strange in microcomputing The concept of drivers is borrowed from larger computers, and is responsible for much of the power in the Apple III’s operating system. A driver is a special-purpose computer program whose function is to translate the input and output data from applications programs into the particular requirements of a piece of hardware. Each of the disk devices has a driver, as do the keyboard, printer and other peripherals. Drivers allow the program to be ignorant of the specific needs of the hardware, the programmer to concentrate on what the program is doing, rather than how it is accomplished for each separate device.

In Basic, for example, a hardware device can be opened in much the same manner as a disk file, and data transmitted to, or received from, that device. In the Apple III, the concept includes drivers for the audio circuitry, graphic displays and the RS-232 data communications port. Twenty-four such devices can be defined at one time, although practically speaking, no more than a half-dozen or so will fit into the allocated memory space.

Apple III’s Sophisticated Operating System (which generates the unfortunate acronym SOS) is a considerable departure from the Apple II, leaning in the direction of “big computer” software. Disk files can be arranged as a tree structure of catalogs to logically separate applications. This makes a lot of sense in a multi-megabyte, hard-disk drive computer. Floppy disk computers tend to remedy cataloging problems, since only so many files will fit onto a floppy diskette, and they can be labeled with a marker pen.

Data files are managed by a portion of SOS called the Filer, a term familiar to Pascal users, and the utility program giving the most control over the SOS Filer is written in Pascal. This is provided on the Utilities Diskette, one of the system’s most important elements. Various utilities functions (disk formatting, etc.) are presented as a series of nearly bulletproof menu selections—much easier to follow than similar functions found on a typical CP/M computer.

Apple Business Basic is this computer’s major programming language. It diverts from the Applesoft Basic found on the Apple II+, mainly in those areas needed to make it a more capable vehicle for writing and running serious business programs. It was able to complete our Prime Number Cruncher benchmark program (IA Aug 81) in 929 seconds, 31 seconds faster than the Apple II+, The version we tested was equipped with version 1.1 of both SOS and Apple Business Basic.

A tool for editing computer programs as they are entered is often used with a computer such as this. The Apple III handles this with its escape mode: push the ESC key and the cursor can be moved with the four arrow keys to any spot on the screen. Portions of a program line can be rewritten by typing new text. It’s a different, less complex method than that offered by Microsoft’s familiar EDIT statement.

The system design is a blend of aesthetics and solid mechanical engineering—a combination that rarely “just happens.” Rather it is the result of thousands of hours of invention, refinement and expensive tooling. Sitting on a desk, the Apple III resembles a large floppy disk drive with a separate keyboard. This is an illusion, however, since the machine is built around, and within, a single monolithic pressure die casting of aluminum alloy Resembling an automobile engine block, this construction conceals enclosures for its essential electronic bits.

The totally hidden power supply, for example, is behind 1/8 in. of aluminum on five sides and a substantial steel plate on the sixth. This, plus a sobering WARNING label, serves to keep the computer operator from potentially dangerous voltage. The built-in floppy diskette drive is similarly housed. The keyboard and main internal circuit boards are buried so deeply that only patience and the knowledge of which screws to remove will permit access.

There is one case, however, where the user is encouraged by Apple to dismantle the device: when it is time to install a new Peripheral Card. Most of the major add-on peripheral devices (such as the ProFile disk drive) come equipped with such cards, which must be installed in much the same manner as they are in the smaller Apple II. Installation requires removing the Apple III’s cover—a simple operation involving a screwdriver and a pair of aircraft-style quarter-turn Dzus fasteners. This reveals four waiting connectors for Peripheral Cards without exposing other internal workings.

Unlike other computers, such as those utilizing the S-100 bus, it’s important into which of the four slots a new Peripheral Card is plugged. Apple wasn’t too kind to the user in this detail: the slots are not labeled; chances are three-in-four of being wrong on the first try.

If the keyboard on the Apple II was a bit skimpy on key count, the Apple III more than makes up for it. It contains a complete set of 74 keys (42% more than the Apple II), plus a RESET button near the floppy disk slot. Numbers and letters are placed as on an office typewriter, with an extra set of number keys grouped to the right as on desk calcultor. All four arrow keys for moving the cursor around are included—something we point out only because the Apple II lacks the vertical pair.

There’s a push-on/push-off ALPHA LOCK key, a useful kind of SHIFT LOCK affecting only the alphabetic keys (A-Z). Unique to this computer are a pair of extra shift keys marked with the familiar well-chewed apple symbol.

The keyboard is “finger-friendly” in several areas. Keys are arranged in an IBM Selectric-style dish and the tops are finished in a non-glare, mottled finish. Keys located between the SHIFT keys and the front edge of the keyboard are placed a bit lower. Surprisingly, only the four arrow keys are equipped with a tactile feedback and “click” feature so familiar to electric typewriter users.

The main chassis is designed to support the Monitor III video display screen. Hitachi makes the screen and designed it to complement the computer’s appearance.

It has a green, medium-persistence phosphor, and looks to be an excellent vehicle for Apple III graphics capabilities. New to Apple is a full 80-column by 24-line display. (An Apple II emulator mode is available to display the 40 by 24 format.) This display is memory-mapped to provide maximum display speed.

ProFile, the “professional’s file cabinet,” is a 5M-byte hard disk Winchester drive, manufactured by Seagate Technology, it fits atop the Apple III to form a tall pedestal for the video monitor. The disk drive iteself is tiny, taking up about a third of the ProFile unit’s volume. (Power supply and interfacing electronics fill out the rest of the space.) The data is contained on both sides of a pair of 5-1/4-in. oxide-coated aluminum disks whirling at 60 revolutions-per-second. The 95 mS seek time is about average for the 5-1/4-in. units, somewhat slower than some larger, more expensive ones. It is, however, many times faster than Apple III’s built-in floppy diskette drive. Oddly, there is no practical way to define the ProFile as the system’s “boot” device, a trick other manufacturers have found to take full advantage of the faster Winchester operation.

Adding a high-capacity disk drive such as the ProFile to a previously floppy-equipped machine literally transforms the personality of the computer. Those who have thumbed in vain through stacks of mislabeled floppy diskettes, searching for an important program or data file, can appreciate the ease of simply typing CAT and finding the program or file. ProFile can hold 35 diskettes of data, and costs a great deal less than 35 diskette drives (which could hardly be connected at once in any event).

Computer data must be “backed up,” however, and with a ProFile this involves 35 separate copying operations onto floppy diskettes—a tedious and time-consuming operation.

Lots of hardware upgrades are available from Apple. A second floppy diskette drive, termed the Disk III, costs $495. Alternately (or additionally), the 5M-byte ProFile disk drive is available for $3,499—just $4 more than the computer itself. The Silentype III thermal printer is $350, an additional 128K bytes of memory is $800.

Business Graphics III software lists for $175, and Pascal III for $250 plus an additional $75 for a diskette of Pascal Development Tools. The VisiCalc III spreadsheet analyzer is likely to be the best friend $250 can buy for this machine.