Mechanix Illustrated
Issue: Jun, 1946
Posted in: Aviation
Tags: helicopters, Sikorsky
No Comments on The Army’s famed “pinwheel” is now on the market for civilians! (Jun, 1946) 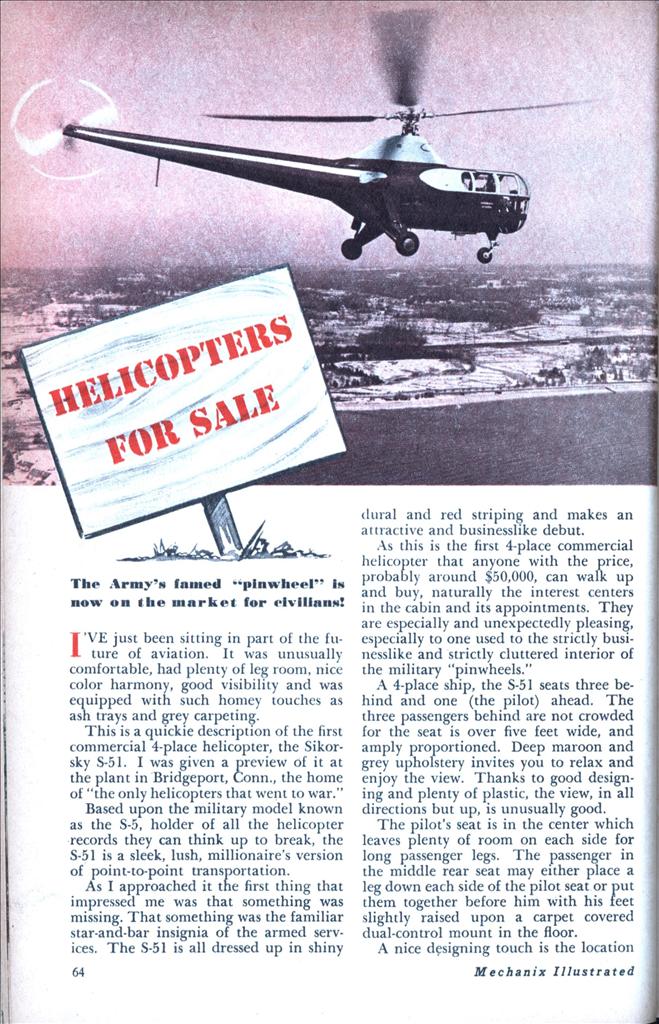 The Army’s famed “pinwheel” is now on the market for civilians!

I’VE just been sitting in part of the future of aviation. It was unusually comfortable, had plenty of leg room, nice color harmony, good visibility and was equipped with such homey touches as ash trays and grey carpeting.

This is a quickie description of the first commercial 4-place helicopter, the Sikorsky S-51. I was given a preview of it at the plant in Bridgeport, Conn., the home of “the only helicopters that went to war.”

Based upon the military model known as the S-5, holder of all the helicopter records they can think up to break, the S-51 is a sleek, lush, millionaire’s version of point-to-point transportation.

As I approached it the first thing that impressed me was that something was missing. That something was the familiar star-and-bar insignia of the armed services. The S-51 is all dressed up in shiny dural and red striping and makes an attractive and businesslike debut.

As this is the first 4-place commercial helicopter that anyone with the price, probably around $50,000, can walk up and buy, naturally the interest centers in the cabin and its appointments. They are especially and unexpectedly pleasing, especially to one used to the strictly businesslike and strictly cluttered interior of the military “pinwheels.”

A 4-place ship, the S-51 seats three behind and one (the pilot) ahead. The three passengers behind are not crowded for the seat is over five feet wide, and amply proportioned. Deep maroon and grey upholstery invites you to relax and enjoy the view. Thanks to good designing and plenty of plastic, the view, in all directions but up, is unusually good.

The pilot’s seat is in the center which leaves plenty of room on each side for long passenger legs. The passenger in the middle rear seat may either place a leg down each side of the pilot seat or put them together before him with his feet slightly raised upon a carpet covered dual-control mount in the floor.

A nice designing touch is the location of the radio phone jack fittings behind the pilots and passengers’ heads, eliminating head-set cords dangling before your eyes.

Excellent cabin air-control and adequate defrosting of the pilot’s windows are handled by a heating and ventilating system of the combustion type which can be used whether the helicopter’s engine is running or not.

There are several interesting points about the performance of the S-51. The centrifugal load on the rotors is equivalent to five tons. The tip speed of rotors this size hits as high as 300 m.p.h. which is plenty for a “prop” with blades 24 feet long. When you add the forward speed of the aircraft to the rotor tip on the forward sweep of the cycle, you jack it up considerably. This fact so far has prevented helicopters from attaining great for- ward speed. It is not that engineers do not think greater forward speeds will eventually be reached, but the fact that the great diameter of the rotor produces such great tip speeds to be added to the forward speed of the blades, that compressibility becomes, at least for the present, a barrier difficult to overcome.

questions regarding the difficulty of the layman learning how to fly the S-51 a member of the Sikorsky staff emphatically denied the popular belief that “pinwheel” flying is a sport only for supermen. As he put it, all other modes of transportation commonly move forward only while the helicopter moves in all directions, in a global sphere of motion, which merely indicates the need for accuracy and practice in moving in all directions instead of merely forward.

With the power delivered by the Pratt & Whitney Wasp Junior engine rated at 450 B.H.P. or 2300 R.P.M. at 2300 feet, the S-51 can lift its own 3650 lbs. of weight plus 1250 lbs. of useful load of fuel and passengers including pilot and baggage. The military version known as the S-5 has lifted and hovered with a load of eighteen passengers hung all over it like beans on a bush.

The controls have been simplified to the minimum for the benefit of the pilot. The conventional appearing control stick directs the heading- of horizontal flight and a second control lever to his left governs the changes in vertical flight and hovering. The grip on this “lift” control turns with the wrist and constitutes the throttle in the manner of that of a motorcycle. The instrument -“panel” rises from the floor directly before him and consists of a column less than a foot wide terminating in an oval panel slightly wider mounted above it at just below eye level. Within the oval are mounted the flight instruments while up and down the column are grouped radio, light and gauge switches.

The market for the first commercially manufactured 4-place “pinwheel” should be at least the most varied if not the biggest for a certain type of aircraft. During the war, Sikorsky’s aircraft were continually accomplishing new chores, and many uses so pioneered, find their counterparts in civilian life. The S-51 could easily be converted into a two litter “airambulance” if need be, it could be used ideally for aerial photography as a sort of hovering tripod. Its use in point-to-point package delivery is obvious while its hovering ability and load carrying power fit it into such service as forest patrol, pipe line inspection and maintenance, commercial fishing reconnaissance, post office shuttle, ranch supervision and game census. With a few items of special equipment added it is ready made for wire laying, crop dusting, timber appraisal and sea rescue.

Years of experience are behind the S-51. Engineers, pilots, and passengers all pooled their suggestions along with those of service pilots of the “only helicopters that went to war.” When the lift lever of the S-51 was pulled the first time, they hit the jackpot!—By C. B. Colby.