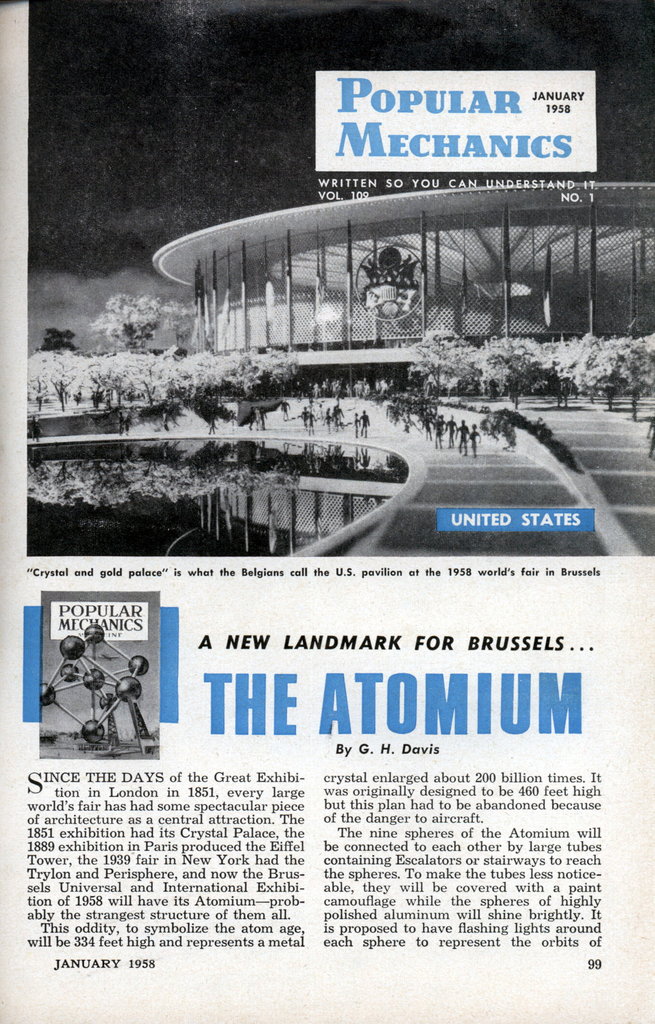 A NEW LANDMARK FOR BRUSSELS…

SINCE THE DAYS of the Great Exhibition in London in 1851, every large world’s fair has had some spectacular piece of architecture as a central attraction. The 1851 exhibition had its Crystal Palace, the 1889 exhibition in Paris produced the Eiffel Tower, the 1939 fair in New York had the Trylon and Perisphere, and now the Brussels Universal and International Exhibition of 1958 will have its Atomiumâ€”-probably the strangest structure of them all.

This oddity, to symbolize the atom age, will be 334 feet high and represents a metal crystal enlarged about 200 billion times. It was originally designed to be 460 feet high but this plan had to be abandoned because of the danger to aircraft.

The nine spheres of the Atomium will be connected to each other by large tubes containing Escalators or stairways to reach the spheres. To make the tubes less noticeable, they will be covered with a paint camouflage while the spheres of highly polished aluminum will shine brightly. It is proposed to have flashing lights around each sphere to represent the orbits of electrons around the atom nucleus. Each sphere will be 59 feet in diameter, some being provided with two floors and others with three. Inside the majority of the spheres will be exhibitions available to the public.

Up the central shaft will run an elevator capable of carrying about 20 persons per trip. This elevator will carry people to the topmost sphere where they will find a first-class restaurant and a magnificent view. From here they will be able to see not only the entire fair grounds but the beautiful wooded country around Brussels, the Royal Palace of Laeken and, in the far distance, the field of Waterloo.

The Atomium will have a complete system of ventilation as the interior of the spheres would otherwise get very hot on summer days. Each sphere will be electrically lighted and there will be glass-fiber portholes to let in daylight.

Both the United States and Russia have reserved spheres in which they will show atomic energy for peace in many phases. Great Britain, France, Italy and many other countries will be exhibiting in other spheres, while the base sphere will be used for a Belgian exhibit.

Many engineering problems have had to be overcome in the designing and building of the Atomium, particularly the main foundation at the base of the central shaft. At one time rumors were circulated that there had been a serious cave-in, but the engineers on the spot assured me that this was untrue and that the foundations were fully capable of supporting nearly double the weight of the finished structure and a big crowd in the spheres. Certainly, the shaft stood solid and straight to the sky when I viewed it, though it only had its lowest sphere in position at the time.

The designers also had to guard against wind pressures which may be considerable on such an unconventional structure. Again I was assured that wind-tunnel tests have proved conclusively that the finished building will be well able to withstand gale-force winds of 112 miles per hour, far greater than any ever experienced in the area. At night the Atomium spheres will provide a glittering and beautiful spectacle with the gigantic globes sparkling with a vast number of points of light.

Of all the foreign exhibits that will be temporarily planted on Belgian soil during this world’s fair, the largest area will be occupied by the United States with a pavilion and adjacent grounds covering 29,700 square yards. The great circular pavilion will be the largest free-span circular building in the world. The pavilion is 340 feet in diameter and 90 feet high and has an adjacent theater that will seat about 1000 persons.

This “crystal and gold palace,” as the pavilion has been described, will be constructed chiefly of plastic and steel and topped with a plastic suspended roof resembling a bicycle wheel. The roof will be attached only to a rim connected with an inner metallic ring by steel cables in tension. The ceiling, also suspended, will be of metal mesh permitting light to flood the pavilion.

The outer ring of this huge “bicycle wheel” will rest upon two concentric rows of gilded steel columns. The walls will be hung between the columns and made of cellular-plastic “honeycomb,” sealed with an undulating plastic cover. Present plans also suggest there will be hanging gardens around the building.

The second floor will present an uninterrupted space about 60 feet wide overlooking the interior garden on one side and directly connected with exterior gardens and a balcony. The classic simplicity of the pavilion will be enhanced by The Great Seal of the United States, of enormous dimensions, placed over the main entrance. A colorful note will be the flags of all the states flying from the building.

The pavilion is circular to conform with the shape of the site and was designed by Edward D. Stone of New York.

The United States pavilion has been called dignified and impressive, possibly because it does not follow the “weird and wonderful” modernistic designs of several of the other countries. The exhibit is costing approximately $15,000,000.

The Swiss section of the exhibition will take the form of a group of pavilions joined like the cells of a beehive. A small lake in the center of the pavilions reminds visitors of the lakes and other vacation features of Switzerland. Inside the Swiss buildings will be more reminders of the rugged grandeur of a land that has been called “the playground of Europe.” The exhibits will also include products of Swiss industry (especially watchmaking) and the wonders of its civil engineering in building enormous dams and tunnels high in the mountains. Considerable space will be devoted to agriculture and also the culture and history of the country.

The French building, of somewhat bizarre design, will be made of metal and prefabricated concrete panels. It is designed to give an impression of columns and wires and tends toward the modern trend in French architecture. The chief architect is M. Guillaume Gillet.

The interior of the French pavilion will hold exhibits of engineering, handicrafts and agriculture as well as cultural displays. Special space will be devoted to Paris and a typical high-class French restaurant.

Canada’s exhibit will be housed in an almost square pavilion that will contain a movie theater, a large restaurant, cocktail lounges and a coffeehouse. Sixty Canadian students will be in attendance to explain to visitors all the numerous exhibits, both agricultural and industrial. Canada, long regarded as an agricultural country, will put special emphasis on its rapid industrial development and great mineral wealth.

Just across the way from the United States section of the exhibition will be the square glass-roofed U.S.S.R. building. This massive concrete, steel and aluminum structure will surround a gigantic statue of Lenin. The pillared entrance to the pavilion will have wide steps and above it a large hammer and sickle.

When I viewed the partly constructed Russian building it gave me the impression of rather unimaginative solidity compared with the lighter touch introduced by many of the other nations. It seems to typify the heavy decorative type of architecture of the Victorian era which is so characteristic of the present architecture of many of the large buildings in Moscow.

The Russians, with their usual reticence, have not announced much detail of what their building will contain, but it has been stated unofficially that many items will be exhibited that have not previously been released for exhibition or shown to the Western World. There will be tremendous emphasis on Russian progress in civil engineering, atomic energy (this will also be shown in one of the spheres of the Atomium) and the arts and sciences. It is probable that some material will be included on the Russian satellite.

Another structure that will no doubt become one of the outstanding features of the Brussels fair is the large footbridge which traverses the foreign section of the exhibition. It is divided into two walks with a central open space which is 39 feet wide. The bridge will be 49 feet high and 1312 feet long.

In addition to organizing the fair, industrious Belgians are feverishly constructing new highways, bridges and railroads to handle the traffic. They are also encouraging international exhibitions in Brussels which cannot be accommodated at the fair. Coincident with the ‘world’s fair but separate from it will be the annual International Inventors’ Exhibition, opening on June 6 for a month. Its president, Paul Quintin, recently toured the United States inviting American inventors to submit their entries and said he expects some 1000 inventions to be accepted for exhibit and for sale or license to manufacturers attending the show.

One thing is certainâ€”all roads in Europe this year will lead to the great world’s fair in Brussels.