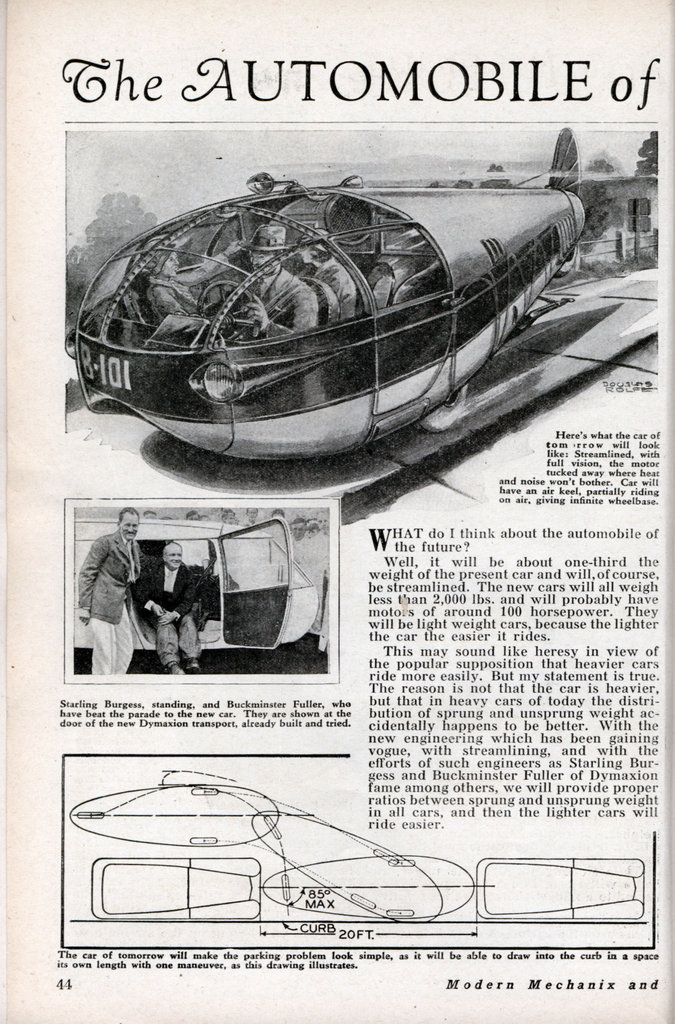 The AUTOMOBILE of the Future

Bill Stout, Detroit inventive pioneer who built the first cantilever wing plane, the first tri-motor, and who has worked for Henry Ford in an advisory capacity, here tells what the car of tomorrow will be like.

by WM. B. STOUT As told to Paul Weber

WHAT do I think about the automobile of the future?

Well, it will be about one-third the weight of the present car and will, of course, be streamlined. The new cars will all weigh less than 2,000 lbs. and will probably have motors of around 100 horsepower. They will be light weight cars, because the lighter the car the easier it rides.

This may sound like heresy in view of the popular supposition that heavier cars ride more easily. But my statement is true. The reason is not that the car is heavier, but that in heavy cars of today the distribution of sprung and unsprung weight accidentally happens to be better. With the new engineering which has been gaining vogue, with streamlining, and with the efforts of such engineers as Starling Burgess and Buckminster Fuller of Dymaxion fame among others, we will provide proper ratios between sprung and unsprung weight in all cars, and then the lighter cars will ride easier.

Just what is this new engineering? Let’s explain it.

The development of the airplane has given rise to an entirely new type of engineering, which we may call “strength-for-weight” engineering, known as “stress analysis.”

During the depression when airlines are largely out of the market, we airplane engineers have kept ourselves occupied in a very significant way. We have turned airplane engineering to other types of construction. Our absolutely new data on the use of light weight materials, our patiently acquired knowledge of wind resistance and aerodynamics is being applied to the design of these cars of tomorrow, and to locomotives, motor trucks, whole trains and other things.

Now the phrase “Stress analysis” simply means an investigation and accurate estimation of the stress to be applied to every piece of material that goes into the completed machine; and construction of every part to meet its own stress.

This is something transportation engineers have never done before except in aircraft.

Every engineer in the game today knows how an automobile is built: The makers lay out a steel frame, hang an engine on it, put a steel box over that, bolt the whole thing together and then add lines to please the buyer’s eye. Very seldom is there any effort to analyze the functions which the various pieces of metal, wood, glass and rubber must perform.

Like Topsy in Uncle Tom’s cabin, the design is the result of merest chance. The engineer used to guess at the proper size for a given part, had a casting made, and inserted the part.

Then, if it broke, he made the next one twice as heavyâ€”and often the second piece, though twice as heavy, might be only half again as strong.

Stress analysis will end this hit and miss system. Every part of the car of tomorrow will be made specifically for bearing the specific stress which it must support when the vehicle is in operation.

The new Dymaxion car produced in the east is a good example of what can be done when old horse-and-buggy notions are discarded. The car of today is really nothing but an elaborated horseless carriage, brought to the perfection of its final limitations.

The ideas of Mr. Starling Burgess and Mr. Buckminster Fuller, two enterprising New York naval architects, as embodied in their unique Dymaxion, which underwent trials a couple of weeks ago, must in final analysis be proved by usage, but they are none the less interesting.

Mr. Burgess, a famed yacht designer, is also one of the earliest airplane engineers, having designed and flown the Burgess-Dunne tailless biplane years ago. His idea is unique in using rear wheel steering, allowing fine parking ability and ability to turn in the car’s own length. And the Dymaxion is planned to have infinite wheel-base since the wind on her V-keel (inverted) is planned to lift the rear wheels off the road, allowing air rudder steering.

Stress analysis, aerodynamics are already being felt in automobile circles, and if my having built the first bat-wing airplane ten years ago (the type just now heralded as the coming thing) or if I have predicted the future accurately in designing the first tri-motor cantilever wing air transport which is now accepted as standard, I may be pardoned for feeling that the car of tomorrow will look much like the engine nacelle of a dirigible, that it will be very light and that every part will be hundreds of times stronger than the present materials used in the old fashioned unscientific horse-and-buggy type car we have grown accustomed to.