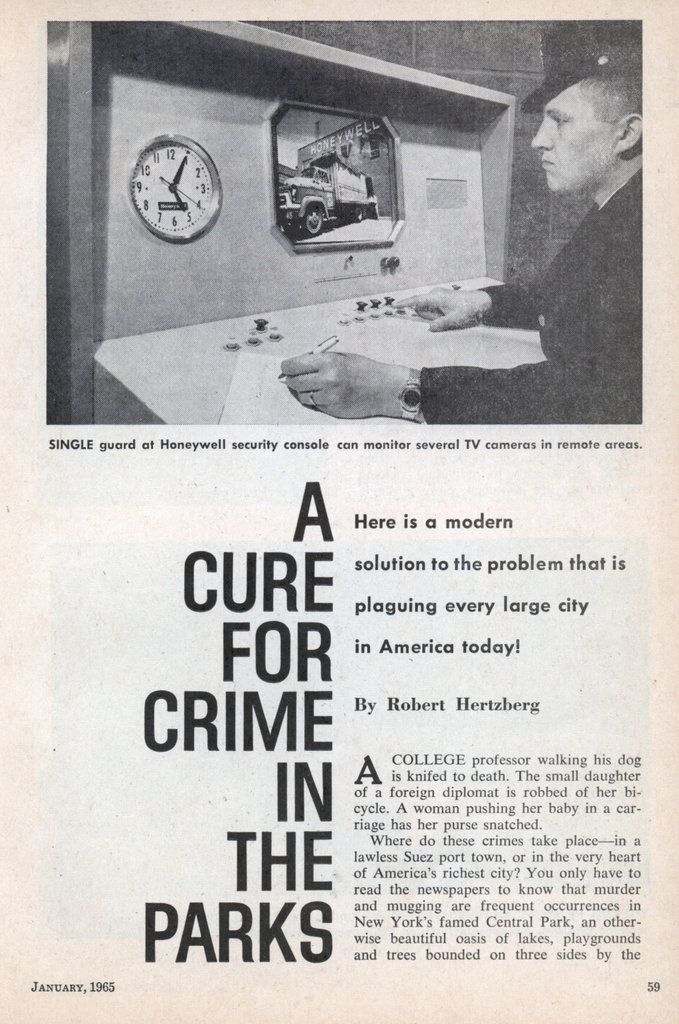 The police do their best, but they can’t be everywhere at once in this verdant park. They need help in the form of a surveillance system of some kind. And it isn’t necessary to dream up a Buck Rogers-type “seeing eye.” The system already exists; it is called “closed circuit television,” or CCTV. A network in a park might be expensive, but what is “expensive” in terms of human life and safety?

In a CCTV installation, small television cameras almost identical in size and appearance with amateur 8mm movie instruments are set up on poles outdoors or over doorways or in walls indoors. They are fitted with wide-angle lenses so that they can scan or “see” a considerable area, and they are connected by coaxial cables to a central monitoring office. Here, depending on the number in use and the nature of the surveillance problem, the cameras are either hooked permanently to individual viewing receivers or are switched onto a single screen at the discretion of the monitor. These arrangements are in regular use in apartment houses for identification of visitors, in parking lots for traffic control, in military establishments for general security measures, etc.

It certainly seems feasible to extend CCTV to a place like Central Park and to tie the system into the Police Department’s highly efficient radio net. With cameras mounted atop light poles in strategic locations, a monitoring officer in the police station now in the pa/k would have a pretty good view of everything taking place within range of the electronic eyes. If he sees anything suspicious, he has only to alert the nearest patrol car, which would be on the spot in minutes. It would probably take only a dozen or so fast pinches by the roving cops to convince professional muggers and snatchers that Central Park is no longer safe for them.

The scheme presents no technical problems. Transistorized TV cameras are compact, require very little juice, can be left on indefinitely, and are almost as effective under street-lamp illumination as in bright daylight because the images they “see” are amplified electronically. The poles and the power lines are already available. Stringing a few miles of coaxial cable, which is about the same diameter as common lamp cord, is a simple job for telephone company linemen.

There is a good possibility that this cable might not be needed at all. Instead, use might be made of the “carrier” method of superimposing the electronic signals from the CCTV cameras onto the power lines that now bring energy to the overhead road lights in the park, and plucking the signals off the line at the police station. This stunt has been used for many years to provide free telephone circuits between power generating plants and way stations in remote areas. It is also in regular use in inexpensive “wireless” intercoms” that are merely plugged into wall outlets and permit excellent two-way voice communication between various points in a home or a place of business.

Crime programs have long been a staple on TV. Now, with the installation of this CCTV system in our parks, the real thing may soon be shown, helping overworked police maintain order day and night.