Popular Science
Issue: Jul, 1936
Posted in: Bicycles, Sign of the Times, Sports
5 Comments on The Bicycle Comes Back (Jul, 1936) 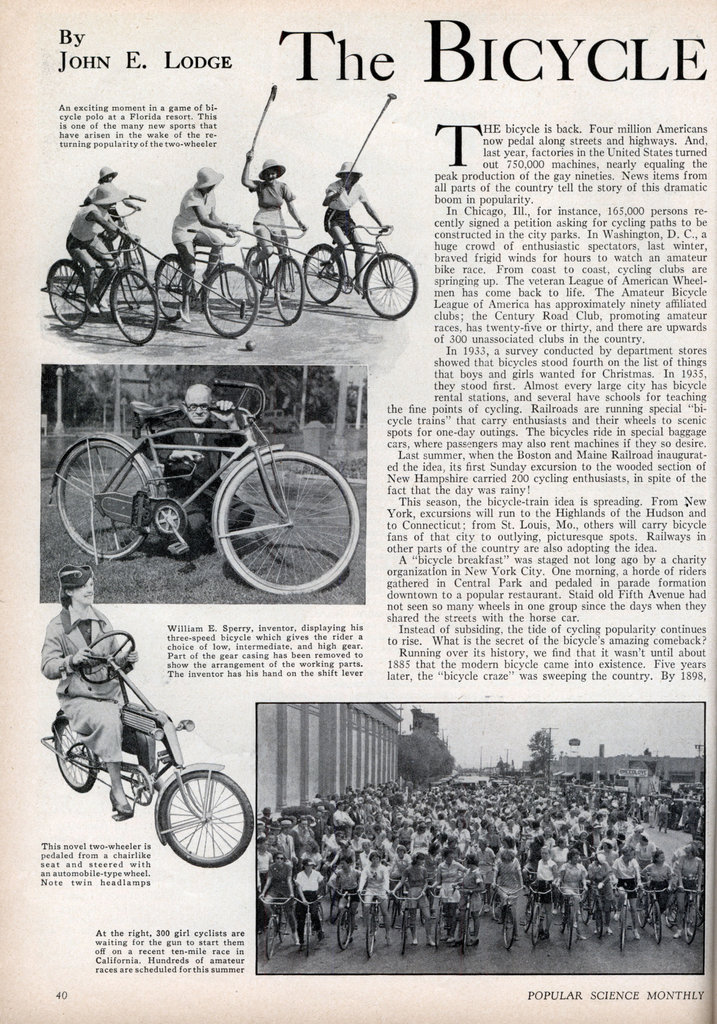 The Bicycle Comes Back

In amazing revival of fad of the nineties

THE bicycle is back. Four million Americans now pedal along streets and highways. And, last year, factories in the United States turned out 750,000 machines, nearly equaling the peak production of the gay nineties. News items from all parts of the country tell the story of this dramatic boom in popularity.

In Chicago, Ill., for instance, 165,000 persons recently signed a petition asking for cycling paths to be constructed in the city parks. In Washington, D. C, a huge crowd of enthusiastic spectators, last winter, braved frigid winds for hours to watch an amateur bike race. From coast to coast, cycling clubs are i springing up. The veteran League of American Wheelmen has come back to life. The Amateur Bicycle League of America has approximately ninety affiliated clubs; the Century Road Club, promoting amateur races, has twenty-five or thirty, and there are upwards of 300 unassociated clubs in the country.

In 1933, a survey conducted by department stores showed that bicycles stood fourth on the list of things that boys and girls wanted for Christmas. In 1935, they stood first. Almost every large city has bicycle rental stations, and several have schools for teaching the fine points of cycling. Railroads are running special “bicycle trains” that carry enthusiasts and their wheels to scenic spots for one-day outings. The bicycles ride in special baggage cars, where passengers may also rent machines if they so desire. Last summer, when the Boston and Maine Railroad inaugurated the idea, its first Sunday excursion to the wooded section of New Hampshire carried 200 cycling enthusiasts, in spite of the fact that the day was rainy!

This season, the bicycle-train idea is spreading. From New York, excursions will run to the Highlands of the Hudson and to Connecticut; from St. Louis, Mo., others will carry bicycle fans of that city to outlying, picturesque spots. Railways in other parts of the country are also adopting the idea.

A “bicycle breakfast” was staged not long ago by a charity organization in New York City. One morning, a horde of riders gathered in Central Park and pedaled in parade formation downtown to a popular restaurant. Staid old Fifth Avenue had not seen so many wheels in one group since the days when they shared the streets with the horse car.

Instead of subsiding, the tide of cycling popularity continues to rise. What is the secret of the bicycle’s amazing comeback?

Running over its history, we find that it wasn’t until about 1885 that the modern bicycle came into existence. Five years later, the “bicycle craze” was sweeping the country. By 1898, American manufacturers were producing approximately 1,000,000 machines a year. Factories were humming; every village had its thriving bicycle shop.

Then interest waned. A blight seemed to attack the industry. By 1904, production had dropped to 200,000 machines, and thousands of bikes were reposing with flat tires and rusty spokes in cellars and attics, woodsheds and barns. The bicycle’s day seemed to be over.

Various explanations have been advanced. About 1932, it is pointed out, publicity agents for Hollywood movie stars began to run out of ideas for “different” pictures that would be printed in newspapers and magazines. The actors and actresses had been shown engaging in every form of athletics, wearing almost every known costume, and riding in almost every kind of motor vehicle. The publicity men hit on the idea of having their stars photographed riding bicycles. Almost overnight, Hollywood became “bicycle conscious.” What started as a mere publicity stunt, turned into an authentic cycling craze.

One prominent actor pedals ten miles between his home and the studio twice a day, rain or shine. Some Hollywood stars adopted the bike as a pleasant form of exercise, others as an easy way to pedal off a few excess pounds. But most of them continued to ride because they had discovered that cycling was fun.

The bicycle craze spread up the California coast to San Francisco. Society leaders took up cycling as a novelty, and ended by adopting it as a regular activity. The popularity of cycling spread inland. Before it could reach the Atlantic coast, Boston, New York, and Washington had already been bitten by the bicycle bug from another direction.

During the depression, many people who formerly had traveled abroad, saved money by a trip to near-by Bermuda. Here, automobiles are taboo and bicycles abound. The American tourists caught the cycling craze, brought it home, and spread it throughout the East.

During A Century of Progress Exposition, in 1934, a “bicycle day” brought 25,000 persons pedaling through the gates into the grounds on the Chicago lake front. Today, hardly a city or state is untouched by the bicycling wave which has swept the country.

Typical of the response of manufacturers to the growing demand for new and better bicycles is one streamline machine distributed by a leading mail-order house. Built on rakish lines, it has the seat, the luggage carrier, the framework, and even the pedals made in streamline design. It has a built-in speedometer, horn, and headlightâ€”with a battery concealed in the broad upper bar of the frameâ€” a red-glass rear reflector, and a special rubber-tipped stand bar which swings down against the ground and holds the machine upright when it is parked.

SEVERAL makers have introduced a combination horn and light. The accessory is housed in a streamline case which clamps onto the handlebars, the light bulb and reflector in front and the electrically operated horn at the rear. A button placed near one of the handlebar grips operates the horn.

Another ingenious combination bicycle accessory is a lock with a reflector which serves as a tail-light. The device is attached to the framework at the back wheel with the reflector pointing to the rear. By pressing a small handle, the cyclist can snap a strong metal rod between the spokes of the wheel, thus locking the machine when it is left unguarded. Only one who knows the combination of the lock and turns the handle in the correct manner can unlock the wheel.

Another type of lock is housed in the fork crown of the front wheel. When a key is turned, the front wheel is locked in place at such an angle that the bicycle cannot be ridden or wheeled away.

Probably the most radical innovation in bicycle design is a new streamline two-wheeler that can be pedaled from a comfortable sitting position in a rubber-cushioned, chairlike seat, and guided with an automobile-type steering wheel. It boasts balloon tires, twin headlights, and a tail-light. Small-diameter wheels and an elongated body give it a low center of gravity to minimize wabbling and the danger of spills.

Bicycle trailers form another field in which inventors have been busy. Not long ago, a Chicago mechanic produced a collapsible trailer for use on bicycle tours. Clamped to the frame of the bike by a metal connecting rod, the novel trailer weighs less than fifty pounds and is only three feet long. It is built of Wood in the form of a small box sliding into a larger one. At night, it can be extended lengthwise into a comfortable six-foot bunk.

At an eastern seaside resort, a life-saving trailer made its appearance last summer. Essentially a stretcher on wheels, the trailer is quickly attached to a bicycle for emergency runs from beach life-saving stations.

IN THE wake of the bicycle’s rising popularity have come a number of exciting new sports. Bicycle polo, for instance, has appeared in many parts of the country. At Palm Springs, Calif., the playground of the movie stars, cycling and archery have been combined. Teams of two contestants each, riding on tandem machines, circle around a fixed target. The “pilot” sits on the rear seat and guides the machine while the archer aims and shoots the arrows as the wheel skims past the bulls-eye. According to enthusiasts, the new sport requires unusual skill and a fine sense of timing.

Cycle racing, once a major sport, is also coming back into its own in amateur circles.

Literally hundreds of races, ranging from short sprints to “century runs” of 100 miles, are scheduled for this summer in all parts of the country. Each year, the Century Road Club of America, with headquarters in St. Louis, Mo., sponsors 100-mile road races and holds an annual cycling meet in its home city. At thirty seconds past midnight each New Year’s, a crowd of California cyclists gets away for a unique 100-mile bicycle race over a course laid out around San Francisco Bay. The event is sponsored by the New Century Wheelmen of San Francisco. In the old days, the “century riders,” who entered the 100-mile grinds held throughout the country, were famous in sport.

ONE of the celebrated road riders of the nineties was “Big Bill” Rischel. His most famous exploit was cycling across the Great Salt Lake Desert, in Utah. That desert ride proved to be more than a stunt. It blazed a trail over the barren wastes which was later followed by highway engineers when they laid out the Utah section of the famous transcontinental Lincoln Highway.

Modern racers have many engineering innovations to aid them. One of the latest is an extra-light bicycle made of aluminum alloy. Completely equipped, this featherweight bike tips the scales at only thirteen pounds. Such machines are expected to play a part in setting new speed records in amateur and professional racing.

Last year, Ernest Ohrt, former racing star, now a representative of the League of American Wheelmen, promoted races in twenty cities, seeking talent for the team which will go to the Olympic Games in Berlin, Germany. He uncovered a number of topnotch riders.

Another outstanding development of the bicycle boom is the establishment of cycle paths in city parks. In the nineties, it was the bicycle rider who led the agitation for better roads. Now, the present-day enthusiast argues, the automobile age can repay its long-standing debt by providing such paths for bicyclists away from the dangers and fumes of the motor traffic which monopolizes our highways.

At Chicago, in response to a monster petition signed by 165,000 bicycle fans, 100 miles of cycle trails are now being established. Detroit, Mich., has established similar “handlebar paths” in several of its parks, as have Washington, D. C, Oklahoma City, Okla., and New York City. As a result of hundreds of requests, Atlantic City, N. J., now permits cyclists, at certain hours of the day, to ride along its famous boardwalk.

To safeguard bicycle tourists riding on main highways, cycling organizations are now strenuously advocating that states authorize the construction of special paths along the shoulders of roads.

With improved machines and better highways, the fun of cycling has increased. Daily, new recruits are joining the 4,000,000 enthusiasts now speeding along on two-wheelers. The bicycle, economical and dependable, has got its second wind.