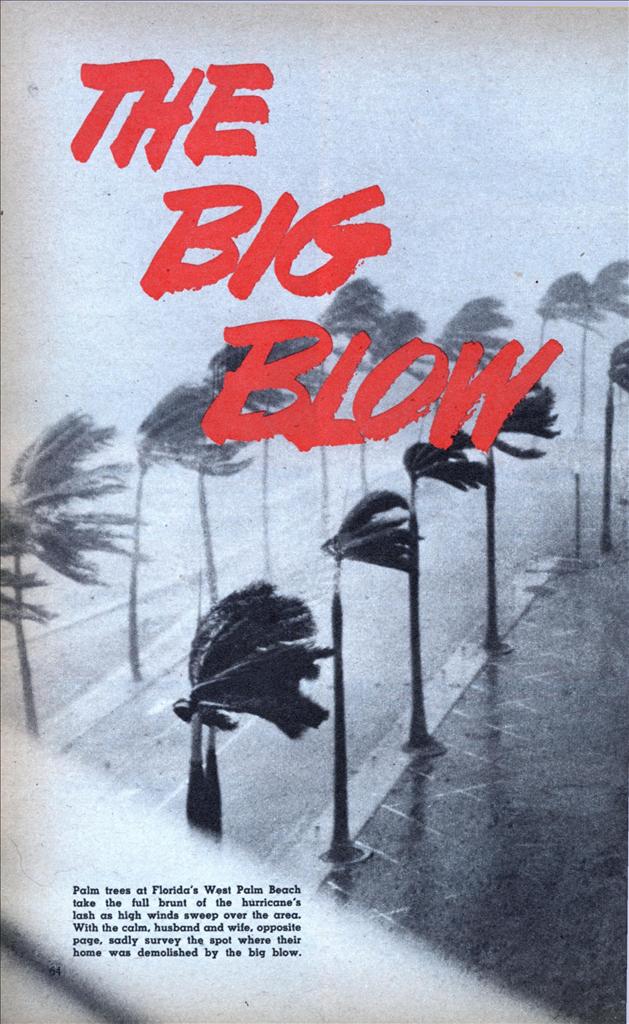 America heads for the storm cellar when the hurricane season arrives with its blustering monsters of wind and fury.

WHEN Miami got one of its hurricane warnings last year, more than half a million people scurried home to batten down the hatches. There was a run on lumberyards—windows had to be boarded. Frantic housewives bought out stores selling batteries to keep radios going in the event electric power failed. Storekeepers went mad trying to keep up with the demand for flashlights, candles, powdered coffee, canned foods and dry ice. But busiest people of all were the anxious guardians of Miami’s newest public library—a streamlined job with rows of book-laden shelves near wide picture windows. The books had to be evacuated.

This was it—hurricane! A 150-mile-an-hour twister, literally pulverizing everything in its way, smashed through the library’s windows, picked up the books and scattered them through the streets.

Later, one of the librarians walked sadly through the building surveying the bookless debris. Wait, there was a book remaining—one solitary book lay wet and soggy on the floor. Its title? Gone With The Wind!

You can never tell what will happen when a hurricane strikes. But you may soon get a chance to find out what one is like because we’re now at the height of the hurricane season. Yes, the big blow picks its own good time to strike terror into the hearts of millions and for the last 64 years, ever since records have been kept of hurricanes, the monsters of wind and fury have chosen autumn months in which to do their greatest damage in the United States.

Every year, without fail, at least one hurricane strikes somewhere in the United States. The two greatest hurricanes of recent times—the devastating New England hurricane of 1938, and the Great Atlantic hurricane of 1944—came right on schedule, before the end of October.

In the fall of 1938, no one living in New England could remember a hurricane. The last one in that area had struck in 1815. But, first word of impending disaster came one fall day shortly after 12 noon—Washington ordered storm warnings up all along the coast.

Two hours later, a vicious 100-mpfi monster ripped through city after city, leaving 550 dead and close to 100,000 families homeless. So powerful was the first impact of the hurricane as it drove the tide before it that the seismograph at Fordham University recorded the sea hitting the New England shore as if it were a major earthquake.

In less than a day, the hurricane ruined four million bushels of apples and filled the Connecticut River with several hundred tons of onions. One city alone had enough glass in the streets to blanket seven football fields. More than 26,000 cars were ground into helpless ruin.

Telephone company engineers spent months repairing the damage which took 10,720 miles of Wire and ground cable. For a while, a person living in Boston had to call London to be able to talk with someone in New York.

All in all, the monster left a bill for a billion dollars in destroyed property—one of the greatest hurricane tolls in history.

By 1944, when the Great Atlantic hurricane blew in, New Englanders were better prepared. Nearly as many people lost their lives, including ten who were electrocuted by hot wires that had fallen into the streets. But property damage was kept down to a mere 100 million dollars.

Although hurricane winds have been known to exceed 200 miles an hour and cause grave losses, actually it is the storm wave which causes the most damage. Grand-daddy of all storm waves was the one that accompanied the hurricane of 1780. A wind of indescribable force swept a huge wave over Barbados Island in the West Indies, leaving more than 50,000 dead.

In 1856 on Last Island, a resort just south of New Orleans known for the most luxurious homes in the Western Hemisphere, 20 Creole families wined, dined and danced like aristocrats of old. On the night of the scheduled annual dance, nearly every family living on the island had gathered in a huge hall. The dance just started when a messenger from the mainland brought warnings of a storm. But the dance-happy people preferred to ignore his tidings. Through the night they cavorted and through the night the winds got wilder and wilder. Waves rolling up on the island’s shores got bigger and bigger.

Then it struck. Thunder blasted the skies, turning clouds into flaming pillows of ghostly blue. With the first gusts of hurricane wind, a huge wave swept across the island. It was all over in a matter of minutes! Only a handful of survivors were picked up, cling- ing to pieces of wreckage. Today, Last Island is a ghost island, with the memory of several hundred people haunting its shores.

Hurricanes are known in almost every part of the world. Carib Indians call it hurakan, God of the Great Wind. Filipinos call it baguio. Australians, with a sense of humor, have tagged it willy-nilly. And if you want to know where we got our word, typhoon, for those Pacific hurricanes, try to pronounce the Chinese word for hurricane—tai-fung.

But no matter where you find the monster, you can be sure he was born somewhere over a tropical ocean. Most hurricanes that strike the United States are born over a stretch of calm ocean called the doldrums, between Cape Verde Island and the West Indies.

The monster always gets his start in life during the summer. Then, he’s just a harmless pancake of warm, moist air, stretched out for miles, like an invisible giant. As autumn approaches, his true personality begins to take shape in the form of a slowly rising column of hot air. As the giant rises, he leaves behind him a. low pressure pocket. He gets narrower from the waist down and broader from the chest up. Like hero-worshipping children, cool molecules of heavier air rush into the low pressure. Soon, they too join the rising column of hot air.

Thousands of feet up, the giant’s head expands under the tugging effect of strong winds, while his body continues to absorb moist air over enough ocean area to cover Missouri. He begins to twist and turn with the rotation of the earth and when he gets up enough speed, he’s on his own.

In his center, called the hurricane’s eye. there is absolute calm. But on the edges, which often extend 200 miles across, he’s a devil on the loose.

No other force in nature can rival the mammoth power of a hurricane. At peak velocity, a tropical twister builds up one trillion pounds of pressure! Right after the Bikini atom bomb test, a U. S. weather expert figured that a man-sized hurricane has the potential energy of 1,000 atom bombs.

They’re dangerous, all right. Yet when hurricanes strike, people do the strangest things. A girl in Louisiana, at the start of a hurricane that destroyed half her town in about 10 minutes, called the local weather office to ask if it was safe to take her dog for a walk. When one Texas twister blew into town, police arrested a man for peddling anti-hurricane sickness pills in the streets.

Last year during the big blow that killed 24 in the New York area, a homeowner de- cided to fix a leaky roof. Just as he started to hammer away, the wind picked up the roof and the homeowner and deposited them both on the doorstep.

After the New England hurricane of 1938, a witty jeweler, whose caved-in windows were looted, posted a sign: “Thanks for cleaning me out. Call again.” Apparently, the looter had a good memory. When the big storm of 1944 hit, the shop was looted again and the jeweler found this sign: “Thank you. I did.”

Residents of the Lesser Antilles, just north of the Venezuelan coastline, waxed bitter recently over not being able to bathe because a hurricane had ruined their water-supply systems. Soon a second hurricane returned and drenched the entire countryside with steaming hot water!

Perhaps weirdest of them all was the hurricane that drained all the water from the northern reaches of Florida’s Indian River. Hundreds of inhabitants scrambled over the muddy bottom on a treasure hunt that netted them stranded fish, auto parts and machinery.

An army pilot, recently caught aloft in a 140-mph wind, had all he could do to keep from losing control of his craft. After landing, he inspected his plane and saw that the wind had neatly sliced more than 150 rivet heads from one wing.

Last year was a big year for hurricanes. Out of a dozen storms, 11 developed into full-scale hurricanes—the largest total ever recorded for one season. Yet, fewer lives were lost and there was less property damage than ever before thanks to the combined efforts of the U. S. Air Force, scientists, and the nation’s weather chiefs.

How do they do it? Well, for the first time in history we have a real defense against the hurricane. Ever since the end of World War II, teams of special Air Force hurricane hunters have been flying into the treacherous hearts of developing hurricanes to bring back vital radar-plotted information. Together with reports from ships at sea and a network of local weather stations equipped with the latest radio signal devices, we now can issue an accurate hurricane warning about 36 hours in advance. And we can trace the route the blow is expected to take.

But, warnings or no Warnings, there are always some doubters. Like the indignant customer who brought back his barometer to a large New York store in the fall of 1938.

“Look,” he complained, “you sold me a defective instrument—it says Hurricane.”

So, they gave him his money back and he started out for his home on Long Island. He arrived there in time to see the house blown out to sea in the worst hurricane the area has ever witnessed!