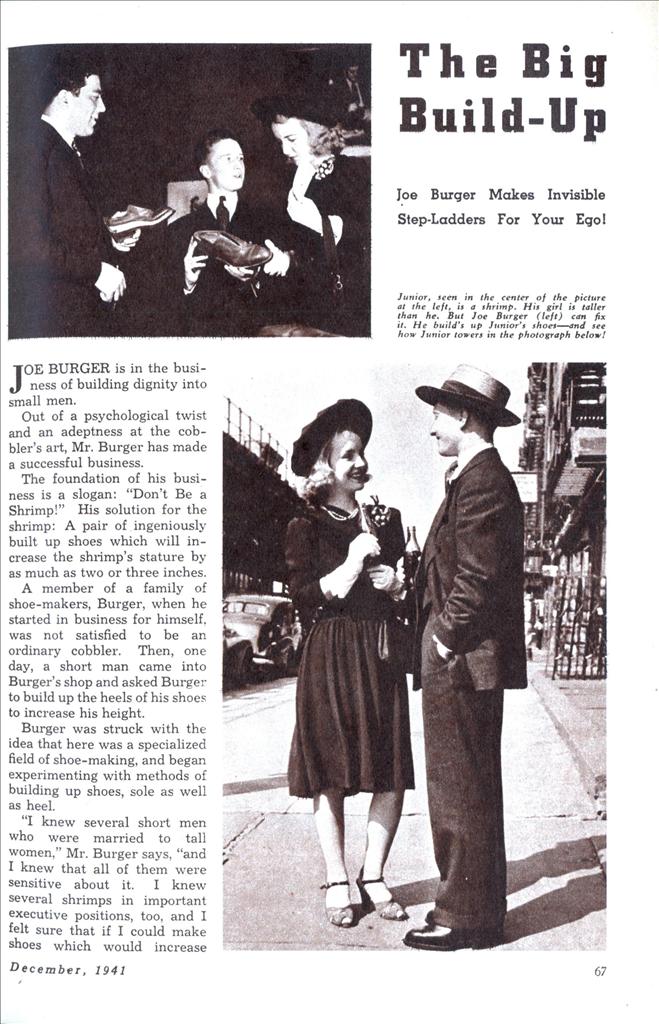 JOE BURGER is in the business of building dignity into small men.

Out of a psychological twist and an adeptness at the cobbler’s art, Mr. Burger has made a successful business.

The foundation of his business is a slogan: “Don’t Be a Shrimp!” His solution for the shrimp: A pair of ingeniously built up shoes which will increase the shrimp’s stature by as much as two or three inches.

A member of a family of shoe-makers, Burger, when he started in business for himself, was not satisfied to be an ordinary cobbler. Then, one day, a short man came into Burger’s shop and asked Burger to build up the heels of his shoes to increase his height.

Burger was struck with the idea that here was a specialized field of shoe-making, and began experimenting with methods of building up shoes, sole as well as heel.

“I knew several short men who were married to tall women,” Mr. Burger says, “and I knew that all of them were sensitive about it. I knew several shrimps in important executive positions, too, and I felt sure that if I could make shoes which would increase their height and still not be noticeable, I could sell them.”

Finally, Burger hit upon a double-barrelled solution to his problem of building up shoes. In the first place, he added cork inner-soles, slanting from the back of the heel to the tip of the toe. As many as 30 of these inner soles can be stacked up and built into the sole of the shoe and still not be noticeable. In the second place, Burger devised and patented an insert-able adjustable arch-support, designed not only as a support but also as a secondary elevator.

The effect of these two methods of building up shoes is the same that is achieved by high heels on women’s shoes— except that Burger’s “high heels” are built inside the shoes.

Most of Burger’s customers still are short men who have tall wives or girl friends, but he also does special work for movie stars, Broadway actors and others.

“I could name a governor, a good many matinee idols and a lot of impressive business executives who rely on my shoes for added dignity,” Burger says.

Burger’s psychological shoe business has grown to the point where he employs ten cobblers steadily.