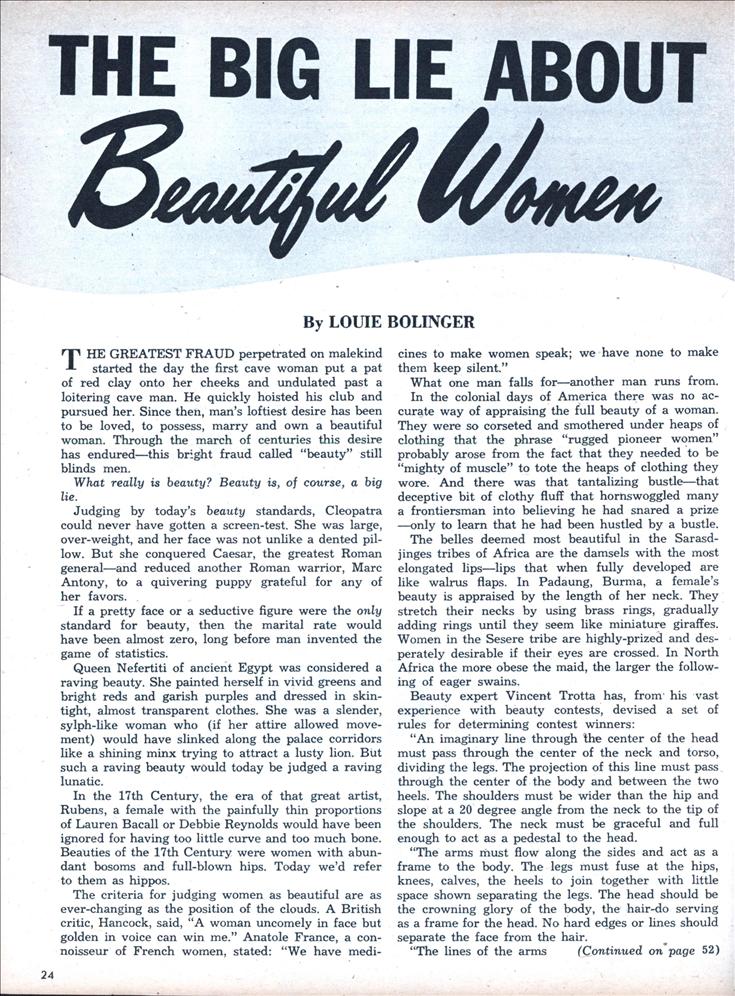 THE BIG LIE ABOUT Beautiful Women

THE GREATEST FRAUD perpetrated on malekind started the day the first cave woman put a pat of red clay onto her cheeks and undulated past a loitering cave man. He quickly hoisted his club and pursued her. Since then, man’s loftiest desire has been to be loved, to possess, marry and own a beautiful woman. Through the march of centuries this desire has endured—this bright fraud called “beauty” still blinds men.

What really is beauty? Beauty is, of course, a big lie.

Judging by today’s beauty standards, Cleopatra could never have gotten a screen-test. She was large, over-weight, and her face was not unlike a dented pillow. But she conquered Caesar, the greatest Roman general—and reduced another Roman warrior, Marc Antony, to a quivering puppy grateful for any of her favors.

If a pretty face or a seductive figure were the only standard for beauty, then the marital rate would have been almost zero, long before man invented the game of statistics.

Queen Nefertiti of ancient Egypt was considered a raving beauty. She painted herself in vivid greens and bright reds and garish purples and dressed in skintight, almost transparent clothes. She was a slender, sylph-like woman who (if her attire allowed movement) would have slinked along the palace corridors like a shining minx trying to attract a lusty lion. But such a raving beauty would today be judged a raving lunatic.

In the 17th Century, the era of that great artist, Rubens, a female with the painfully thin proportions of Lauren Bacall or Debbie Reynolds would have been ignored for having too little curve and too much bone. Beauties of the 17th Century were women with abundant bosoms and full-blown hips. Today we’d refer to them as hippos.

The criteria for judging women as beautiful are as ever-changing as the position of the clouds. A British critic, Hancock, said, “A woman uncomely in face but golden in voice can win me.” Anatole France, a connoisseur of French women, stated: “We have medi- cines to make women speak; we have none to make them keep silent.”

What one man falls for—another man runs from.

In the colonial days of America there was no accurate way of appraising the full beauty of a woman. They were so corseted and smothered under heaps of clothing that the phrase “rugged pioneer women” probably arose from the fact that they needed to be “mighty of muscle” to tote the heaps of clothing they wore. And there was that tantalizing bustle—that deceptive bit of clothy fluff that hornswoggled many a frontiersman into believing he had snared a prize —only to learn that he had been hustled by a bustle.

The belles deemed most beautiful in the Sarasdjinges tribes of Africa are the damsels with the most elongated lips—lips that when fully developed are like walrus flaps. In Padaung, Burma, a female’s beauty is appraised by the length of her neck. They stretch their necks by using brass rings, gradually adding rings until they seem like miniature giraffes. Women in the Sesere tribe are highly-prized and desperately desirable if their eyes are crossed. In North Africa the more obese the maid, the larger the following of eager swains.

“The arms must flow along the sides and act as a frame to the body. The legs must fuse at the hips, knees, calves, the heels to join together with little space shown separating the legs. The head should be the crowning glory of the body, the hair-do serving as a frame for the head. No hard edges or lines should separate the face from the hair.

Is this one in fifty thousand anatomical miracle really the source of a woman’s true beauty? What about the strange and mystifying depths sheltered in her heart and mind and soul? And after all, without a man around, a woman is just a female.

However, H. L. Mencken, an expert on almost all aspects of civilization, including WOMEN, has expressed his opinion about the structure of the female.

“The female body, even at its best, is very defective in form; it has harsh curves and very clumsily distributed masses; compared to it the average milk-jug, or even cuspidor, is a thing of intelligent and gratifying design . . . Below the neck by the bow and below the waist astern there are two masses that simply refuse to fit into a balanced composition. Viewed from the side, a woman presents an exaggerated S bisected by an imperfect straight line, and so she inevitably suggests a drunken dollar-mark.”

In contradiction to this thinking, Rodgers and Hammerstein wrote the eminently popular song, “There Is Nothing Lake a Dame.”

When the experts disagree, how can the average male know what he considers beauty as it is obvious that face and form do not total up to “total” beauty? And therein lies the big lie.

There are no specific factors upon which to hang the label “beauty”— there are only personal combinations which, when brought together, create the illusion of beauty.

The outstanding women of history were not the luscious Marilyn Monroes or the angelic Audrey Hepburns or the flashing-eyed, tempestuous tempered Rita Hay worths. The women who reduced kings to jelly and ruled the rulers of nations were women with vigorous, complex, exciting PERSONALITIES.

Salome was only thirteen years old when she danced and entranced the moguls of the world. Josephine had too many chins and a long pointed nose but her brilliance of mind and grandness of manner snared elusive Napoleon. Queen Elizabeth was bald, wrinkled and dumpy but she captured the love of the handsomest man of the day, Lord Essex. And the greatest woman of them all—the woman whose face could launch a thousand ships and whose kiss could make a man feel immortal—was beyond description and known only as Helen of Troy. Would she have launched only 500 ships if she had been pigeon-toed? Absolutely!

Our jet-age culture has contributed to the big beauty lie. Lands that were once too remote to reach are now within quick flying distance and the simple qualities that might have determined a woman’s beauty have now become a phantasmagoric mixture of racial blends.

Some men prefer the cultivated, aristocratic Frenchwoman; others choose the dark-eyed Italian type; some select the Moroccan belly-dancer while another level of masculine taste favors the fiery Yugoslavian damsel. Many males are interested in the German house-frau while some are stirred by the peppery senorita and others are hypnotized by the veiled harem girl or the lusty Russian woman or the ivory-skinned, blonde haired Scandinavian. There are even those men who take to the American female typified (or deified) by the chic business woman in tailored attire or the doll in tight fitting dungarees.

But number them one after the other or put them all together and they still don’t spell B-E-A-U-T-Y.

Since beauty per se is such an intangible, elusive quality, the only clear way of indicating what beauty might be, is by describing the times when a woman is NOT beautiful.

Example: A woman will not ever be considered beautiful if, while casually chewing gum, she starts popping bubbles—or if, in a moment of loving tenderness she begins cracking her knuckles. A man of taste and breeding will never say, “She is so beautiful” about the, woman who hides her true face behind a make-up mask—or the woman who giggles before being kissed or whose mouth twists and wrinkles or whose voice is shrill when cooing sweet nothings. And no matter how grand or dramatic is a woman’s manner, her flair and poise will vanish if during a luxurious dinner party she begins noisily picking her teeth.

Beauty is only skin deep. Her face may be arranged like a landslide of features and she may be built like a lumpy balloon—but if she can cultivate a vibrant personality and a perfect sense of timing—then she will always be considered a rare beauty.

To be what the man wants her to be exactly when he wants her to be it is the first attribute of a beautiful woman. Too many women are like the gorgeous doll who visited her boy friend in prison and gaped dumbly when he asked, “Did you bring the stuff?” She replied, “Not exactly, honey. I got the saw and the eggs and the flour and lard, but how in hell do you bake a cake?”

Another vital attribute of feminine allure is the capacity to inspire or enthuse a male and avoid conversations like the one overheard at a bar during the cocktail hour.

“Darling, do you adore the glow and texture of my hair, is it like newly spun silk?”

“Are my eyes limpid pools of desire, my lips kissable as rose petals, my nose aristocratic, my ear lobes-drops of delight?”

“Does the scent of me intoxicate you, the touch of me thrill you, the sight of me send shivers through your soul?”

Fashion is another element necessary to the beautiful woman. But while most men enjoy escorting a well-groomed, well-dressed woman, they dislike a woman who is stylish to the point of being ridiculous—as ridiculous as the woman who related her latest dream to her psychiatrist. “I was walking down the street with nothing on but a hat” The psychiatrist asked, “Did you feel embarrassed?” The woman gushed, “Terribly embarrassed, doctor. It was last year’s hat.”

To be considered a beautiful woman, a woman must be sensitive to the man’s longings. Comfort him in his time of despair, be effervescent with enthusiasm as he pursues his ambitions, patient with his temper-tantrums, a laughing-girl when participating in his fun-loving nature— responsive to his intelligence and appreciative to his wisdom and kindly toward his little-boyishness—fashionable and proper when taken to his places of entertainment, indulgent when he is neglectful, overjoyed when he remembers your birthday, conservative when with company but abandoned when alone, tolerant when he is most vain and complimentary even when he developes a paunch; companionable when he is lonely and self-sacrificing when he insists’ upon teaching you how to exercise.

The big TRUTH about beauty is merely this. Regardless of her face or figure a woman can still be beautiful if she realizes that she cannot be beautiful to all men—but can be the most beautiful woman alive to one man. And even today one man is usually enough for any woman.