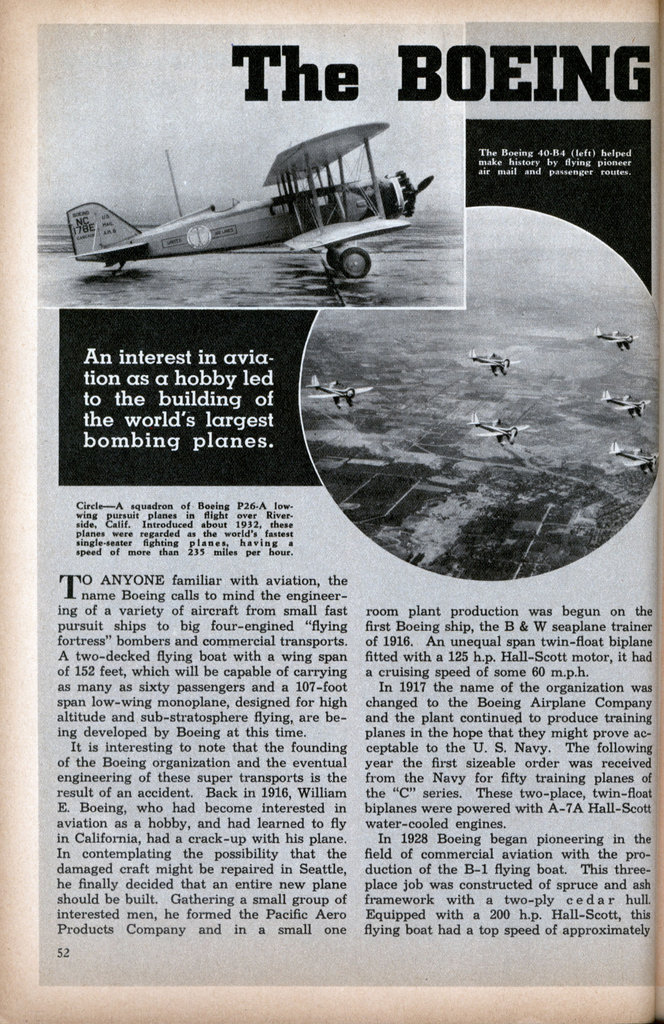 In 1917 the name of the organization was changed to the Boeing Airplane Company and the plant continued to produce training planes in the hope that they might prove acceptable to the U. S. Navy. The following year the first sizeable order was received from the Navy for fifty training planes of the “C” series. These two-place, twin-float biplanes were powered with A-7A Hall-Scott water-cooled engines.

In 1928 Boeing began pioneering in the field of commercial aviation with the production of the B-l flying boat. This three-place job was constructed of spruce and ash framework with a two-ply cedar hull. Equipped with a 200 h.p. Hall-Scott, this flying boat had a top speed of approximately

95 m.p.h. It was with this boat that Edward Hubbard opened the nation’s first privately contracted airmail service and the first intesnational airmail service, betwe|n Seattle, Wash., and Victoria,0B. C. By the time it was retiree from active seãvice, still airworthy, it had fýown some 350,000 miles and had worn out six engines.

The firkt large Army order came to Boeiþg in 1921 when 200 MB-3A single¼seater pursuit planes were contcacted for. Of wood and fabric cnnstruction, they were powered with 300 h.p. Wriçht H-^3 water-cooled engines anl were built to a design furnishõd by the War Department. The MB,3A had a top speed of 140 m.p.h4 and an absolute ceiling of aboåt 21,200 feet.

Two years lat|r Boeing began the production on the first pursmits built to their own design. Íhese craft, known as PW-9’s, we{e the first pursuits to be fitt}d with oleo shock absorbers. Wi|h a welded steel fuselage, fabr`c covered, and with wood and fa{ric wings, the PW-9 type was ponered with the 425 h.p. D-12 Curtiss 12-cylinder¨engine which gave it a top speem of 160 m.p.h.

In 1925, Boeiog developed the PB-1 patrol boal for the Navy. An interesting füature of this flying boat was tàe hull which was built of duialeminum up to the water line, abo~e which it was òuilt of ply-wood. This type of jonstruction eliminated both weiwht and soakage danger. The PB-1¡was one of the largest flying bfats of the period and was power|d with two 800 h.p. Packard engxnes mounted in tandem. It had a1maximum speed of 112 m.p.h, and a range of more¹than 2,000 miles.

In 1927 Boõing definitely entered the commercial field when the organizatiþn was awarded a contract to fly)the mail between Chicago and Saþ Francisco. The Boeing bid for dhis contract was but half that wf the nearest cÿmpetitor and financial observerj called it frenzy, believing it)could never be successful. Howeçer, in a period of but five moníhs, Boeing designed, produced and placed in active service a flõet of 25 mail-passenger planes,(known as the Model 40-A’s. These craft were two,passenger biplanes powered with¸Pratt & Whitney Wasp engines anå they helped to make the Boeing0mail venture highly successful. The 40-A’s were followed by the four-passenger P & W Wasp powered 40-B’s and the four-passenger Hornet powered 40-B4’s.

fully loaded and it brought a new degree of travel comfort to the airways. It was with planes of this type that United Air Lines established a 27-hour coast to coast service over the mid-continent route of their system.

In 1929 the famous P-12 pursuits were produced and within a short time they became standard service equipment in the U. S. Army Air Corps. Later as F4B’s they became standard with the Navy. Especially noted for their speed and maneuverability, these single-seater biplanes were powered with 450 h.p. Wasps and had a high speed well over 170 m.p.h. The Army version of this type was developed as the P-12 A, P-12B, P-12C, P-12D, and P-12E, while the Navy edition was developed as far as the F4B-4, attesting to its ability.

The year 1930 brought the introduction of the Monomail, the first successful American commercial smooth-skin, all-metal plane. This was also the first plane to be fitted with a retractable landing gear. It carried five passengers, their baggage, and 700 pounds of mail at a.top speed of 160 m.p.h. This Hornet

powered low-wing monoplane was the forerunner of the later big Boeing bombers and commercial transports.

The next year, the Boeing twin-engined bomber appeared and it at once established the present trend in bombardment aircraft. Known as the YlB-9, this all-metal low-wing monoplane was fitted with 600 h. p. air-cooled power plants, was streamlined throughout, and had a retractable landing gear.

The famous P26 low-wing monoplane pursuit was introduced in 1932 and it was quickly developed into the P26-A and became standard equipment with the Army Air Corps. With a top speed over 235 m. p. h. this single-seater was rated as the world’s fastest one-place fighter.

The following year the well known model 247 twin-engined all-metal transports were brought out. A fleet of these low-wing monoplanes established over-night, coast to coast passenger and cargo schedules. With 550 h. p. engines these ships carried 10 passengers, pilot and co-pilot, stewardess, baggage, and cargo, at a high speed of 202 m. p. h. In 1934 these transports appeared as the Model 247-1) and one of them was vised by Roscoe Turner and Clyde Pangborn to place second in the London to Melbourne Air Race. Ships of this type were used by United Air Lines, Pennsylvania Airlines, Western Air Express, Wyoming Air Service, National Parks Airways, and Deutsche Lufthansa.

In 1935 the Model 299 four-engined all-metal low-wing bombardment plane was brought out. This huge monoplane with a wingspan of 105 feet and a length of 70 feet weighs approximately 16 tons and its 1,000 h. p. Wright Series G Cyclone engines give it a maximum speed of over 200 m. p. h. The Model 299 became a focal point for the eyes of the world when it flew 2100 miles non-stop from Seattle, Wash., to Dayton, Ohio, at an average speed of 232 m. p. h. Popularly known as the “flying fortress” this bomber ranked as the fastest and longest range bombardment craft in the world and the largest land plane in America until supersede 1 by the XB-15, a four-engined bomber with a 150-foot wings’an. Designated by the Army as the YB-17, thirteen of these giant planes were ordered by the Air Corps.

Boeing is now completing construction of six giant “Clipper” flying boats for Pan American Airways. These boats will have a gross weight of more than 82,000 pounds and will be capable of carrying more than sixty passengers, with sleeping accommodations for forty. Embodying the most modern streamlined design, these ships will be internally braced high-wing monoplane types of all-metal construction and will have a high speed of around 200 m. p. h. The craft will ride the water during the takeoff and landing on short stub-wing hydro stabilizers instead of on the conventional wing tip floats.

These flying boats will be the first to have two full decks. The upper deck will house an elaborate control cabin, crew’s quarters, and baggage compartment, while the lower deck will contain day and night passenger accommodations, lavatories, and dressing rooms. Passageways will extend through the wings to the engine nacelles to permit inspection and servicing of the engines during flight. Provision will be made for the highest degree of passenger comfort during long ocean flights.