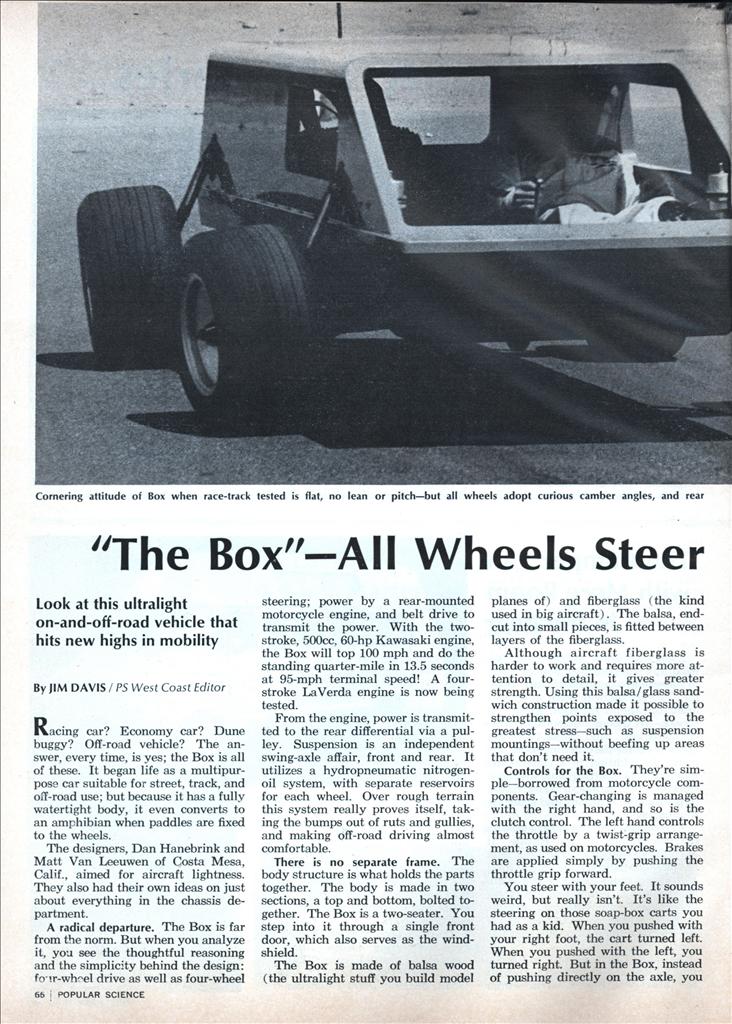 “The Box” – All Wheels Steer and Drive

Racing car? Economy car? Dune buggy? Off-road vehicle? The answer, every time, is yes; the Box is all of these. It began life as a multipurpose car suitable for street, track, and off-road use; but because it has a fully watertight body, it even converts to an amphibian when paddles are fixed to the wheels.

The designers, Dan Hanebrink and Matt Van Leeuwen of Costa Mesa, Calif., aimed for aircraft lightness. They also had their own ideas on just about everything in the chassis department.

A radical departure. The Box is far from the norm. But when you analyze it, you see the thoughtful reasoning and the simplicity behind the design: four-wheel-drive as well as four-wheel steering; power by a rear-mounted motorcycle engine, and belt drive to transmit the power. With the two-stroke, 500cc, 60-hp Kawasaki engine, the Box will top 100 mph and do the standing quarter-mile in 13.5 seconds at 95-mph terminal speed! A four-stroke LaVerda engine is now being tested.

From the engine, power is transmitted to the rear differential via a pulley. Suspension is an independent swing-axle affair, front and rear. It utilizes a hydropneumatic nitrogen-oil system, with separate reservoirs for each wheel. Over rough terrain this system really proves itself, taking the bumps out of ruts and gullies, and making off-road driving almost comfortable.

There is no separate frame. The body structure is what holds the parts together. The body is made in two sections, a top and bottom, bolted together. The Box is a two-seater. You step into it through a single front door, which also serves as the windshield.

The Box is made of balsa wood (the ultralight stuff you build model planes of) and fiberglass (the kind used in big aircraft). The balsa, end-cut into small pieces, is fitted between layers of the fiberglass.

Although aircraft fiberglass is harder to work and requires more attention to detail, it gives greater strength. Using this balsa/glass sandwich construction made it possible to strengthen points exposed to the greatest stressâ€”such as suspension mountingsâ€”without beefing up areas that don’t need it.

Controls for the Box. They’re simpleâ€”borrowed from motorcycle components. Gear-changing is managed with the right hand, and so is the clutch control. The left hand controls the throttle by a twist-grip arrangement, as used on motorcycles. Brakes are applied simply by pushing the throttle grip forward.

You steer with your feet. It sounds weird, but really isn’t. It’s like the steering on those soap-box carts you had as a kid. When you pushed with your right foot, the cart turned left. When you pushed with the left, you turned right. But in the Box, instead of pushing directly on the axle, you are operating a hydraulic four-wheel steering system. The surprising thing to the designers was that it proved easier to make than a conventional two-wheel mechanical steering gear and linkage.

When can you buy? Plans call for about half a dozen of the Boxes to be built by the end of the year. A team of them will be entered in the Mexican 1000 off-road race this winter. They’ll still be experimental. After that, start watching for yours.