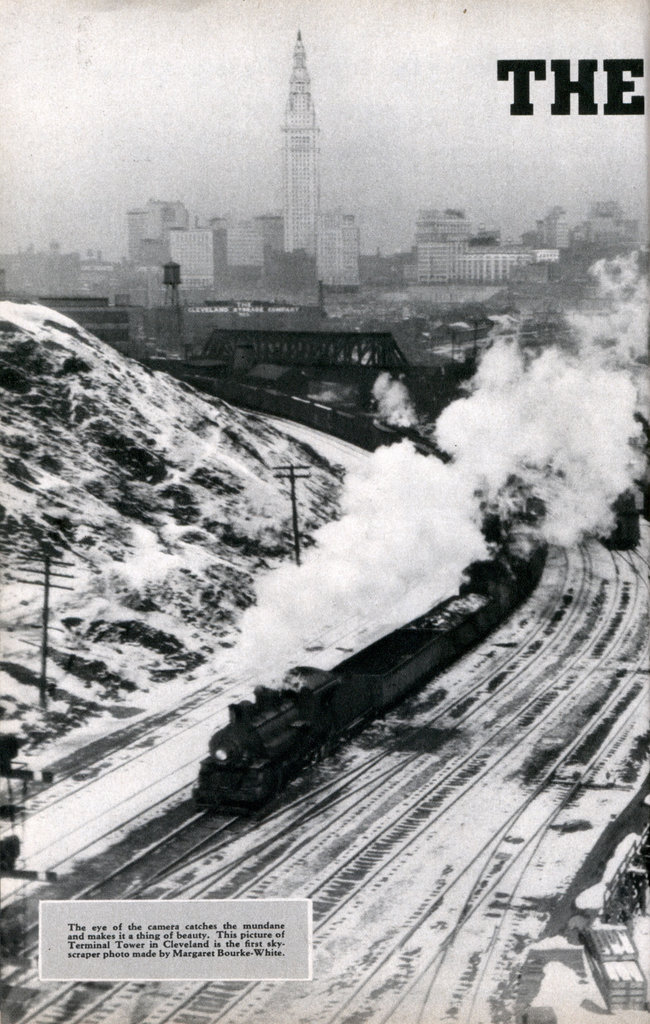 Margaret Bourke-White, who saw beauty in the lines of a steel girder and the blackness of a coal mine, pioneers a new era of photography.

WHEN I called on Margaret Bourke-White in her spacious penthouse studio in a Fifth Avenue office building, she had just returned to New York from photographing a new textile mill in the South. Piled high in the center of the vast room was the equipment she had carried with her: A couple of cameras, a box of flashlight bulbs, a folded tripod and three or four travel-scarred suitcases.

To me, they represented Exhibit A in the fast-accumulating evidence to prove that this dark-eyed, intense young woman is one of the world’s greatest photographers. I saw in them the spirit of adventure and pioneering which is the secret of her success, the same spirit which led her to go to New York ten years ago and embark on the development of an idea which was peculiarly her own.

Briefly, that idea was that there is beauty in industryâ€”a beauty that lies in the clean-cut lines of a steel girder, the towering majesty of a city skyscraper, the shower of sparks from a blazing coke oven, the sombre blackness of a coal mine. She knew that the faces of factory workers could wear the nobility of statesmen, that farmers could plow their fields with the grace of athletes and that the skill in a workman’s toss of a red-hot rivet could be compared with the marksmanship of a rifleman.

It remained only for her to capture these impressions photographically. She did, and the result is that she is now known primarily as an industrial photographer, as the woman who found real art in the mechanistic age and translated it into hundreds upon hundreds of vivid photographs known the world over for their imagination and beauty of design.

She was 22 when she first went to New York City. She had just been graduated from Cornell University in upstate New York, where she had earned part of her tuition by taking pictures of the campus. Her family at that time was living in Cleveland, and for a few months after college she took commissions for architectural and garden photographs in that city. But it was not until a friend one day allowed her to use her camera on his steel mill that she really discovered her forte. She took hundreds of negatives and kept twelve.

“I realized then,” she told me, “that I had found out what I wanted to do. I inherited from my father an appreciation of the beauty in stone and steelâ€”in industry itselfâ€”all of the things that bring one closer to life. Industrial photography seemed to be the answer to all of this.”

She arrived in New York in 1927 with her cameras, a collection of photographs and letters of introduction to a group of well-known architects. One of them was so impressed by her “samples” that he took some of her pictures and told his friends about them. Later a banker wanted her to do some interiors of his place of business, still later she was asked “to do work for a few large corporationsâ€”the Aluminum Company of America, the Standard Oil of Ohio, the Chrysler Corporation.

In 1929, she was asked to join the staff of Fortune Magazineâ€”a step up which afforded her a chance to take some of the pictures which have since made that magazine famous. Among these were the ones she made of the drought in 1934.

“I chartered a plane and went to Omaha,” she recalled, “and then made my way to Texas and the Dakotas. The heat was intense and I used to get up at 4 a. m. and work for six or seven hours at a time. I had to work quickly, too, for the pictures had to be published before the drought was over.”

I asked her what types of cameras she prefers.

“Well,” she said, “I used to like a big camera but lately I’ve had excellent results with a candid camera. Improvement in fine-grain developers has made it possible to get very good results with a small camera. And they are easier to handle. And, of course, I have a large and varied assortment of lenses.”

During this period, Miss Bourke-White made three trips to Russia to record photographically the five-year plan. She made the first motion pictures ever filmed there by a non-Russian with the full permission of the Soviet authorities.

She declared the Russians made excellent photographic subjects because of their inherent sense of drama.

“Unlike the average American,” she said, “the Russian dramatizes himself to the point where he is almost perfect in a pictorial sense. You don’t have to ask him to pose for youâ€”he seems to sense what you are looking for in a picture.”

While we were discussing posing, she told me that some times she has to wait for hours to get the right effect in a photograph while on other occasions she has snapped the subject instantly.

“I know that some believe I get my results because I can take so much time,” she confessed. “Well, of course, that’s true to a certain extent. It does help to be able to get the scene to your liking. But often the best results are obtained when you work fast and catch the subject on the split second. Woman make especially good portrait photographers because men won’t rush out on a woman.

Perhaps the underlying theme of Miss Bourke-White’s work is its sincerity. This is largely the result of the study she makes of each new job, the groundwork she lays before she is ready to focus her cameras. Last summer she spent several months in Brazil making photographs of coffee plantations for the American Can Company.

“I practically lived with the workers,” she said, “and observed every step in the making of coffee.”

Miss Bourke -White, who dons men’s trousers and gay-colored men’s shirts for many of her jobs, laughed when I asked her whether she ever took any chances with her life to get some of her photographs.

“Chances?” she repeated. “Not since the companies that insure me began to bother me every time they heard I was doing something they were afraid might make me a bad risk. I’m always very careful what I do and where I go. Of course, I have perched on a steel girder to get a photograph of a skyscraper and I’ve hung out of windows for other shots, but it never bothered me at all. I just don’t get dizzy, and besides I’m too careful!”

Once, when she was photographing the America’s Cup races at Newport, she slipped from the deck of a speedboat and landedâ€”camera and allâ€”in the cold waters of Narragansett Bay. And on another occasion, a few weeks, before my interview, she was nearly shot by an army sentry when she went to Bedloe’s Island to get some night pictures of the Statue of Liberty.

One of her prize possessions is a photograph she made of President Roosevelt at his desk in the White House and which he autographed for her.

“I had no difficulty at all getting the President’s permission for the picture,” she recalled, “but it was another matter in the case of Mrs. Roosevelt. I never got to see her at allâ€”her secretary saw to that very efficiently.”

She is called on to do a large amount of portrait work and has taken the pictures of most of the leading industrialists of the country. While in Russia she photographed Stalin’s mother and great aunt. She also has done Dr. Hans Luther, Senator Borah, Secretary of State Hull, Secretary of Labor Perkins, Katharine Cornell, O. O. Mclntyre, Damon Runyan and a host of others. One of her most important jobs was the photo-mural in the 160-foot rotunda of the R. C. A. Building in Rockefeller Center. Measuring ten and one-half feet in height, it is one of the largest photo-murals extant, and the only one ever done by a woman.

Last fall she toured the Northwest, snapping pictures for Life, for which she now works. She mingled with roustabouts on the world’s biggest earthen dam at Fort Peck, Montana. Expecting to snap purely construction pictures, Miss Bourke-White discovered that the workers and their families had refused to live in the meticulous quarters provided by Army engineers, and had established six towns of their own which resembled those of the frontier days of ’49.

Despite her almost twenty-four-hour schedule of work she finds occasional time to indulge in her three hobbies: swimming, skiing and dancing. She confessed she would rather “dance the tango than eat” and revealed she had an arrangement with a New York dancing school whereby she does occasional photographs for it in exchange for the chance to dance and learn the latest steps.