Aeromarine sounds like a color and that’s a pretty weak name for something that looks like it should be flown by G.I. Joe. I suppose this is reasonable considering that the inventor’s name is Skeets, but I think we can do better.

Maybe something more muscular, like “Car-BO-Plane” (over-hyphenation and making one word ALL CAPS was very popular in these mags). Or maybe something personal like “The Skeeter” or “Skeetsmobile”.

What do you think? 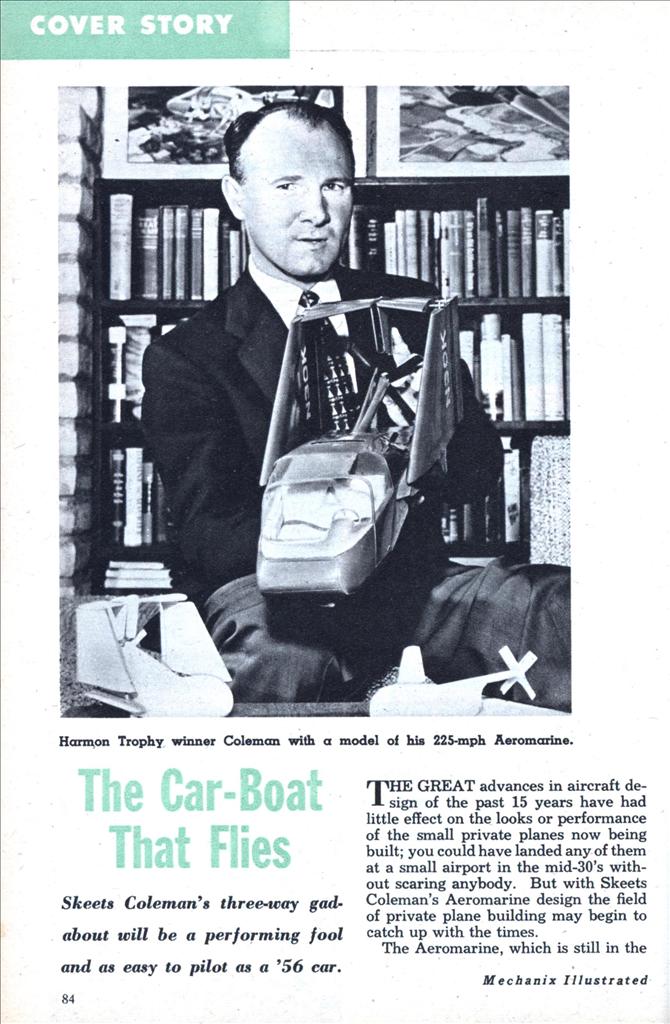 Skeets Coleman’s three-way gadabout will be a performing fool and as easy to pilot as a ’56 car.

THE GREAT advances in aircraft design of the past 15 years have had little effect on the looks or performance of the small private planes now being built; you could have landed any of them at a small airport in the mid-30’s without scaring anybody. But with Skeets Coleman’s Aeromarine design the field of private plane building may begin to catch up with the times.

The Aeromarine, which is still in the workshop stages, will be a high performance plane that can be operated from land or water or driven like an automobile—making it ideal for the all-around week-end sportsman.

Compared to the many hybrids of this type that have preceded it, the Aero-marine has a convincing, unified look that you would expect from a man of Coleman’s background and that takes it clean out of the Rube Goldberg class. Its modified delta wing structure in particular reflects Coleman’s recent experience as test pilot on the Navy XFY-1 Convair Pogo, the vertical takeoff fighter. For his achievement in making the first-ever flights in this radical type of plane Coleman won the 1955 Harmon Trophy.

In his design Coleman has concentrated on creating a go-anywhere airplane—which meant cutting down on its performance as a car or boat. As a car it will be a power tricycle with a top speed of 50 mph. Power for humming down the highway will be fed to the rear wheels of the landing gear; steering will be through the single front wheel. As a boat—well, it’ll float fine. If you want to go up the lake for more bait, why not let down the hydro-ski under the hull and make a short hop of it?

But as a plane the Aeromarine is expected to show considerable class. It will have a range of 800 miles on 80 gallons of gas, a top speed of 225 mph. Cruising speed, with five aboard, will be 200 mph. It will take off with a run of 800 feet, land at 57 mph. Simple controls and instruments, plus the stability and no-stall characteristics of the delta wing, will make flying easy for anyone.

One device designed just for the amateur pilot is a miniature delta wing mounted on a fulcrum on the nose of the Aeromarine. This “radiator ornament” will tell the pilot at a glance if his plane is in a safe altitude in relation to airspeed and wind—the most important thing to know when flying a delta wing.

An extremely advanced feature for high lift on takeoff and landing will be a system for sucking boundary air off the leading edge of the wing. This will be an aid rather than a necessity; if the system conks out it will still be quite simple to land or take off safely. •