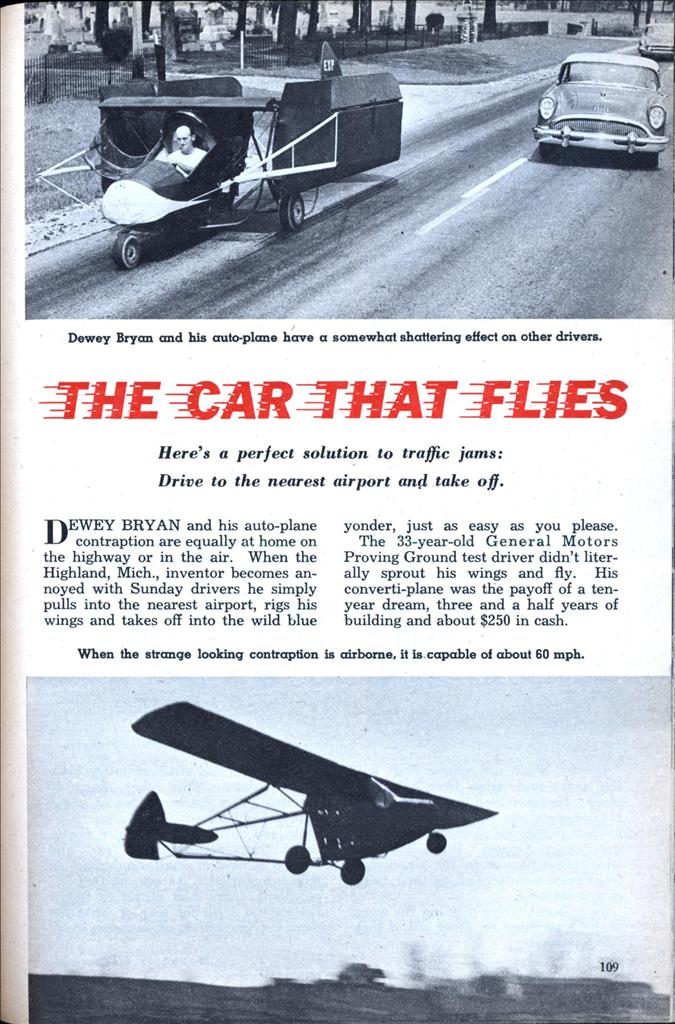 THE CAR THAT FLIES

Here’s a perfect solution to traffic jams: Drive to the nearest airport and take off.

DEWEY BRYAN and his auto-plane contraption are equally at home on the highway or in the air. When the Highland, Mich., inventor becomes annoyed with Sunday drivers he simply pulls into the nearest airport, rigs his wings and takes off into the wild blue yonder, just as easy as you please.

The 33-year-old General Motors Proving Ground test driver didn’t literally sprout his wings and fly. His converti-plane was the payoff of a ten-year dream, three and a half years of building and about $250 in cash.

Dewey began his unique craft with the motor and wings from a crashed plane. He assembled the mechanism in his basement and was laughed at when he putt-putted his flying machine into the Pontiac Airport. But a half hour later, when he was in the air, airport employees were scratching their heads in wonderment.

To go from driving to flying, the wings of the craft must be lifted out of their side brackets and attached to the body of the plane. This takes about 30 minutes. The machine flies at about 60 mph and lands at 25 to 30.

On the road, the wings are neatly tucked back alongside the “car” and have a somewhat shattering effect on fellow motorists. As one of Dewey’s neighbors says, “I’m afraid to follow Dewey too close for fear of what the other drivers will do after seeing him.”

State officials were puzzled at first as to how they should classify the contraption. Was it a car or a plane? Finally Dewey got auto plates for highway travel and another license for flying operations.

In flight the Bryan plane has the look of an early Wright or Bleriot flying machine because of its uncovered fuselage. Like the first Wright plane it is a pusher —has its prop aft of the wings.

Roadable airplanes have been designed and flown before but Dewey believes his single seater is the first to carry its wings down the highway. Others must leave them at the airport or haul them in a trailer, which is cheating slightly, Dewey feels.

“What I’m trying to build,” Dewey says, “is a plane that will make flying practical and economical for everyone.” •