Popular Mechanics
Issue: Mar, 1924
Posted in: General
Tags: how its made
No Comments on The Chewing Gum Industry (Mar, 1924) 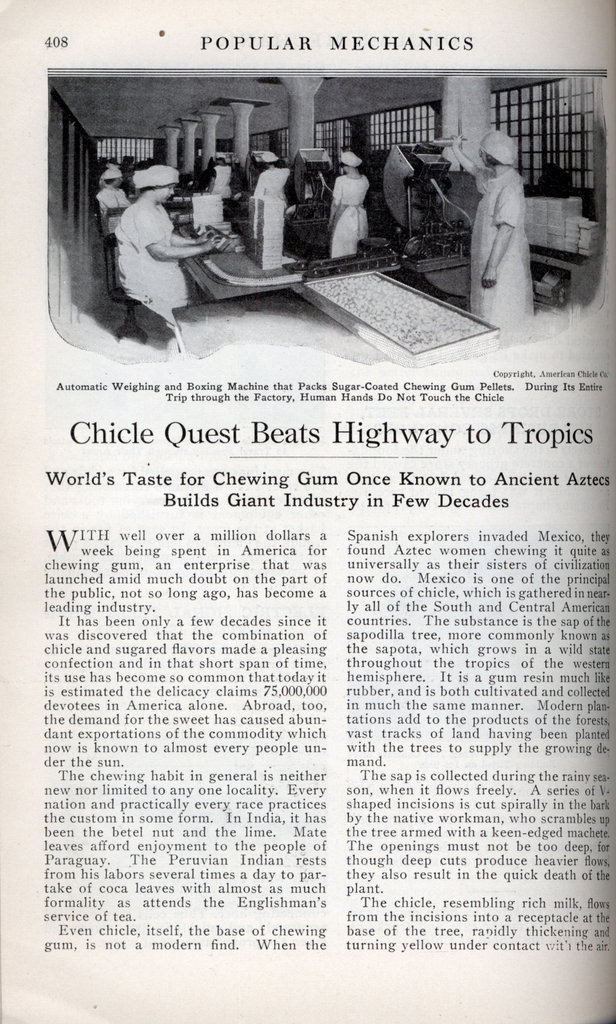 WITH well over a million dollars a week being spent in America for chewing gum, an enterprise that was launched amid much doubt on the part of the public, not so long ago, has become a leading industry.

It has been only a few decades since it was discovered that the combination of chicle and sugared flavors made a pleasing confection and in that short span of time, its use has become so common that today it is estimated the delicacy claims 75,000,000 devotees in America alone. Abroad, too, the demand for the sweet has caused abundant exportations of the commodity which now is known to almost every people under the sun.

The chewing habit in general is neither new nor limited to any one locality. Every nation and practically every race practices the custom in some form. In India, it has been the betel nut and the lime. Mate leaves afford enjoyment to the people of Paraguay. The Peruvian Indian rests from his labors several times a day to partake of coca leaves with almost as much formality as attends the Englishman’s service of tea.

Even chicle, itself, the base of chewing gum, is not a modern find. When the Spanish explorers invaded Mexico, they found Aztec women chewing it quite a universally as their sisters of civilization now do. Mexico is one of the principal sources of chicle, which is gathered in nearly all of the South and Central American countries. The substance is the sap of the sapodilla tree, more commonly known as the sapota, which grows in a wild state throughout the tropics of the western hemisphere. It is a gum resin much like rubber, and is both cultivated and collected in much the same manner. Modern plantations add to the products of the forests, vast tracks of land having been planted with the trees to supply the growing demand.

The sap is collected during the rainy season, when it flows freely. A series of V-shaped incisions is cut spirally in the bark by the native workman, who scrambles up the tree armed with a keen-edged machete. The openings must not be too deep, for though deep cuts produce heavier flows, they also result in the quick death of the plant.

The chicle, resembling rich milk, flows from the incisions into a receptacle at the base of the tree, rapidly thickening and turning yellow under contact with the air.

Native women gather it daily and carry it to camp where it is boiled in great kettles or crude vats to rid it of moisture. This cooking process causes the fluid to take on a grayish shade. The chicle is then made up into irregular loaves and is ready for shipment.

This production, at the source, though performed chiefly by cheap and unskilled labor, calls a vast army of workmen and huge sums of capital into service. From Mexico alone approximately $2,000,000 worth of the raw material is exported each year.

The chicle loaf, when it arrives at the American market, weighs about 25 pounds. At its destination, the factory, it is put through various processes of boiling and purification and emerges a silvery gray color. Paraffin wax is occasionally used at this stage as an adulterant, but such methods are not generally practiced. Machinery kneads the cleaned gum with sugar and essential oils that flavor it, rolls it into sheets, cuts it into bars, and wraps them in paper which protects the product until it reaches the hands of the consumer.

Americans are said to spend twice as much for the confection as for pianos and other musical instruments, and England, where the delicacy has only recently been introduced to popular favor, parts with a sum reported to equal $1,000,000 a year for chewing gum. France’s people spend annually about $383,000 for it.

Gum-chewing in the countries of the Allies was given great impetus during the war. British troops who had learned of the refreshing qualities of gum at sports, quickly took to it in the trenches, and even as an actual boon when water was scarce.

In France the delightful substance fir acquired real popularity when the American troops began to pour into that country. The children were the first or, among the residents of the barrack communities to become acquainted with the sweet. “Chewing gomme, s’il vous plait. â€””Chewing gum, please,”â€”became a familiar request from them to the soldier from the New World. The child invariably gave morsels of the tidbit to grownups and the fashion began to spread, even among the peasants.

However, virtually every people who comes in contact with the western trade men has to some degree been won to the chewing-gum fad. Recent export figures reveal that the confection is being shipped from the United States to no less than 75 countries and colonies scattered the world over. While the supply sent to Central European states is somewhat smaller than those going elsewhere, the balance is made up by importations of Asiatic nations and Australia on the other side of the globe. Trial exports to the oriental continents amounted to a half million dollars in a single year, and included large shipments to the Philippines, Japan, and India.