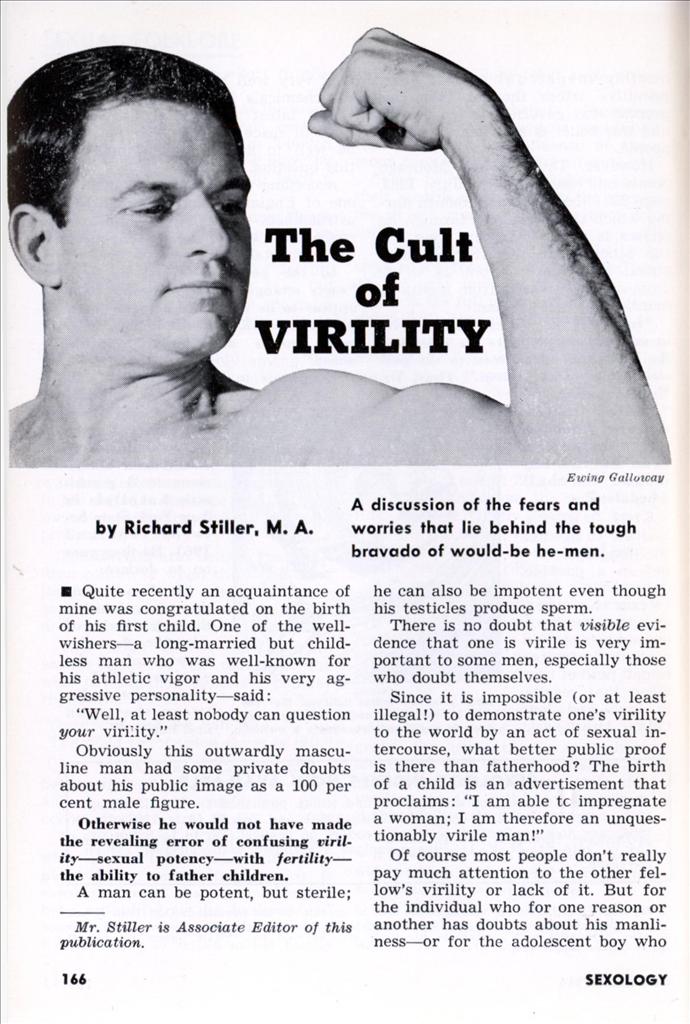 The Cult of VIRILITY

A discussion of the fears and worries that lie behind the tough bravado of would-be he-men.

by Richard Stiller, M. A.

Quite recently an acquaintance of mine was congratulated on the birth of his first child. One of the well-wishers—a long-married but childless man who was well-known for his athletic vigor and his very aggressive personality—said: “Well, at least nobody can question your virility.”

Obviously this outwardly masculine man had some private doubts about his public image as a 100 per cent male figure.

Otherwise he would not have made the revealing error of confusing virility—sexual potency—with fertility— the ability to father children.

A man can be potent, but sterile; he can also be impotent even though his testicles produce sperm.

There is no doubt that visible evidence that one is virile is very important to some men, especially those who doubt themselves.

Since it is impossible (or at least illegal!) to demonstrate one’s virility to the world by an act of sexual intercourse, what better public proof is there than fatherhood? The birth of a child is an advertisement that proclaims: “I am able to impregnate a woman; I am therefore an unquestionably virile man!”

Of course most people don’t really pay much attention to the other fellow’s virility or lack of it. But for the individual who for one reason or another has doubts about his manliness—or for the adolescent boy who has yet to prove it—such demonstrations of sexual prowess are very important.

For some they are an emotional and psychological necessity. So much so that all sorts of symbols have, in recent times, become important psychological crutches for insecure males.

Take the tattoo, time-honored symbol of the rough-and-tough male, and traditionally associated with such relentlesly masculine types as seamen, construction workers, lumberjacks, etc. Whatever its origins among primitive men, the tattoo in cultures like ours has become a sort of status symbol of virility.

One famous cigarette advertisement became well – known for the prominently-displayed tattoo on the hand of its well-dressed and otherwise socially impeccable male model. The implication, of course, was that smoking that particular brand of cigarettes was a further sign of manliness.

Ironically, 3 investigators—a psychologist and 2 psychiatrists—have since found that the tattooed man is more often likely to have sexual problems than is the non-tattooed man.

In a study of 65 tattooed patients at the veterans’ hospital in Oklahoma City, they found that while most of these men had had themselves tattooed in order to impress their girl friends, they actually scored poorly on a personality test that rated masculine attributes.

The doctors concluded from this and from personal and medical histories that the tattooed man is really more likely to “aspire to be masculine” rather than to be the sturdy male figure one might expect.

As the nationally-syndicated columnist Andrew Tully remarked in a blast at the advertising practice of equating smoking with virility: “It is too bad that the tattoo has become a symbol of a special kind of manhood for insecure males seeking to assure themselves of the right to wear long pants.”

The “right to wear long pants” is pretty much established for most men over—let us say—age 21. But what about the male teen-ager who is painfully aware of the need to win this right?

Here, certainly, is an anxious and unsure individual who “aspires to be masculine.” How does he gain acceptance of his fledgling manhood ? More to the point, how does he demonstrate to himself, as well as to others, his adult status?

The achievement of sexual intercourse—the proof of his virility—is ironclad nailed-down evidence that he is a man. Adolescents know that older men do not consider boys men until they have hat”, sexual intercourse.

Some boys, says Dr. Lester A. Kirkendall of Oregon State University, try to demonstrate their hard-won virility by a visit to a prostitute, preferably in the company of other boys. The presence of others gives them the necessary courage for the ordeal of this self-imposed initiation ceremony.

It also provides the essential witnesses to the triumph. This is also the case when boys engage in collective sexual activity with non-prostitute girl friends, or when gangs of delinquent youth commit mass rape on some luckless girl.

But what of the boy who—through sensitivity, fear of his own inadequacy, or any of a number of other reasons—is unable or unwilling to participate in semi-public sexual activity? How does he demonstrate— and he desperately needs this demonstration—his manhood ?

This is no light problem. One of the serious side-effects of our complicated big-city culture is its postponement of adulthood.

The gap between a boy’s sexual and physical maturity—at age 14 or 15—and his social and economic maturity—that is, the age when he can afford to marry and start a family— is a dangerous psychological no-man’s-land. He feels himself at this time an untested man treated like a boy, and not permitted to win his spurs.

Since society does not provide it for him, some authorities suggest, he creates for himself an initiation ceremony by which he tells himself and others that he has arrived. Part of this initiation is the use of symbols to demonstrate his virility and his manhood. In the United States today, one of the most powerful of these symbols is the automobile.

That is why—say some experts— teen-agers drive so hard and so fast, and seem generally to be so car-crazy. When a 15 or 16-year-old gets the keys to a car—preferably his own, but his father’s will do—it is like proclaiming to all the world: “I am a man!” He feels much like the first-time father on the birth of his firstborn.

Other well-known aspects of the teen-agers’ efforts to be manly are quite well-known. They include the copying of what are taken to be adult male ways, such as smoking, drinking, using profanity, etc.

But nothing makes a boy feel as much like a man as achieving sexual intercourse. This is one reason, say some sociologists, for the drive towards early marriage. If one act of coitus is the mark of a man, how much more so is the regular sexual intercourse that the marriage relationship symbolizes!

Sometimes this preoccupation with the signs and symbols of maleness can become a cult of virility. In some Latin-American countries, particularly Mexico, this cult has become a full-blown cultural pattern that is almost a national characteristic.

Known in Spanish as machismo, this cult of masculinity exaggerates the attributes of maleness. To be a “real” male—macho—one must demonstrate to an extreme the manly traits of physical courage, aggressiveness, sexual virility, and personal domination over others, especially over women.

This puts quite a burden on the growing adolescent, just as our own cultural requirements for virility— that a man marry, have children, and support them in a relatively high standard of living—can and do create serious tensions for the young male.

As the sociologist Oscar Lewis has said, “In any country where machismo is considered very important, fear of impotence or at least complex sexual problems must occur.”

To sum up: the cult of virility protests too much. It uses symbols to hide a frightening lack. Tattooing, fast – driving and tough – talking are more often than not a self-confession of male inadequacy.

—A Radcliffe senior, quoted in Newsweek.