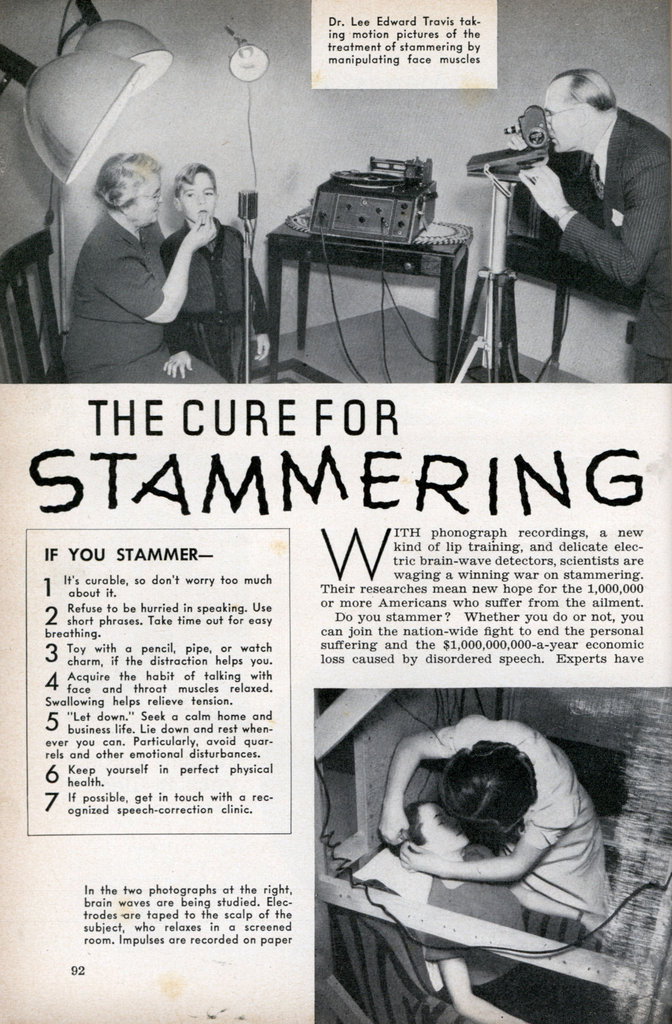 THE CURE FOR STAMMERING

WITH phonograph recordings, a new kind of lip training, and delicate electric brain-wave detectors, scientists are waging a winning war on stammering. Their researches mean new hope for the 1,000,000 or more Americans who suffer from the ailment. Do you stammer? Whether you do or not, you can join the nation-wide fight to end the personal suffering and the $1,000,000,000-a-year economic loss caused by disordered speech. Experts have now discovered such simple methods of treatment that nearly anyone can cure himself, or show a friend how to do it.

These findings spring from the latest work in speech-correction clinics throughout the country, where every modern scientific weapon helps treat even the most refractory cases of stammering. Enter one of the most advanced of these institutions, headed by Dr. Lee Edward Travis at the University of Southern California, and you will see how research and actual treatment go hand in hand.

First, the subject speaks into a microphone, while a phonograph disk makes a permanent record of his voice. This serves a double purpose. Played back subsequently, it encourages him by showing him the progress he has made under treatment. With hundreds of other records, it also enables research workers to compare different types of stammering. Cases range from persons who barely stammer to others whose stammering* spasms last as long as half an hour.

Brain waves, the faint electrical impulses that reveal a person’s nervous make-up, are being studied as a possible help in diagnosing cases of stammering. In recording them, a subject lies relaxed within a room inclosed by copper screens to shield the ultrasensitive electrical instruments from outside influences. As many as ten electrodes, with wires leading to recording apparatus, are attached to his scalp. Then an amplifier magnifies the brain currents, so that they may be recorded in a wavy line on an endless tape. A normal person gives a pattern resembling a fairly regular row of saw teeth. In the extreme case of a brain tumor, the line wavers aimlessly all over the chart. Experimenters hope to find intermediate sorts of brain waves, characteristic of various classes of stammerers, and thus link impaired speech with other types of nervous disorders. Manipulating facial muscles, a new treatment developed by Mrs. Edna Hill Young and elaborated upon by Dr. Travis, helps overcome severe stammering. Even backward children unable to utter a word have been taught to speak. With deft fingers, the “trainer” shapes the subject’s lips so that nothing but the correct sound can possibly come out. Thus a patient, who previously could be trained only by visual and hearing aids, now experiences the exact “feel” of pronouncing a syllable. So successful has the method proved that the Rockefeller Foundation has financed large-scale training of operators for clinics.

Stammering usually begins in childhood and parents should be on the watch for it, experts say, since an immediate cure is much easier than a later one. Generally, a young child stammers because he has been forced to change from a left-handed to a right-handed way of doing things. Specialists explain that the left hemisphere of the brain controls the right side of the body, and vice versa. One of the two brain hemispheres always is “dominant.” Disturbing that dominance, before it has fully developed, produces mental confusion and affects the brain center of speech, causing stammering. After a boy or girl is sixteen years old, however, the dominance of one side of the brain is firmly established, and no harm can be done in making a right-hander out of a “southpaw.”

Helpful and interesting conclusions for adults also emerge from clinical observations of thousands who trip and stumble over their words. Get one of them good and mad, and he will forget to stammer! Evidently there is nothing wrong with the mechanical parts of his speaking organs. His real trouble might be likened to “static” in the control line linking the brain and the vocal muscles. Usually this results from undue nervous tension. Once a stammerer learns to overcome his nervous condition, or remove its cause, self-cures are readily possible. Thus anyone can regain and enjoy to the fullest his most human faculty, speech.