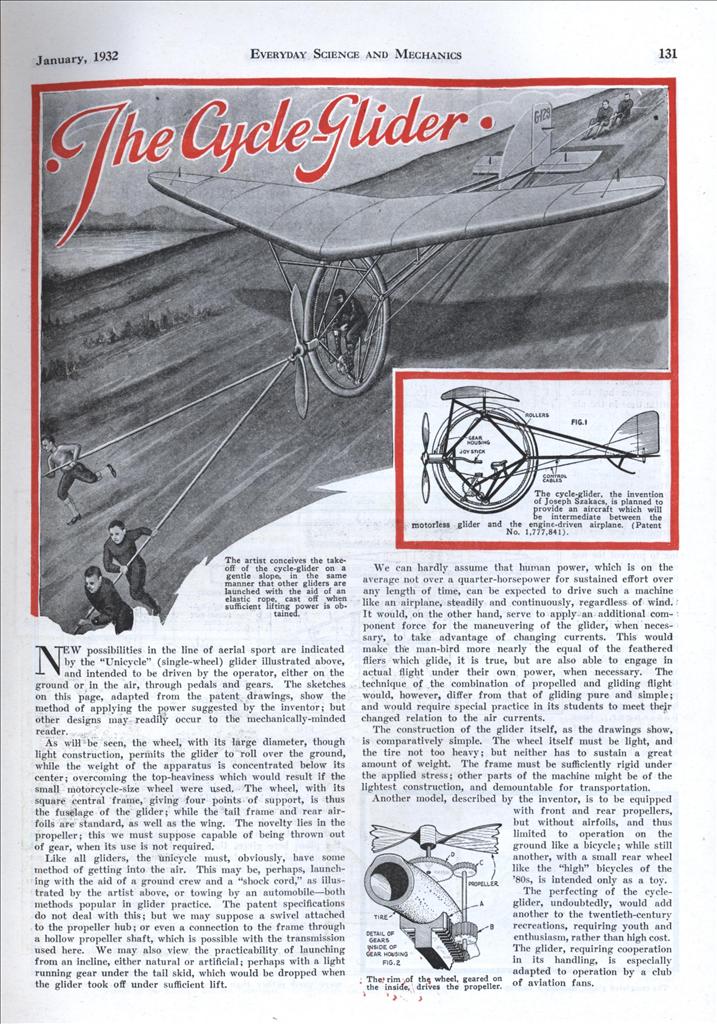 NEW possibilities in the line of aerial sport are indicated by the “Unicycle” (single-wheel) glider illustrated above, and intended to be driven by the operator, either on the ground or in the air, through pedals and gears. The sketches on this page, adapted from the patent drawings, show the method of applying the power suggested by the inventor; but other designs may readily occur to the mechanically-minded reader.

As will be seen, the wheel, with its large diameter, though light construction, permits the glider to roll over the ground, while the weight of the apparatus is concentrated below its center; overcoming the top-heaviness which would result if the small motorcycle-size wheel were used. The wheel, with its square central frame, giving four points of support, is thus the fuselage of the glider; while the tail frame and rear airfoils are standard, as well as the wing. The novelty lies in the propeller; this we must suppose capable of being thrown out of gear, when its use is not required.

Like all gliders, the unicycle must, obviously, have some method of getting into the air. This may be, perhaps, launching with the aid of a ground crew and a “shock cord,” as illustrated by the artist above, or towing by an automobile—both methods popular in glider practice. The patent specifications do not deal with this; but we may suppose a swivel attached to the propeller hub; or even a connection to the frame through a hollow propeller shaft, which is possible with the transmission used here. We may also view the practicability of launching from an incline, either natural or artificial; perhaps with a light running gear under the tail skid, which would be dropped when the glider took off under sufficient lift.

We can hardly assume that human power, which is on the average not over a quarter-horsepower for sustained effort over any length of time, can be expected to drive such a machine like an airplane, steadily and continuously, regardless of wind. It would, on the other hand, serve to apply an additional component force for the maneuvering of the glider, when necessary, to take advantage of changing currents. This would make the man-bird more nearly the equal of the feathered fliers which glide, it is true, but are also able to engage in actual flight under their own power, when necessary. The technique of the combination of propelled and gliding flight would, however, differ from that of gliding pure and simple; and would require special practice in its students to meet their changed relation to the air currents.

The construction of the glider itself, as the drawings show, is comparatively simple. The wheel itself must be light, and the tire not too heavy; but neither has to sustain a great amount of weight. The frame must be sufficiently rigid under the applied stress; other parts of the machine might be of the lightest construction, and demountable for transportation.

Another model, described by the inventor, is to be equipped with front and rear propellers, but without airfoils, and thus limited to operation on the ground like a bicycle; while still another, with a small rear wheel like the “high” bicycles of the ’80s, is intended only as a toy.

The perfecting of the cycle-glider, undoubtedly, would add another to the twentieth-century recreations, requiring youth and enthusiasm, rather than high cost. The glider, requiring cooperation in its handling, is especially adapted to operation by a club of aviation fans.