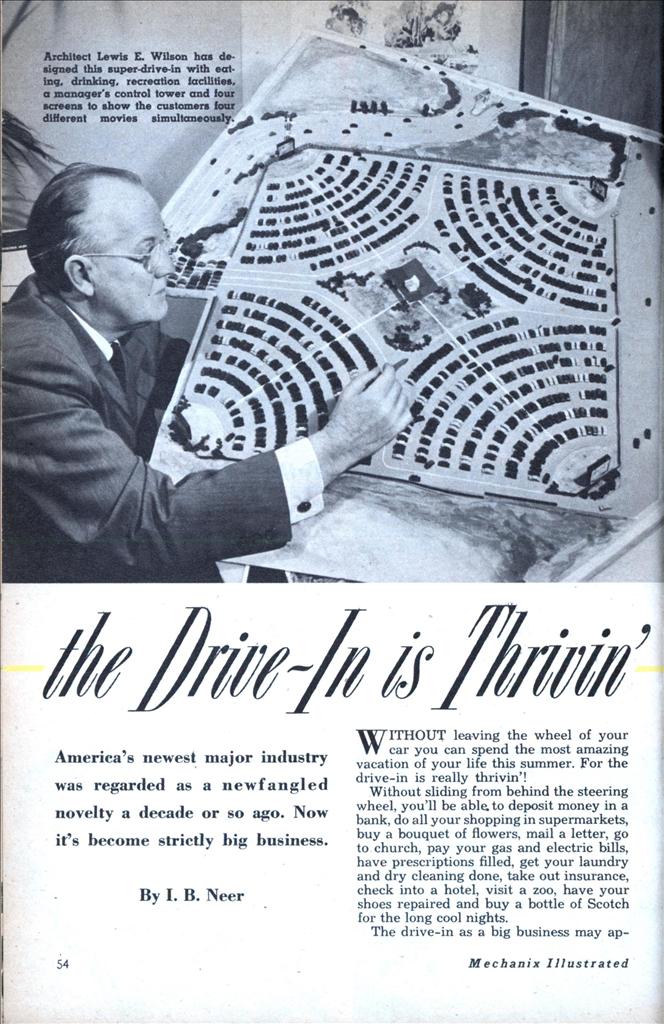 America’s newest major industry was regarded as a newfangled novelty a decade or so ago. Now it’s become strictly big business.

WITHOUT leaving the wheel of your car you can spend the most amazing vacation of your life this summer. For the drive-in is really thrivin’!

Without sliding from behind the steering wheel, you’ll be able, to deposit money in a bank, do all your shopping in supermarkets, buy a bouquet of flowers, mail a letter, go to church, pay your gas and electric bills, have prescriptions filled, get your laundry and dry cleaning done, take out insurance, check into a hotel, visit a zoo, have your shoes repaired and buy a bottle of Scotch for the long cool nights.

The drive-in as a big business may appear to have burst suddenly on the American scene, but actually the trend was being developed for more than 20 years. A few roadside restaurants made their first inquiring venture into the feed-’em-on-the-run field in the mid-20s and found it paid off handsomely.

Then businessmen in the cities, searching for a solution to the parking problem, took a cue from their country cousins. They started to convert their facilities so that motorists would be spared the wearisome hunt for an open spot on the traffic-choked streets. Again car owners hailed the innovation and before long Yankee ingenuity had developed a new industry.

Look what happened at Jackson Hole Wildlife Park near Moran, Wyo. On hand was the nation’s largest assortment of native big-game animals—buffalo, deer, elk, moose and antelope, last remnants of the vanishing American herds. The officials thought long and hard and finally leaped on the drive-in bandwagon as the best way to give tourists a real close-up of the animals in their native habitat.

Accordingly, they veined the large wooded area with a network of roads and strung almost invisible fences through the fields which keep the animals constantly in sight of motorists driving past. The herds cannot escape the enclosure because of a tricky device at the entrances. Timbers, criss-crossed along the first few yards of roads, are easy for a car to traverse but impossible for an animal.

Four years ago the Rev. Norman L. Hammer of North Hollywood, Calif., decided to do something about the 40 per cent slump in summer attendance at his Sunday services. Making a sort of one-man Gallup survey, he’ found that his parishioners were tempted by picnic grounds, beaches and golf courses come Sundays. Dressing for church, then rushing home to get into play garb, took too much time. So the pastor met his flock halfway.

He fitted up a pulpit in a parking lot behind his church and spread the word that parishioners could drop in on their way to play. First outdoor service was held on July 6, 1947, and soon swank convertibles and wheezing jalopies were pulling in side by side for Sunday morning worship.

Says the pastor with a twinkle in his eye: “The outdoors gets them on Sundays, but we get them first.”

Perhaps the most surprising development in the spectacular growth of the drive-in industry is the fact that such conservative institutions as banks have joined the parade. Eyebrows flew upward in financial circles back in 1936 when the City National Bank of South Bend, Ind., set up a teller’s window facing an alley and announced it was open for curb-service banking. But the idea took root and, according to the American Banking Association, has now spread to more than 500 institutions in 18 states.

The country’s largest and most elaborate drive-in bank is the Exchange National Auto Bank of Chicago, 111., where an average of 600 cars purr past the tellers daily, making 40 per cent of the total deposits. It is constructed in the shape of a huge U surrounded by driveways with ten tellers’ cages in the center. Attendants funnel the cars to the windows and tellers push out metal drawers into which customers drop money, bankbooks and necessary papers. Tellers and depositors communicate through a loudspeaker and microphone arrangement. If the services of a bank officer are needed, the tellers shoot him the papers via pneumatic tubes.

Drive-in theaters have come a long way since the first was opened strictly as a novelty outside Camden, N. J., in 1933. Hit by an almost disastrous slump during the war, they bounced back to the point where in Denver 7,000 persons waited two hours to see a movie, the first world premiere ever to be shown in a drive-in.

Some drive-ins which know all about baby sitting and home-chore problems, cheerfully tell patrons not to stay home on those accounts. They supply nurses and bottle-warming equipment and even do the family laundry while the show is on. The patron deposits a bundle of wash when he enters and gets it back clean when he leaves.

Rainy, windy or foggy nights used to strike deep gloom into the ranks of drive-in owners, but they don’t any more as the battle against the elements is being won. Scientists have now developed a glycerine compound which is sprayed on car windshields to drain off the downpour in transparent sheets instead of driblets. Steel reinforcements keep the huge 50 by 60-foot screens from swaying or toppling in high winds. DDT has banished the mosquito plague and fog-filters have been perfected so that projectionists can sharpen the picture when the mists descend.

The drive-in-and-dine spots come in two models—those in which cute car hops clamp food-laden trays to the car doors, and fully automatic ones which do away with waitresses, tipping and leg work. Perhaps the world’s biggest and swankiest drive-in beanery is the $750,000 edifice near downtown San Francisco, which sprawls over one and one-eighth acres and employs nearly 200 persons, including four traffic cops who flag customers into spots along the 250-car parking area. It serves more than 7,000 meals a day from two huge kitchens, filling each order in an average of six minutes. Otto E. Straub, the builder, spent eight years in an intensive study of food drive-ins before launching his enterprise.

The Motormat in Los Angeles, the first fully automatic drive-in restaurant, served 10,500 meals in its first nine days of operation a few years ago. A motorist parks in one of 20 stalls which fan out from a central, glass-enclosed kitchen. As he slips into place, a bin shaped like an old-fashioned breadbox shoots out from the kitchen on a runner and stops at the car door.

Inside the bin are glasses of water, a menu, a pad and pencil. The customer writes his order, pushes a button and the bin scoots back into the kitchen. In less than a minute, back comes the bin with the bill which must be paid before the meal is served. On its third trip the bin brings the order plus change.

With skyrocketing demand, there appears to be no limit to the types of business flocking to cash in on the curbside gold rush. The National Institute of Cleaning and Dyeing reports that roadside dry-cleaning places are opening by the dozen each week. Laundry field experts say that ten per cent of the nation’s laundry business is now transacted at windows which open on a driveway.

In many communities you can roll into a supermarket and make all your purchases without leaving the car. A California market sports a huge sign at the entrance: “If you don’t see what you want, just keep on driving until you do.”

Even the U.S. Government has become aware of the trend and stepped into line. In many cities, the post office has installed curb-side mailboxes with large gooseneck openings into which drivers can deposit mail without dismounting.

There’s really no end to the variations. The Detroit Edison Co. has opened an office where motorists can drive in, pay bills, leave appliances for repair, arrange for service and drive out. A number of insurance firms have set up offices in driveways and a drive-in night club is doing thriving business in Los Angeles.

In Beverly Hills, Calif., a drive-in liquor store has one rigorous rule. When a customer drives up, the salesman steps out, takes a good look and a big sniff. If he detects any tipsiness whatsoever, he sends the driver on his way. The store won’t sell liquor to drunks.

So, if you’re planning to hit the road this summer, don’t worry about missing the comforts and luxuries of home life. You can get ’em in drive-ins. All you need is the car, the endurance—and the money. •