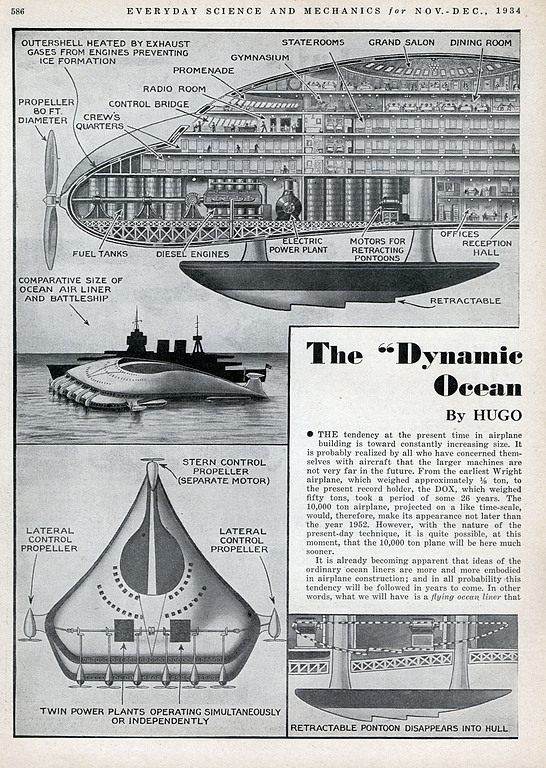 It is already becoming apparent that ideas of the ordinary ocean liners are more and more embodied in airplane construction; and in all probability this tendency will be followed in years to come. In other words, what we will have is a flying ocean liner that is not only airworthy, but is seaworthy as well. It is also a foregone conclusion that when a 10,000-ton aircraft is built, it will not be a land-type plane but for obvious reasons will have to land in water. This makes the landing and taking off much easier and more practical; because it would be most difficult to take off with, or land, a 10,000-ton weight on terra firma.

The question may be raised, why such a large craft? The same principle that holds good for large ocean liners holds good for large airplanes. In the first place, in order to make it as economical as possible, the craft must carry a sufficient amount of freight and passengers, and it must also be sufficiently speedy; and, if past history is a teacher, it will be found that higher and higher transatlantic speeds are needed. The new French express steamer, Normandie, will make the Atlantic crossing from Cherbourg to New York in less than four days. The aircraft of the future, in order to compete at all, must make it in less than a day. This calls for high speed, and safety as well, which can only be accomplished by great speed.

I visualize an airliner of the future along the following lines:

We will have a sort of flying wing, from six to seven hundred feet wide, and as long, or longer. It may be roughly triangular in shape. In order to do away with all possible wind resistances, the aircraft must be streamlined as much as possible.

In the November, 1932 issue of Everyday Science and Mechanics, I presented a gigantic flying liner, which had two huge pontoons to support the upper structure. Liners of this kind are under construction this very minute, although not of the very large size which I visualized in 1932, yet we are getting there gradually.

There is one disadvantage with this type, however, and that is the two pontoons offer a tremendous air resistance. In the design which I present herewith, I still use the pontoons; but I have made them retractable; so that, as soon as the airplane has taken off, they will be pulled into the body of the airliner, where they will no longer offer air resistance. This is accomplished by pneumatic-hydraulic action when the machine has to land in water.

The outstanding novelty of my present design, however, is in the dynamic controls of the airliner. In the normal airplane, we have the movable wing surfaces or ailerons for banking and turning the plane, as well as the tail and rudder to guide it in the various directions. In the present design, I have done away with these entirely, and used propellers for these purposes entirely. A number of small “line” illustrations show the principle. The tail becomes a huge 75-foot propeller, which is arranged in such a way that the propeller can point either forward, sideways, up, or down. The direction of the propeller is, of course, handled by controls from the bridge of the airliner. Similarly, the ailerons, which are now used to tip or bank the machine, are dispensed with; and we now have huge propellers with engines which also can be either raised or