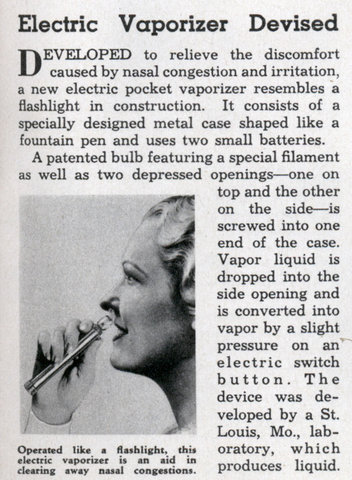 Electric Vaporizer Devised
DEVELOPED to relieve the discomfort caused by nasal congestion and irritation, a new electric pocket vaporizer resembles a flashlight in construction. It consists of a specially designed metal case shaped like a fountain pen and uses two small batteries.

A patented bulb featuring a special filament as well as two depressed openingsâ€”one on top and the other on the sideâ€”is screwed into one end of the case. Vapor liquid is dropped into the side opening and is converted into vapor by a slight pressure on an electric switch button. The device was developed by a St. Louis, Mo., laboratory, which produces liquid.