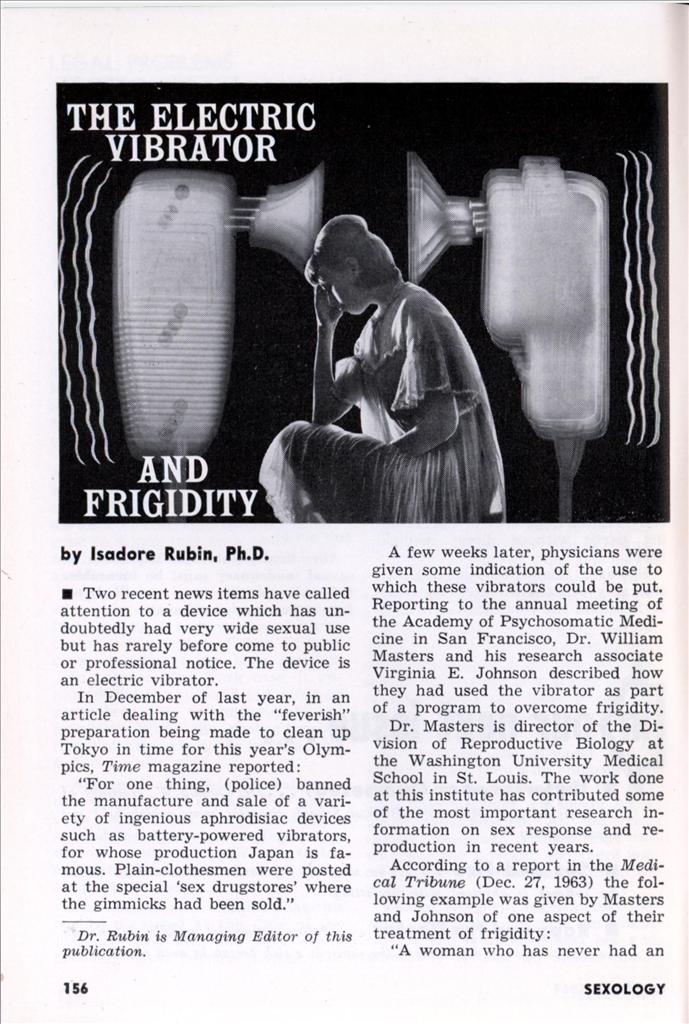 by Isadore Rubin, Ph.D.
Dr. Rubin is Managing Editor of this publication.

In December of last year, in an article dealing with the “feverish” preparation being made to clean up Tokyo in time for this year’s Olympics, Time magazine reported: “For one thing, (police) banned the manufacture and sale of a variety of ingenious aphrodisiac devices such as battery-powered vibrators, for whose production Japan is famous. Plain-clothesmen were posted at the special ‘sex drugstores’ where the gimmicks had been sold.”

Dr. Masters is director of the Division of Reproductive Biology at the Washington University Medical School in St. Louis. The work done at this institute has contributed some of the most important research information on sex response and reproduction in recent years.

Each time a response occurs the distance between nerve cells becomes narrower. A worn pathway makes it easier for nerve impulses to be transmitted.

Thus, the important thing in marital sex response is to form the habit of orgasm. Once this has been done, one could then go on to orgasm in intercourse.

Most marriage counselors, however, feel that a device such as this should he used with considerable caution, even though it may be effective in bringing about orgasm.

Psychiatrists have also pointed to the dangers of trying to cure a deep-seated problem by merely getting rid of a particular symptom. While the problem may seem to be solved temporarily, it may return with greater force—perhaps in a different form—in the future.

However, she also had some careful warnings to make about its use. It was very easy, she said, for a woman to come to rely upon it completely; in fact some became actually “addicted” to it.

All of those who have had experience with it admit that it may possibly be an effective learning device to show the woman just what the experience of orgasm consists of.

At any rate, one important thing has been established—counselors should not ignore the potential value or harm of these devices, but should carefully evaluate their immediate and long-term effects.