Modern Mechanix
Issue: Jun, 1934
Posted in: Nautical
No Comments on The Fighting NORTHLAND RESCUE SHIP of the Arctic (Jun, 1934)

The Fighting NORTHLAND RESCUE SHIP of the Arctic (Jun, 1934) 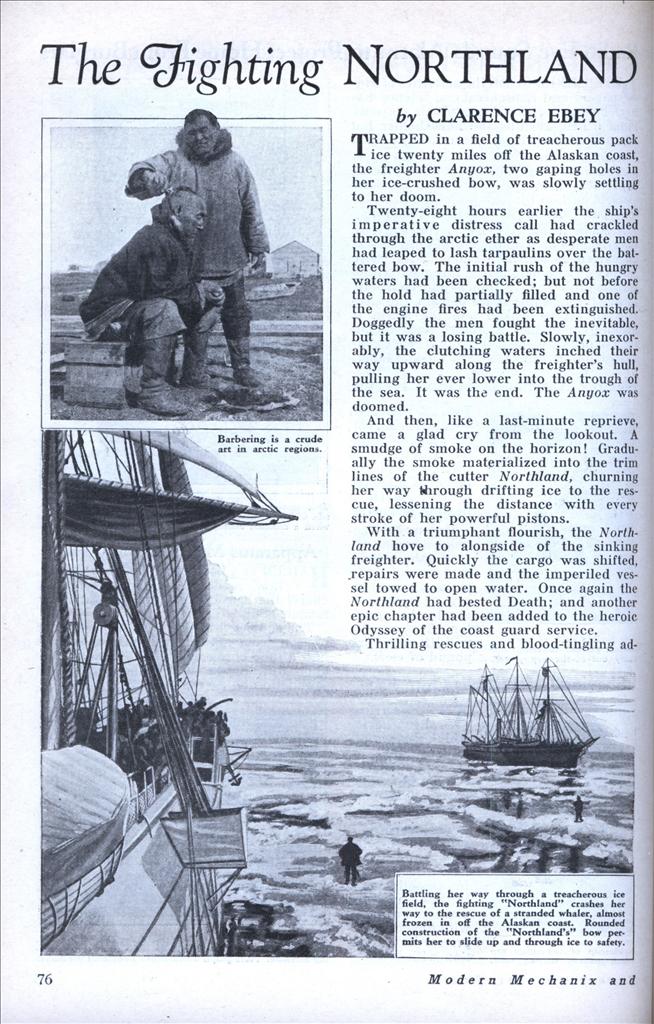 The Fighting NORTHLAND RESCUE SHIP of the Arctic

TRAPPED in a field of treacherous pack-ice twenty miles off the Alaskan coast, the freighter Anyox, two gaping holes in her ice-crushed bow, was slowly settling to her doom.

Twenty-eight hours earlier the ship’s imperative distress call had crackled through the arctic ether as desperate men had leaped to lash tarpaulins over the battered bow. The initial rush of the hungry waters had been checked; but not before the hold had partially filled and one of the engine fires had been extinguished. Doggedly the men fought the inevitable, but it was a losing battle. Slowly, inexorably, the clutching waters inched their way upward along the freighter’s hull, pulling her ever lower into the trough of the sea. It was the end. The Anyox was doomed.

And then, like a last-minute reprieve, came a glad cry from the lookout. A smudge of smoke on the horizon! Gradually the smoke materialized into the trim lines of the cutter Northland, churning her way through drifting ice to the rescue, lessening the distance with every stroke of her powerful pistons.

With a triumphant flourish, the Northland hove to alongside of the sinking freighter. Quickly the cargo was shifted, . repairs were made and the imperiled vessel towed to open water. Once again the Northland had bested Death; and another epic chapter had been added to the heroic Odyssey of the coast guard service.

Thrilling rescues and blood-tingling ad- venture are all part of the day’s work for the fighting Northland. For approximately six months of every year, from May to November, the sturdy warrior threads the bylanes and the danger zones of the arctic, smashing her way through the menacing ice floes on missions of mercy. Her job is to rescue the lost, succor the needy, heal the sick and to pursue the lawbreaker. The Northland is all things to all men â€”a scourge to evildoers and a savior to the suffering and distressed.

A noble heritage has spurred the Northland on. For fifty-four years her predecessor, the famous Bear of Oakland, now with Admiral Byrd at the South Pole, braved the menace of the same northern waters. Nearly fifty years ago the Bear, then commanded by Commodore W. S. Schley, of Spanish-American war fame, made history when she crashed her way through 1400 miles of ice to find and rescue the members of the Greely expedition at Cape Sabine.

No less than her brave and gallant predecessor, the Northland has upheld the glorious traditions of the coast guard service in aiding the helpless and the imperiled in Alaska’s far-flung waters. Six full voyages has she made and one of shorter duration, soon after her completion, in 1927. Each has teemed with excitement and has added new luster to the name of the doughty conqueror of the ice-locked wastes.

There was the case of the Norwegian trading steamer, Elisif. Caught in a death grip between drifting ice packs and the stationary shore ice near North Cape, Siberia, the vessel was crushed and partially sunk. After her crew of fifteen had walked ashore over the ice, carrying a portion of the food supplies to the natives, the men took the balance of the ship’s stores and boldly set out in two power boats and two barges to reach civilization. For eighteen days they cruised the open seaâ€”500 miles in allâ€”until they finally reached United States territory. At East Cape, near Little Diomede island, the Northland found them, suffering intensely from exposure and starvation and took them to Nome.

On another occasion, trader Jim Allen and a group of the Eskimos he fathers and counsels at Wainwright, Alaska, were in dire straits. Because the walrus herds which usually drift in on floating cakes of ice had stayed far out that season, the group was facing slow starvation. The Northland took the hunters 150 miles out to the ice packs, found a school of walrus and helped the native hunters to shoot live of the beasts.

Cruising near Point Barrow, northernmost Alaska point, the Northland heard a radio cry: “Woman dying! Send help!” It was from T. S. Scupholm, American school teacher and general director of the natives at Savoonga, a little settlement on St. Lawrence island in the Bering Sea. The ship’s physician diagnosed the trouble and prescribed treatment by radio, as the Northland sped along on her 200-mile run. For the last fifty miles the gallant cutter battled heavy fog and menacing blocks of ice. The lookouts could see scarcely fifty feet before them. Mrs. Scupholm was found in a dangerous condition, treated on board the Northland and hurried to Nome.

The Northland’s adventures and services to humanity have been many and almost uninterrupted during her comparatively brief career. On one northward journey she carried a small hand organ, to be used by Archdeacon Hi A. Goodman in his Episcopal Mission at Point Hope. On another occasion the Northland took the archdeacon on his annual trip from Point Hope to Point Barrow. Learning that his “children, ” the natives, were faced by a lack of food, the cutter’s captain ordered her to cruise until a group of the animals were found sunning themselves on the ice. The crew shot enough to provide meat for the 200 inhabitants of Point Hope until the drifting ice sent the walruses in closer. As the Northland approached Point Hope, fifty women and girls, who had heard the glad news, gathered on the beach and sang songs of praise.

In the old days life at Point Hope was wild and unfettered. Liquor flowed freely and passions often were unchained. It was at Point Hope that the natives conspired to murder their cruel, tyrannic chieftain, Ah-ten-ow-rah. Lots were drawn to choose the slayer and, after a shot through the window of his igloo had wounded him, one of his wives, in the plot, finished him with a knife. But those turbulent times arc gone. Uncle Sam stamped out the liquor menace years ago; and every sea captain knows now, with the Northland on watch, what it would mean if he were caught giving “fire water” to the natives.

A Timely Rescue Another of the Northland’s deeds, a mere incident in her day’s work, was the rescue of two men seen, through glasses, staggering along the shore about twenty miles east of Point Barrow, desperately signaling to attract notice. After a small boat had taken them to the ship, it was found they were Jack Robertson of Oakland, Calif., and Ewing Scott, assistant director for a Hollywood motion picture outfit. They and three others had been flying in two airplanes from Fairbanks to Nome when their plane was forced down. For twenty-one days they had been lost, while rescue parties searched constantly for them. Starved, unkempt, their strength almost gone, they were in despair. But the Northland picked them up and took them to Nome.

Tragedy and death followed the ship Good Hope, despite rescue by the North-land. The cutter was at Teller when the radio station at Deering, 250 miles away, reported the Good Hope helpless, her engines broken down, in Kotzebue Sound nearby. It required twenty-four hours for the Northland to reach her. She was towed the entire distance to Teller, where she was repaired and put out to sea again. A month later, however, the wreckage of the Good Hope was washed up on the beach at Cape Prince of Wales. She had capsized and broken in two on the shoals in a terrible storm, going down with all of her crew.

Crashing Through Ice to Safety When winter begins to close in, the Northland keeps track of all of the ships remaining in the ice region. Knowing the steam freighter, A. J. Baldwin had started from Nome to Seattle, the Northland found her fifty miles south of Nome, befogged and hemmed in with ice. Her lookouts could see nothing through the dense fog. Crushing her way through the menacing ice field, the cutter piloted the helpless vessel out of immediate danger and told her of a “lead” out of the ice, several hundred yards wide, four or Vive miles away.

The dramatic discovery and rescue of “Jimmie” Mattern, famous ’round-the-world flyer, whose airplane had crashed at Anadir, was emblazoned to the world from Nome. Radio advices from the Presidio, San Francisco, after Mattern had resumed his journey in a Russian plane, sent the Northland hurrying to Chukotski, in Russian territory, and to Indian Point, in the same vicinity. They learned that residents thought they had heard the roar of an airplane motor, but that was all. A week later the cutter anchored at Nome in a heavy fog. Mattern and his two Soviet companions were searching at the moment for Nome, but were lost in the fog. They were almost completely out of gas. Suddenly the fog lifted. They were three miles out. There lay Nome almost at their feet, with the Northland riding the gentle swells in the bay. The aviators dropped to the water and took to a collapsible rubber boat. The Northland sent a fast motor boat to their rescue and carried them to safety at Nome.

The Northland is equipped with every facility to aid the needy, from her “floating hospital” to her complete mechanical outfit. She is 216 feet long and is of 2100 tons gross tonnage. Her cruising radius, 17, 000 miles, is said to be as wide as that of any vessel afloat. Her hull is protected by a 1/4-inch steel plate extending three feet above and six feet below the water line. Three inches of cork line the quarters of both officers and men to guard them from the bitter cold.