It’s interesting that for all of their excitement about ENIAC and future computers, people still only thought of computers as giant calculators. I guess that’s because they hadn’t been paired with a reliable storage mechanism yet. It’s hard to have an airline database without a place to store the fares and tickets… 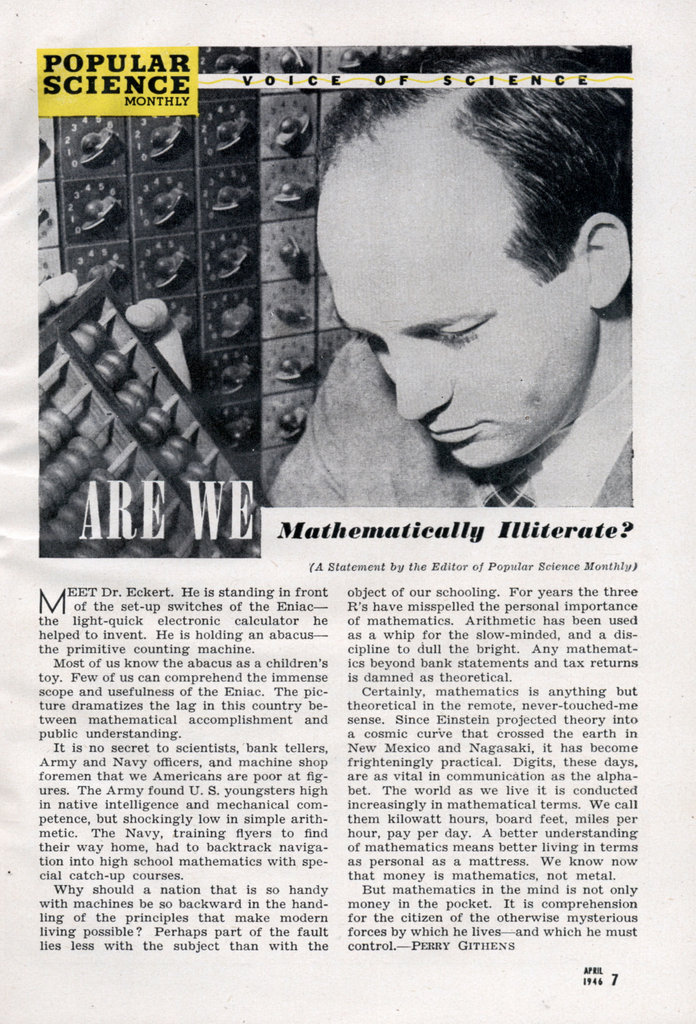 EQUATIONS THAT SPELL PROGRESS ARE SOLVED BY ELECTRONICS

SOME day, travelers may step out of a plane in San Francisco 10 minutes, by local clocks, before they left New York. That day has been brought closer by the work of two brilliant young engineers at the Moore Electrical Engineering School, University of Pennsylvania. Dr. John W. Mauchly (38) and J. Presper Eckert, Jr. (26) have designed and built, with an assist from Army Ordnance, the world’s first all-electronic computer. The speed and scope of this digital wizard will revolutionize methods of modern industrial design. It is expected to put mathematics back into industry as an economical, rapid tool, saving months of figure work and accomplishing part of the presently impossible. The plane, rocket, or wing, in which a passenger may travel well over 1,000 miles per hour is now just a ghost on a blueprint. Engineers at Republic Aviation Corporation say it is hidden somewhere under a huge mass of highly complicated mathematical equations. The engineers believe that those equations must be completely analyzed before any promises can be made about super-sonic speeds. The Eniac (Electronic Numerical Integrater and Computer) has made complete mathematical analysis of that kind feasible for the first time.

This would have been the first problem fed into the Eniac if the war had not ended when it did. The 30-ton numerical monster would have turned out all the answers in 130 hours. No other machine in existence could have done it in less than a year.

The Eniac is 1,000 times faster than its best-known predecessor, the mechanical computer built for the Navy and installed at Harvard by International Business Machines (PSM, Oct. ’44, p. 86). Differential analyzers, like the famous machines at MIT and Pennsylvania, widely used during the war, are limited in the kind of problem they can handle. No one has yet found a problem too tough for Eniac. Its accuracy, moreover, is much greater than that of the analyzers, which solve problems by mechanical translation.

Dr. Mauchly first recognized the need for a high-speed computing machine while working with immense quantities of geophysical data at the Carnegie Institution in Washington. “Why not use electrons?” he thought. When he joined the Moore School in 1941 he met members of the Ballistic Research Laboratory of Aberdeen Proving Ground. Their problem was the sameâ€”how to turn out mile after mile of figures in a practical length of time. Firing and bombing tables were urgently needed to keep up with advances in weapons. In addition, Army Ordnance experts needed a machine that would enable them to explore the mathematics of their field far beyond the point they could then go.

Captain Herman Goldstine, of Ordnance, a mathematician himself, was enthusiastic about Dr. Mauchly’s ideas and fast-talked the Army into pushing the project. Dr. Mauchly and Mr. Eckert, a recent Moore School graduate, started work in 1943 and finished in late 1945. They invented several other electronic counting devices on the way. Dr. Mauchly gave one of these, an elementary gadget, to his young son. Its flashing neon lights made a fascinating crossing signal for the youngster’s electric train.

The Eniac is now housed in a 30- by 50-foot room, ventilated to draw off the heat generated by its 18,000 electronic tubes. Entering this room through an inconspicuous door at the end of a hallway in the Moore school, visitors find themselves suddenly hemmed in by dials and cables. Forty panels cover three sides of the room with switchboards.

The machine has 20 accumulators, the panels that add, subtract, and “remember.” Three function tables of two panels each also contribute to this memory. By means of these panels, entire series of trigonometric functions, for example, may be applied at electronic speed to any numbers in the machine. There is one panel that does the dirty work of division and square root. The other panels contain the initiating unit, where the first button is pushed; “programmers,” which police the circuits and permit any variations of the basic operations: and the cycling unit, which sends out 5,000 pulses per second. Above the panels are trays of wires that carry the numbers. Wires in other trays, below, carry the orders. Connected to the Eniac, a part of the complete installation, are two modified punchcard machines that permit the mysterious device to communicate with the outside world.

When using the Eniac, a mathematician must set up the equation, because the machine only does what it is told. The mathematician details the entire sequence of what he wants done. He figures out just how each cable will be connected and to what panel. Care must be taken to see that these sequences are properly timed. Instructions can be typed out and posted at the bottom of each panel. Someone else then can set the dials and do the actual connecting. When everything has been checked, the operator pushes a button in the initiating unit and goes off for a glass of water. The Eniac buzzes, clicks, and the job is done.

The operating pulse is sent out by an oscillator at the rate of 100,000 per second. A counter collects these in groups of 20â€” the basic impulse. It is this pulse, or one like it, that does the work.

In effect, when two numbers are multiplied in the machine, the impulse travels to the reader and tells it to send a number into the transmitter and then to one of the accumulators. Meanwhile, an order has gone out to the accumulator to accept this number when it arrives, ordering the panel to hold it until it gets another instruction. Another pulse meanwhile picks up the second number and sends it in the same way to a second accumulator. Orders then arrive for each accumulator to send numbers to the high-speed multiplier. This unit has been told to take the two numbers, multiply them, and send the result to the printer. Each panel has incoming and outgoing gates at the top and bottom. These gates are controlled by a series of relays, which determine the time each will be open. Each panel also sends out an impulse when it finishes its job, so the entire machine is self-fed after the chain has been started. Any combination of panels can be used from two to 40. A panel can be withdrawn for repair or testing. But the Eniac operates at such terrific speeds that its working cannot be checked without stopping it, which can be done at any point.

Physically, the Eniac is the most intricate and complex electronic device in the world, with 500,000 soldered connections, 70,000 resistors, 10,000 capacitors. Other machines using the same principles need not be so complicated. Scientists have enough unsolved, important problems to keep a hundred Eniacs busy for the rest of time. But there is also a great need for simpler highspeed machines that can handle less complex problems.

The history of science is studded with immensely valuable theories that lie unused because of the arduous calculations needed to put these theories to practical purposes. Astronomers say that in their field alone there are enough problems to keep at least one Eniac busy. The methods of weather predicting are still largely intuitive because no one has had the time to analyze the figures accumulating for decades.

Industry, of course, cannot stand still during the time lags between theory and applied science. The thermodynamic engineer, for example, knows that his best design lies within certain broad limits that he can determine with comparative ease. But, at this point, the mathematics becomes so arduous that he is unable to get all his answers. The manufacturer of gas turbines doesn’t stop work, however, when the mathematics of the cylinder design gets too unwieldy for his engineers to handle. He uses other tools. He starts building models â€”an expensive and time-consuming process that nonetheless had been cheaper and quicker than any other available method of analysis. He may have to build two thousand models before be clarifies one small point that has been holding him up.

The designer of radio tubes builds rubber models of his electrical fields. He rolls steel balls through these fields to represent the flow of electrons. This may have to be done hundreds of times before some slight change can be made in the tube.

Republic’s new high-altitude reconnaissance plane, the Rainbow, is estimated to have cost in the neighborhood of $8,000,000, a quarter of which was engineering cost. This plane, of course, is the latest in a long series. It was the end product of all the tests that have been conducted and all the planes that have been built since the Wright Brothers first flew at Kitty Hawk. No one can estimate how many models have been built in that time, or how much those models cost. The model cost of the airplane industry runs up into the millions. A very high percentage of those models might have been unnecessary if the designers and engineers had been able to use a high-speed computer to work out the mathematics of their complicated patterns. Wind tunnels are expensive to build and operate. Yet, sometimes as much as half the time of these tunnels is devoted to solving problems that could be done by the Eniac, in far less time. And this first Eniac cost about $400,000.

Nothing that man has ever built has been possible without the use of numbers. The cost of handling those figures is a part of the price of every product of modern industry. The Eniac, or even better machines that can now be built with this one as a basis, points the way to a faster and more economical way of handling numbers. It promises cheaper air travel, better radios, wider use of micro-waves, and more efficient motors, for example. With the help of lightning-fast computers to do most of the drudgery on problems that have baffled men for many years, today’s equation may be tomorrow’s rocket ship.