Popular Mechanics
Issue: May, 1936
Posted in: General
6 Comments on The FIRST ROCKET AIR MAIL FLIGHT (May, 1936) 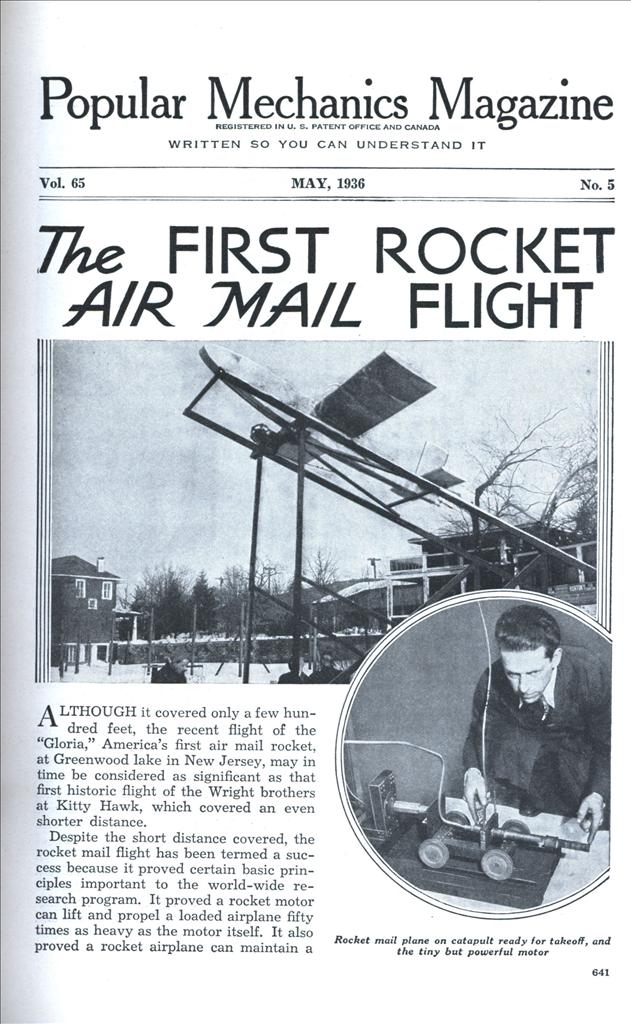 ALTHOUGH it covered only a few hundred feet, the recent flight of the “Gloria,” America’s first air mail rocket, at Greenwood lake in New Jersey, may in time be considered as significant as that first historic flight of the Wright brothers at Kitty Hawk, which covered an even shorter distance.

Despite the short distance covered, the rocket mail flight has been termed a success because it proved certain basic principles important to the world-wide research program. It proved a rocket motor can lift and propel a loaded airplane fifty times as heavy as the motor itself. It also proved a rocket airplane can maintain a safe stability while in the air. From the first flight, it appears the principle of the reaction motor is basically sound, although it can stand improvement.

The “Gloria” was an undertaking of the Rocket Airplane Corporation of America, while the aerodynamic design of the wings and fuselage was the contribution of the Guggenheim School for Aeronautics. Loaded with air-mail covers addressed to stamp collectors, the “Gloria” skidded to a halt on the ice about 2,000 feet from the point of takeoff. The “Gloria’s” two-pound motor actually develops 300 horsepower per minute. On the test block it registered almost fifty pounds of reaction on a measuring device. Propelling a 100-pound airplane at a speed of about 4,000 feet per second, the rocket motor would develop an equivalent of 160,000 foot-pounds per second.

While the motor is simply a hollow pipe with no moving parts, its construction involved many difficulties. At present the main difficulty in building a rocket motor is in finding a metal or other substance to withstand the intense heat generated, about 2,000 degrees centigrade. All the common and many rare metals melt at lower temperatures. The “Gloria’s” mo- tor was made of monel metal. When a better heat-resistant substance is developed, there will be a great improvement in the performance records of rockets.

Another important consideration at present is fuel. After many disappointments, rocketeers have abandoned powder fuel and substituted liquid fuels. Powder rockets create detonation waves which cause dangerous explosions. Liquid fuel lends itself to easier manipulation and control, and is safer to handle. The “Gloria’s” motor burned a mixture of powerful fuels blended in a combustion chamber. Fuel tank No. 1 contained liquid oxygen, temperature about —200 degrees centigrade; tank No. 2 contained a mixture of alcohol, gasoline, methane and other liquids; tank No. 3 contained com- pressed nitrogen gas. The nitrogen gave the necessary pressure to the other tanks.

As the liquids from tanks one and two are sprayed into the combustion chamber, they explode with a terrific impact. The sudden combustion generates a hot gas having a volume many thousands of times the original volume of the fuels. The pressure of the escaping gas lifts the rocket against gravity. Theoretically, the “Gloria” was supposed to build up her speed until she reached a maximum of 500 miles per hour. This is a long way from the speed required to escape the earth’s gravitation—25,200 miles an hour.

Rocketeering experimenters are not especially interested now in exploring outer space. They want, first, to build a rocket that will be useful for high-speed communication in comparatively low altitudes. Such rockets would be useful in sending mail to remote and inaccessible places. Military tacticians see still other possibilities. A rocket might be made into a flying projectile with its own power-generating plant. It would fly faster than the fastest airplanes and escape anti-aircraft attacks. For obvious reasons, both the airplane and the balloon are inefficient above 40,000 feet, but the rocket motor operates better in a vacuum than at low altitudes.

With the rocket motor, there is no waste of energy in the transmission of power through shafts, gears, or drives. For the first time, man has found a means of getting power direct from the heat of combustion. That is the principle of the reaction motor, and it is likely to find many useful applications in the future. Theoretically, at least, the rocketeers have gone far. One has already designed a rocket airplane with a propeller. The combustion chambers are contained within, the propeller blades. They have also studied the possibilities of man-carrying rocket airplanes. A 150-pound man in a 250-pound ship would require fifty pounds of rocket fuel for an eight-mile flight.

A vista of what air travel by rockets may be like fifty years hence has been opened by the patent of Prof. Robert H. Goddard, Clark University scientist, who has been experimenting for years at Roswell, N. M., with funds supplied jointly by the Carnegie Institution of Washington and the Daniel and Florence Guggenheim Foundation.

The Jekyll-Hyde aircraft, as described in the patent, would change its shape from a conventional airplane at lower altitudes to a streamlined rocket ship when the rarefied stratosphere is reached. In the troposphere—the layer of air immediately surrounding the earth—the rocket airplane has wings, propellers, a tail skid, landing wheels, rudder and other conventional parts. In the stratosphere and above, all projecting parts disappear into the body and only stubby wings are left.

Instead of being driven by propellers at these high altitudes, the rocket ship is hurled along by jets of gases streaming at high speed from nozzles in the tail. Passengers would be protected from changes in temperature and pressure by the peculiar air-tight and insulated construction of the craft’s body. The craft would carry a supply of oxygen for the passengers.

When flying as an airplane, the propellers would not be driven by supercharged gasoline motors, but by hot gases resulting from the combustion of hydrogen and oxygen. Shot against the blades of turbines to which the propellers are connected, these gases would whirl them at tremendous speeds, much as steam shot against the myriads of blades on turbo-electric generators spins the generators to produce electricity.

From Dr. Goddard’s aircraft may spring the rocket-propelled air liner which will solve tomorrow’s transportation problems. The versatility of Dr. Goddard’s craft may solve several difficulties now surrounding rocket flight. At low speeds a rocket is inefficient. While flying several thousands of miles per hour, it does not require any wings, yet in taking off and landing the opposite is true. Dr. Goddard’s rocket plane takes both these factors into consideration. On entering the upper heights where the propeller fails to “bite” efficiently into the rare atmosphere, the pilot would operate levers to retract and fold up the propellers, telescope the wing tips and pull in the landing gear.

Simultaneously the “rocket motor” goes into action, shooting from nozzles the gases which hurl the rocket through space. When the rocket plane has reached its destination, and reenters the lower air levels, rocket motors are shut off, propellers, wing tips, rudders and landing gear all unfold.

Among the immediate difficulties of constructing such a rocket plane is the need for a suitable metal to withstand the enormous forces of erosion where the jets of gases strike the turbines whose job it is to turn the propellers at low altitudes. In present-day rocket tests, much less pretentious than the patented rocket plane, difficulty is already found because it seems impossible to make an orifice which will withstand the escaping gas jets. The openings will work for a short while but the high temperatures plus the velocity of impact of the gas against the metal soon wears them out.