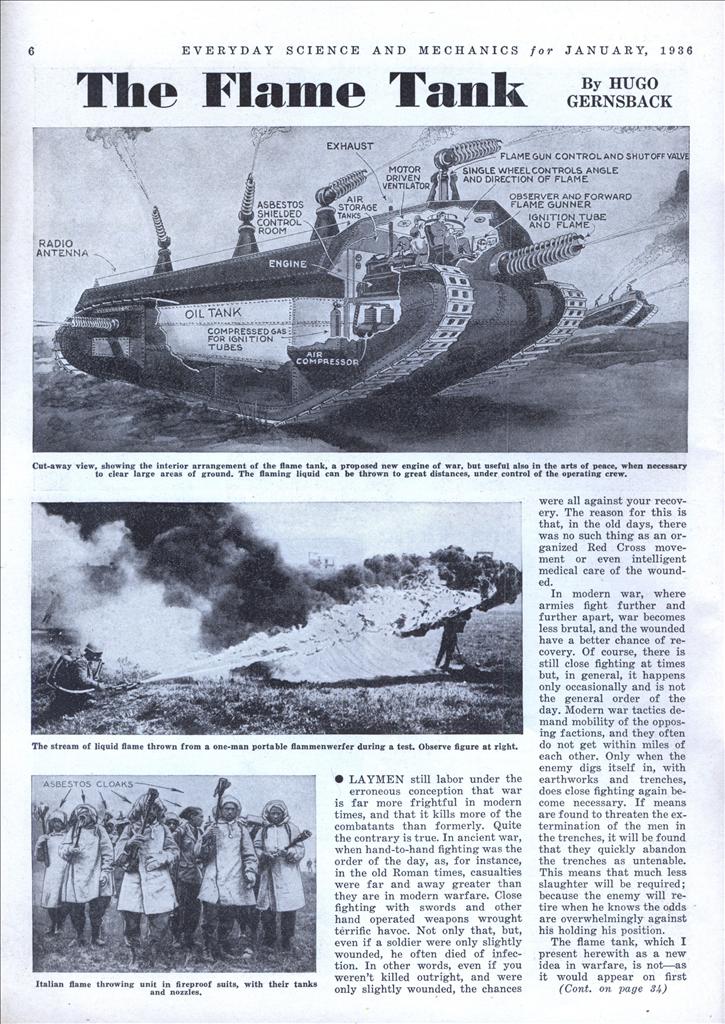 LAYMEN still labor under the erroneous conception that war is far more frightful in modern times, and that it kills more of the combatants than formerly. Quite the contrary is true. In ancient war, when hand-to-hand fighting was the order of the day, as, for instance, in the old Roman times, casualties were far and away greater than they are in modern warfare. Close fighting with swords and other hand operated weapons wrought terrific havoc. Not only that, but, even if a soldier were only slightly wounded, he often died of infection. In other words, even if you weren’t killed outright, and were only slightly wounded, the chances were all against your recovery. The reason for this is that, in the old days, there was no such thing as an organized Red Cross movement or even intelligent medical care of the wounded.

In modern war, where armies fight further and further apart, war becomes less brutal, and the wounded have a better chance of recovery. Of course, there is still close fighting at times but, in general, it happens only occasionally and is not the general order of the day. Modern war tactics demand mobility of the opposing factions, and they often do not get within miles of each other. Only when the enemy digs itself in, with earthworks and trenches, does close fighting again become necessary. If means are found to threaten the extermination of the men in the trenches, it will be found that they quickly abandon the trenches as untenable. This means that much less slaughter will be required; because the enemy will retire when he knows the odds are overwhelmingly against his holding his position.

The flame tank, which I present herewith as a new idea in warfare, is notâ€”as it would appear on first thinkingâ€”a frightful war implement to burn the enemy to a crisp. It is merely the threat of this new weapon which makes it important. The flame tank is the outgrowth of the German flammenwerfers (flame-thrower) which were used in the World War. These flame-throwers were, usually, small portable reservoirs attached to the backs of the soldiers, and containing gasoline or other fuel; by providing pressure in the reservoir, and connecting a hose to it, a flame could be directed about 20 to 30 feet ahead of the soldier. It constituted an excellent threat and would make any soldier at whom it was directed turn tail unless, of course, his comrades shot down the men carrying the flame-throwers.

The flame tank proposed is built as a huge army tank, of almost any dimensions you wish but, instead of carrying cannon or machine guns, the equipment in its interior comprises, first of all, its propelling machinery; second, the usual turrets from which the observing officers peep through slots; third, and occupying most of the available space in the interior, of the tank, we find huge tanks of fuel which may be gasoline, crude oil, or any suitable substance which is to feed the flames. Fourth, air compressing machinery, which keeps the fuel under high pressure, in order to shoot the flames at great speed over a good distance. Fifth, on the top of the tank we have a battery of revolving mounts which, however, carry not guns but nozzles. These nozzle-mounts are so arranged that they can be rotated to send the stream towards any direction while, at the same time, each nozzle can be elevated to any suitable angle. All this is done mechanically from within by the crew.

For close work, such as trench warfare, where the enemy is to be cleaned out of the trenches, the flame tank can do wonders; because no enemy would cherish the idea of having his dugout drenched with burning gasoline, as our cover illustration shows. The flame tank is throwing a number of streams of burning fluid towards the enemy and, under high compression, we probably can get the stream to go 100 yards, and perhaps further.

The flame tank, being well armored, withstands the fire of the enemy and, unless a direct hit is effected by a large shell, it will continue unmolested until it gets astride the enemy’s trenches. The tank is, of course, supported by its own attacking airplanes, which are busy dropping bombs on any artillery that would tend to damage the flame tanks. Following these tanks are a battalion of men, encased in asbestos suits and helmets to protect themselves against the heat and occasional drops of burning liquid which are swerved from the stream by gusts of wind, etc. These soldiers, by the way, are not imaginary, as our photograph shows. Mussolini has been experimenting with flame-throwers carried individually by his soldiers; the illustration shows the asbestos-covered Italians troops graphically.

When the flame tank reaches the trenches, it will find no difficulty in cleaning them out of the enemy, and a dozen tanks of this type will make any line of trenches untenable.

The flame tank, however, would find other uses. Very often the enemy, in outpost fighting, uses isolated houses, which the usual gunfire cannot demolish. The flame tank will burn down such strategical obstacles in short order.

In addition to this, one of the most formidable barriers in any war is the all-important presence of thick woods. Such an area of wooded land becomes often dangerous, because the enemy not only hides in it but places artillery, machine guns and what not to harass the other side. One or two flame tanks could fire such a piece of woods in short order and burn it to the ground, thus doing away with the obstacle.

The flame tank may also find peacetime uses, where roads have to be built through woods or jungles. A few such tanks, by burning down trees and vegetation, will probably be able to clear a path quickly and economically; other tanks following will throw not gasoline but water, under high pressure to keep the fire from spreading when and where it is not wanted. A path can thus be cut quicker through woods, and particularly thick jungle, more easily than by present methods.

I have purposely not mentioned what types of fuel will be used in these flame tanks; this is a matter for future development. Gasoline itself, while efficient, is perhaps not the best to use. In the first place, it is a light-weight fluid and cannot be shot over great distances, because of its low weight. Crude oil, kerosene or, perhaps, a mixture of these with other chemicals of greater density, will no doubt be found more suitable for flame tank uses. Experiments in this direction will probably secure the best answer to the problem.