THE FLIGHT OF ATOMS PHOTOGRAPHED (Oct, 1923) 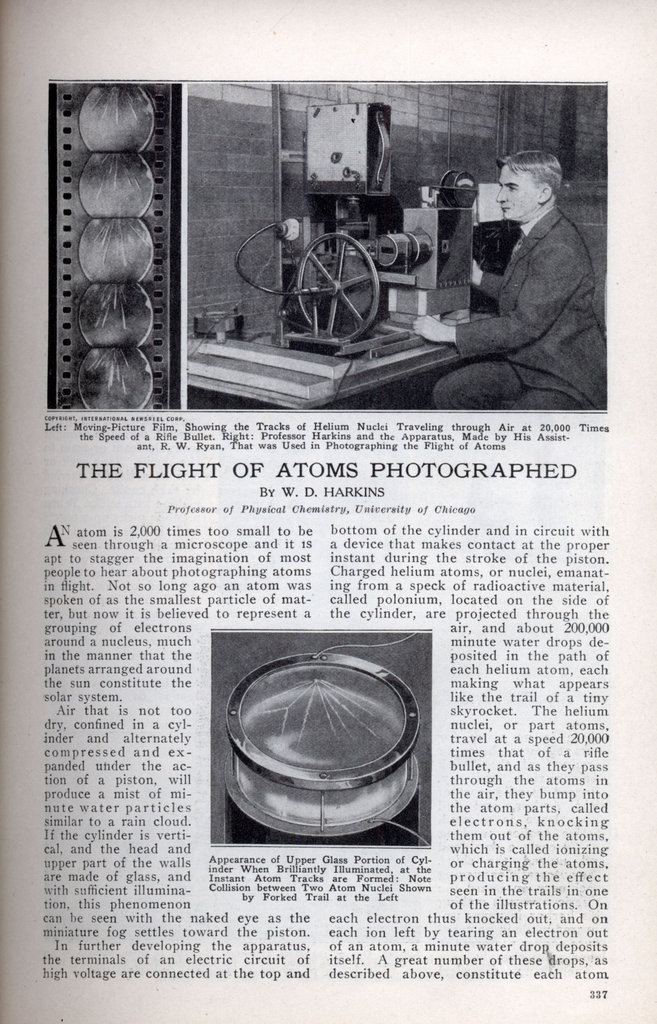 THE FLIGHT OF ATOMS PHOTOGRAPHED

An atom is 2,000 times too small to be seen through a microscope and it is apt to stagger the imagination of most people to hear about photographing atoms in flight. Not so long ago an atom was spoken of as the smallest particle of matter, but now it is believed to represent a grouping of electrons around a nucleus, much in the manner that the planets arranged around the sun constitute the solar system.

Air that is not too dry. confined in a cylinder and alternately compressed and expanded under the action of a piston, will produce a mist of minute water particles similar to a rain cloud. If the cylinder is vertical, and the head and upper part of the walls are made of glass, and with sufficient illumination, this phenomenon can be seen with the naked eye as the miniature fog settles toward the piston.

In further developing the apparatus, the terminals of an electric circuit of high voltage are connected at the top and bottom of the cylinder and in circuit with a device that makes contact at the proper instant during the stroke of the piston. Charged helium atoms, or nuclei, emanating from a speck of radioactive material, called polonium, located on the side of the cylinder, are projected through the air, and about 200,000 minute water drops deposited in the path of each helium atom, each making what appears like the trail of a tiny skyrocket. The helium nuclei, or part atoms, travel at a speed 20,000 times that of a rifle bullet, and as they pass through the atoms in the air, they bump into the atom parts, called electrons, knocking them out of the atoms, which is called ionizing or charging the atoms, producing the effect seen in the trails in one of the illustrations. On each electron thus knocked out, and on each ion left by tearing an electron out of an atom, a minute water drop deposits itself. A great number of these drops, as described above, constitute each atom track, which when illuminated by a powerful arc light, are extremely bright. When one of the helium nuclei collides with the nucleus of another atom, the result is similar to one billiard ball hitting another, but usually it shoots through 400,000 atoms without striking a nucleus.

A motion-picture camera can be mounted directly above the top of the cylinder and arranged to operate in synchronism with the movements of the piston so as to photograph each series of flights as it occurs. It is interesting to note that out of 30,000 tracks photographed, only one indicated a nearly direct collision between a helium nucleus and the nucleus of another atom. By measuring the angles of incidence and deflection shown in such a collision, it is possible to compute the diameter of the atom nucleus involved.