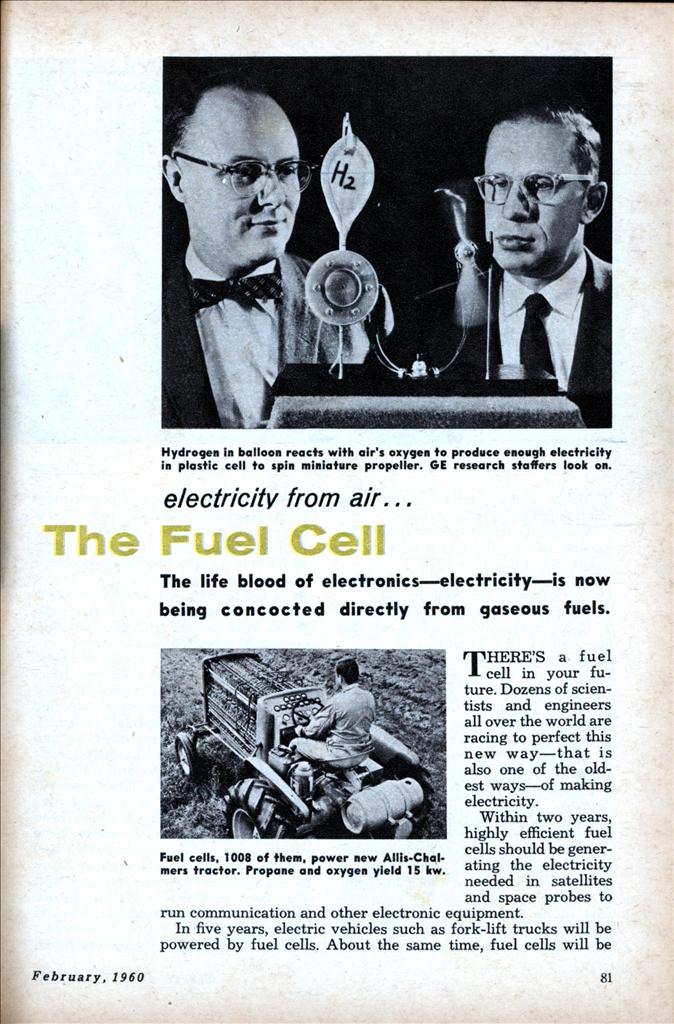 Within two years, highly efficient fuel cells should be generating the electricity needed in satellites and space probes to run communication and other electronic equipment.

In five years, electric vehicles such as fork-lift trucks will be powered by fuel cells. About the same time, fuel cells will be available to power remote ranches and unattended radio relay stations.

Will they be used to power autos? The experts believe there is a very strong possibility of this after 1970.

These predictions are substantiated by the following accomplishments:
• Recently, a British engineer, Francis T. Bacon demonstrated a fuel cell that operated a fork-lift truck.

• The Allis-Chalmers Co. showed an experimental tractor powered by a battery of 1008 small fuel cells. Without so much as a whisper from the power source, the 5270-pound tractor dragged a gang plow through a large field.

• Throughout the entire run of the Brussels World Fair, an American-made fuel cell kept a bank of lights glowing.

Many big corporations and the government are anxiously pushing fuel cell projects because these cells have several great advantages over, other ways of making electricity. Let’s look at them:
• High efficiency: Some fuel cells convert up to 70 percent of the energy pumped into them into electrical energy. This compares with 41 percent efficiency for the newest and largest power plant turbo-generators, and 35 percent for large diesel generator combinations.

• Silence: There are no moving parts.

• No fumes: The only waste products of most fuel cells is water.

• Long life: Some fuel cells have operated continuously for more than a year.

• No heat necessary: Some fuel cells operate at room temperature.

What is a fuel cell? Just mix two gases in a chemical solution called an “electrolyte.” The energy they give off when they combine is immediately converted into electricity at special collection plates. There is no intermediate and wasteful heat stage, so the cell doesn’t heat up of its own accord. The byproduct, usually water, is simply drawn off.

Since the fuel cell is so simple, it’s reasonable to ask why it hasn’t been perfected up till now. Scientists have certainly been plugging away at the fuel cell long enough. Sir Humphrey Davy talked about the fuel cell 150 years ago. Way back in 1839, Sir William Grove built a fuel cell powered by hydrogen and oxygen.

Most of the early researchers found that their cells were quickly contaminated and soon stopped working. Extremely pure gases are needed, and purity means high cost. In addition, the favorite fuel, pure hydrogen, is dangerous to handle.

New knowledge of materials has spurred recent progress in fuel cells. Researchers at Lockheed laboratories in Sunnyvale, Calif., have developed ceramic-like electrodes made out of the rarer “transition metals,” more familiarly known as the “rare earth metals.” National Carbon Company researchers are using carbon for the electrodes and a potassium hydroxide solution for the electrolyte. General Electric scientists have developed a solid, plastic-like electrolyte in place of the liquids that most other researchers use. They claim that this will enable them to pack cells more densely into a given volume. The plasticized material is said to pass electrons between the electrodes in much the same manner as the solid electrolyte in a dry cell.

All this talk of “electrodes” and “electrolytes” brings to mind the familiar dry cell and storage battery. After all, they also convert chemical energy into electricity. What’s the big difference between the fuel cell and conventional batteries?

In the fuel cell the chemical energy is stored outside the cell in gas tanks. The electrodes promote the reaction, but are not eaten up by it. Therefore, they should last indefinitely.

The inventors of the various fuel cells each see their devices in different applications. “Peaking” is the major application for Bacon’s “Hydrox” cell. The cells would help provide that “extra” electricity demanded of central power stations during peak periods. In off hours, the central stations would manufacture hydrogen and oxygen to fuel the cells.

The General Electric fuel cell requires only simple, compact controls and would be suitable for something as small as a portable television set. Since all fuel cells produce direct current, the TV set could be made without a rectifier circuit—just as though it were powered by conventional batteries.

The Allis-Chalmers fuel cell runs on air and propane. Any cell that can use air instead of expensive bottled oxygen has obvious advantages. An English competitor to the Hydrox cell known as the “carbox” cell also runs on air instead of oxygen. The other fuel component can be natural gas, manufactured gas, or vaporized kerosene.

The fuel cell does very well at steady, long-time jobs. Engineers with a leading American oil company have calculated that a 36-horsepower fuel cell could equal the performance of a 300-hp conventional engine in a car weighing as much as an Oldsmobile. DeSoto engineers have already made a model of a car powered by fuel cells. The electricity would feed an electric motor in each wheel. A four-wheel drive like this would offer very smooth acceleration.

Not only would no transmission be required, but the electric motors could be switched to act as generators, feeding the electricity generated by the braking action into a bank of resistors (which could heat the car) ! Electric trains work on the same “dynamic braking” system.

One factor that would affect the rate of commercialization of the fuel cell is its competition. The strongest competition in the “no moving parts” category is thermoelectric generation (see “Thermoelectricity: A Look Into the Future,” Electronics Illustrated, Sept. 1959).

Thermoelectric devices require heat to generate electricity. This means that thermoelectric generators could go into all sorts of waste-heat situations where the fuel cell does not apply.

Fuel cells are much more efficient than thermoelectric generators, running as high as 70 percent conversion of energy compared to a high of 10 percent for thermoelectricity.