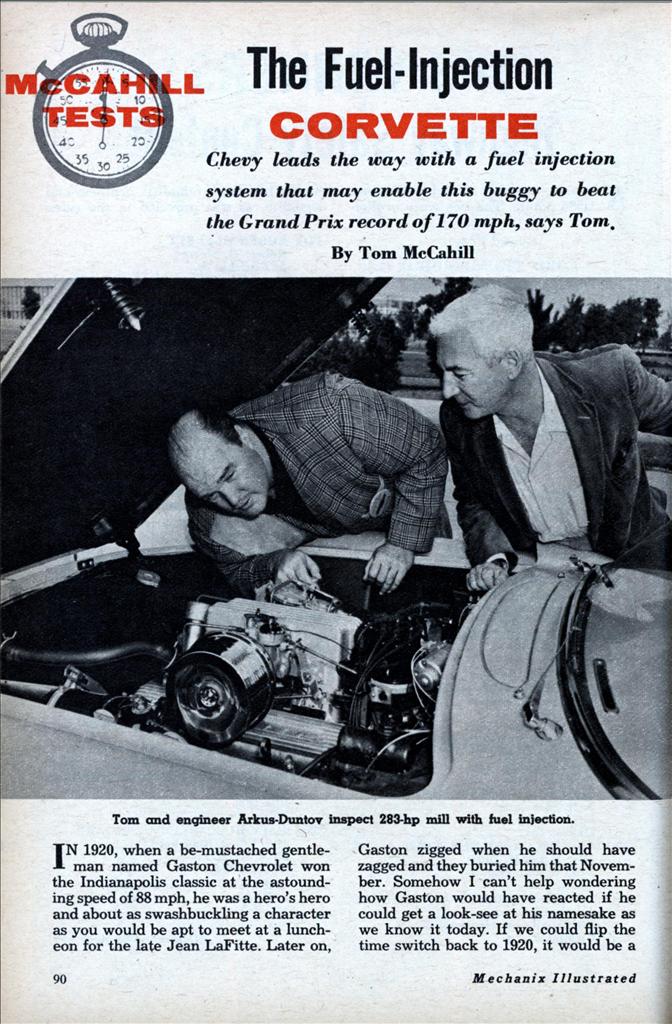 Chevy leads the way with a fuel injection system that may enable this buggy to beat the Grand Prix record of 170 mph, says Tom, By Tom McCahill IN 1920, when a be-mustached gentleman named Gaston Chevrolet won the Indianapolis classic at the astounding speed of 88 mph, he was a hero’s hero and about as swashbuckling a character as you would be apt to meet at a luncheon for the late Jean LaFitte. Later on, Gaston zigged when he should have zagged and they buried him that November. Somehow I can’t help wondering how Gaston would have reacted if he could get a look-see at his namesake as we know it today. If we could flip the time switch back to 1920, it would be a cinch to jam the whole family, including the cat and dog, into a ’57 Chevrolet sedan and outrun old Gaston in his roaring race car. for the entire 500 miles in Indy.

Chevrolet, for many years a dependable but unexciting piece of transportation, a little over two seasons ago donned the guise of a rip-snorting, hell-for-leather performer, a lot more like the guy the little bucket was named after. Ford, for a long time Cock Of The Walk in dig and down-the-pike leadership, suddenly found itself competing with a new Chevy engine that would wind up like a Waring Blendor and leave almost every car ever conceived in Michigan blanketed in dust behind it.

In 1956, Ford, chagrined at Chevrolet’s athletic prowess, came back and smacked hell out of Chevy in some pretty important events such as the Darlington 500, the World Series of stock car racing. But Chevrolet at Daytona Beach earlier in the year had had things pretty much its own way.

As we wrote in our ’56 Chevrolet test, the V8 that powered it was the finest breathing engine made in America and had a cam as sharp as the tooth of a Killarney bat. Due to its light valve assembly it was able to wind up tighter than a Siamese ukulele. When properly tuned it could put out one horsepower per cubic inch. This alone was news because, as you readers know only too well, most horsepower claims by manufacturers resemble the truth about as closely as a giraffe resembles a groundhog. Chevrolet claimed 225 horse but most top stock car race,men knew this was a real understatement. For 1957, the Chevrolet mill claims 250 horsepower for the standard Corvette engine and about 283 when equipped with solid lifters and fuel injection. Displacement has been increased from 265 to 283 cubic inches, still the smallest of the Big Three V8’s.

The Chevrolet Corvette in 1956 astounded more sports car purists with its terrific speed and acceleration than Briggs Cunningham would if he entered Sebring in a rowboat. Before proceeding with this test of the fuel-injection Corvette, I would like to break in with a quick injection for Chevy fans interested in more family-type transportation. We will bring you a detailed report on the ’57 sedans later on. As there were no production models available at testing time, the family sedan I drove was an engineering job. Here, quickly, are the results. With single four-barrel carburetor and new Turboglide transmission (which is similar to Dynaflow), I made the following times: 0-30 mph, 4.2 seconds; 0-50 mph, 8.5 seconds; 0-60 mph, 10.8 seconds; and 0-70 mph, 14.2. Top speed—110 mph-plus. Now back to the Corvette.

Basically, the 1957 Corvette is pretty close to identical with the 1956 and is identical in appearance. When we last brought you a test of this car it was of the 1954 six-cylinder version, a lukewarm open-type car and very comfortable. The latter adjective can no longer be applied to the 1957 Corvette. Due to the addition of a semi-automatic soft-top raising mechanism in ’56 and continued on ’57 models, the cockpit room has been reduced greatly. If Chevy had adopted the adjustable steering wheel feature of its closest competitor, the comfort and safety factors would have shot way up. As it is, the steering column cannot be moved in or out to fit the driver. Tie this up with shallow, small seats and you have a car that is suitable for men on the smallish side only.

The big news at Chevrolet for 1957 is the introduction of fuel injection. Fuel injection will be optional at extra-cost in the Corvette and every other Chevrolet, including the Broom Peddler’s Special.

Fuel injection has become a more or less semi-magic word to the automotive fraternity in the last few years. To the average reader its operation may now be a little confusing due to the many systems of fuel feeding which are called “fuel injection.” The first fuel inject was invented by a gent named Rudolph Diesel who out-Cratered Judge Crater long before Prohibition. From a ship named the Dresden he mysteriously disappeared in the English Channel with all his blueprints and papers in the fall of 1913. As this was just before World War I, there was much speculation as to what happened to Herr Diesel. Anyway, the late Rudy is the guy who invented the diesel engine and fuel injection. Many of you readers associate the term “fuel injection” with diesel power plants. You are right but this isn’t the same system Detroit uses for gasoline engines.

For our two readers in East Lizardtail, Borneo, here briefly is the poop on how a fuel injection diesel engine works. In the four-cycle jobs, air is admitted to the cylinder through a valve in the customary way. This air is compressed on the up, or compression, stroke at any- where from 15 to 17-to-l ratio. In a true diesel no spark plug is needed because all air and matter consists of hundreds of little molecules bouncing around. As the molecules are compressed (or their playground reduced in size) by as much as 16 times, their action is speeded up from a normal 1,000 miles an hour. These molecules, bouncing off the cylinder walls, piston tops and cylinder heads, now do so with such force and velocity that the heat of the air is raised to at least 1,000 degrees.

At this instant, fuel injection is employed. Under about 600-700 pounds pressure and at a velocity greater than the speed of sound, a highly-efficient, high-pressure pump shoots a drop or two of fuel (fuel oil) through a nozzle. This instantly turns into a fog that directly enters the cylinder. The heated air, without any spark from a plug, explodes the oil fog at once— and that’s how a diesel works. In a diesel, the volume of air in the cylinder is always constant—only the amount of fuel injected is changed to increase or decrease speed. As you know, in a gasoline engine with a conventional carburetor, the air is the controlling factor.

However, the automotive fuel injection system developed at General Motors at present is only a distant cousin of the diesel system. This new system, though providing a fantastic advance in performance, does not explore the full and expensive properties of diesel injection, which someday may make it possible to run a 12 or 15-to-1 compression ratio engine cooler and more effectively on a poorer grade of fuel than we have now. But that’s tomorrow. Before we get on with today, let me qualify that last statement. When the fuel is injected at the last instant, as it is in a diesel, or at the top of the compression stroke, all possibility of pre-ignition is eliminated. In today’s so-called fuel injection engines, such as used on the Corvette, high-octane fuel must still be employed. The fuel goes in on the suction stroke and must ride out the compression stroke to the end without bursting into flame first.

The new Chevrolet Corvette employs a fuel injection system that works like this. The speed of the engine is controlled, as usual, by the amount of air admitted. Through a series of fuel pumps (driven directly by a shaft leading to the distributor and controlled by the vacuum in the intake manifold) a jet of fuel is squirted into the intake port for each cylinder. This is picked up and carried into the combustion chamber by a normal swirl of incoming air. In action, this is similar to having eight separate small carburetors, or one for each cylinder. From the second the intake valve closes with its new charge, it acts like any other gasoline engine and the charge is fired in the customary way, by a spark plug.

In a nutshell, here are the advantages of Chevy’s fuel injection. Through this super-type of Carburetion (and Carburetion it is) each cylinder now gets a 100 per cent uniform charge, something almost impossible with standard manifolding. This alone is enough to increase the efficiency of the engine by many percentage points. It eliminates the old-fashioned carburetor throttle pump and, in general, also eliminates the flat spots in performance so common even in the great 1956 Chevrolet engine. With an ever-constant supply of fuel in the right amount at the right spot, better torque will be experienced from idling speeds right on up to wide-open throttle. This is a tremendous advance in fuel handling but I, for one, am wondering about getting such a gadget serviced in the badlands of B^ack Bearskin, Dakota, during a howling blizzard.

During my tests I was accompanied by Zora Arkus-Duntov, now with the Chevrolet engineering staff, whom I’ve known for many years since he ran at Indianapolis and raced at Le Mans. Duntov is the boy who drove a Corvette better than 150 mph at Daytona Beach last winter and is one of the guiding fathers on this new fuel injection system. Duntov will be well-remembered by hot rodders as the designer-builder of the old flathead Ford Ardun heads which made wildcats out of many a 1949 Ford kitty on the hot rod circuit.

Our test car was not the full-race Corvette with solid valve-lifters and competition cam which will be seen on our race circuits in ’57. The job I tested was the standard Corvette with fuel injection that was more of a general use car. Here’s what this “general use” car can do: Zero to 60 mph, 6.2 seconds; 0-80 mph, 11.0; 0-100,17 seconds. Top speed—close to 140 mph. This was a gearshift model. With the automatic transmission, all performance figures fall off about ten per cent. In its full competition suit, Duntov assured me that if Daytona Beach is smooth and the wind calm, he expects to “easily” better the record now held by the D-Jag at 164 mph. He may even give the Grand Prix record of over 170 mph a wrestle. If the beach is flat and the wind is calm, I for one think he might.

In summing up, this is a great American high-performance car, the greatest ever made. Its main drawback is that the cockpit is now much too small for football players. •