There’s a good reason the Hugo awards are given for writing Science Fiction and not Romance. 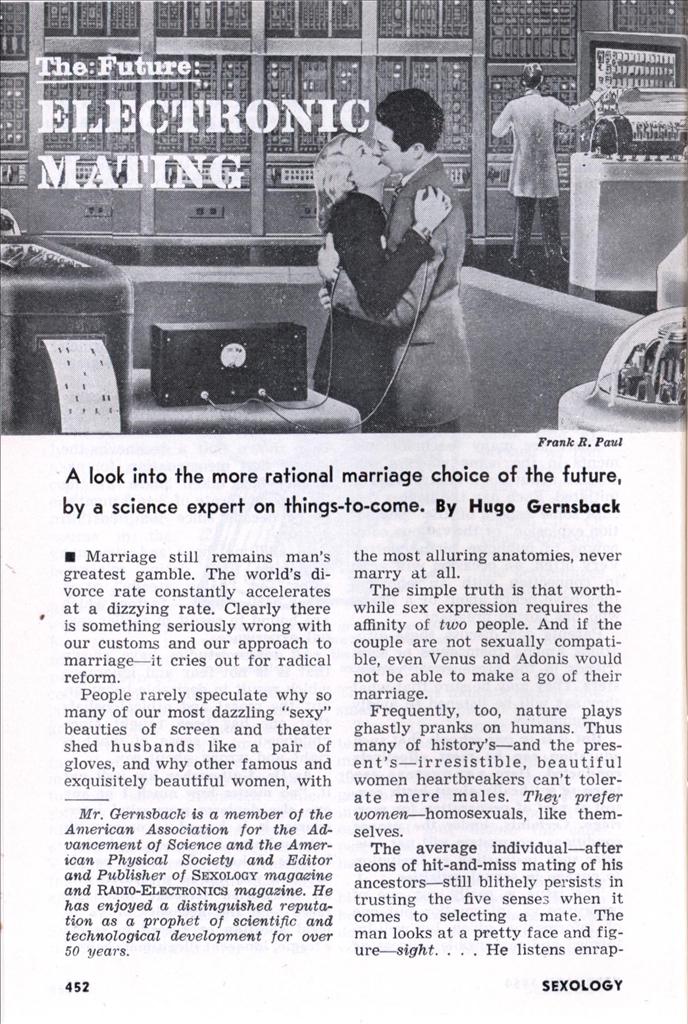 A look into the more rational marriage choice of the future, by a science expert on things-to-come.

Marriage still remains man’s greatest gamble. The world’s divorce rate constantly accelerates at a dizzying rate. Clearly there is something seriously wrong with our customs and our approach to marriage—it cries out for radical reform.

People rarely speculate why so many of our most dazzling “sexy” beauties of screen and theater shed husbands like a pair of gloves, and why other famous and exquisitely beautiful women, with the most alluring anatomies, never marry at all.

The simple truth is that worthwhile sex expression requires the affinity of two people. And if the couple are not sexually compatible, even Venus and Adonis would not be able to make a go of their marriage.

Frequently, too, nature plays ghastly pranks on humans. Thus many of history’s—and the present’s—irresistible, beautiful women heartbreakers can’t tolerate mere males. They prefer women—homosexuals, like themselves.

The average individual—after aeons of hit-and-miss mating of his ancestors—still blithely persists in trusting the five senses when it comes to selecting a mate. The man looks at a pretty face and figure—sight. . . . He listens enrapturedly to her voice — sound. He feels her cheek — touch. … He inhales the fragrance of her skin or hair—scent. … He kisses her lips —taste . . . and promptly loses his head. The woman reacts similarly —and so they get married, with a better than 80% chance that it won’t really work out happily.

There was a time—just a few decades ago—when people married without regard to health, particularly venereal disease. There was a terrific public hubbub when some states first enacted blood (Wassermann) tests, against syphilis, before issuing a marriage license. Today such a test is taken for granted.

But marriage itself still remains a stupid gamble—the planet’s most outrageously costly and totally unnecessary lottery. Yet, we progress —exceedingly slowly it is true—but we do inch ahead.

In all seriousness I propose an entirely new approach to solve the problem. I hasten to add that my plan—if adopted—will not eliminate all mismating, nor all divorce, but I sincerely believe that it will cut down a large proportion of unhappy marriages.

There will be 2 stages to this plan. The first, to extend over a number of years, will concern itself mainly in accumulating a vast quantity of research material. Once this has been accomplished, we can then approach the second stage, that is, putting the plan into work.

Let us begin with stage 1. A group of bright, young research scientists – psychologists should be organized under the tutelage of a brilliant, able leader.

The group of researchers will interview 25,000 or more married couples. They will be armed with lengthy questionnaires as well as special test equipment. After a few years they will have ascertained which of the 25,000 marriages were successful and which were not. Like the original coded and self-proving Kinsey questionnaire, by eliminating any possible false answers, these marriage questionnaires will be as perfect as modern science and ingenuity can make them.

In due time—mind you, this is a long-term project—our scientists will have much vital scientific data and a long set of questions which all marriage candidates must answer routinely before a license can be issued to them.

When the research fact-finding period has been concluded, stage 1 of the plan has ended. We now reach stage 2: putting the plan into actual operation. This, of course will require the full cooperation of the states and cities throughout the land. But I do not foresee much difficulty here, when so much is at stake, and where the resulting benefits to the country are so great.

When stage 2 begins to function, young people will also have to be tested for their S.Q.—the Sexual Quotient. This test will become as important as our present blood tests. No marriage certificates will be issued without an S.Q. test.

In cases of total incompatibility, there is a chance of alleviation, either medically or psychiatrically (frigidity and other sexual disturbances).

How do we obtain a person’s S.Q.? First, there must be a complete medical examination of the subject, which everybody of marriageable age should have, if much subsequent grief is to be avoided. This examination will quickly reveal obvious physical sexological defects or disturbances, many of which can be remedied.

After the physical tests, the sexual tests are evaluated. Let me debunk here the age-old lie that sex is wholly physical. Nothing is further from the truth. Not even the most libidinous human couple can perform during fright or under other highly unpleasant conditions. This is because we have a sexual center at the top of the brain. The sexual impulses travel from this center via the spinal nerves to the genitals. Cut, or impair, this sexual communication line—either physically or psychically—and sex performance is drastically curtailed or eliminated.

Hence the psychic sexual tests are most important. Fortunately, we have today a number of excellent laboratory instruments which give us outstanding indices for such tests. Better instrumentation is being developed continuously.

The future tests will proceed somewhat as follows: The subject, male or female—it makes no difference which—is physically connected to a number of instruments, such as the following: Electrocardiograph, which furnishes a most accurate tape record of the heart action, reliably portraying emotional stresses. The Electropsychometer (electronic lie detector), which also gives us a most reliable tape record of psychical highlights while the test proceeds. The Electroencephalograph, which gives a running curve of the brain function during the test.

To this is added a recording Polygraph, which gives other valuable clues and accurate indices of sexual emotion through the pulse action, rapidity of breathing, etc.

(These if instruments are illustrated in the drawing on the preceding page.) Now the person under test is given to read a specially prepared romantic short story. This is followed by a short motion-picture film made up from various well-known film productions, with the accent on “torrid” love scenes by famous film personalities.

Next we have a number of short sexological – educational, informative items printed on special cards. This particular part of the test gives the laboratory people a good insight into the person’s sex knowledge.

There follows a final, lengthy Kinsey-type sex questionnaire into the intimate life of the individual with the double and triple checking technique. Such questions, if not answered truthfully, will trip up the subject when the question is put in another form later on.

The final computation of the subject’s S.Q. is made by automatic machines, chiefly through the means of electronic calculators —the so-called electronic brain— and punched index cards. The rating is automatically printed on each card in percentages.

When the final S.Q. has been noted on the card, it becomes a comparatively routine matter for the psychologist in charge to “match” the male and female cards of the marriage applicants.

The answer will not be simply “compatible” or “noncompatible” but the machine rather will answer in percentages. Thus the electronic brain may say: 90 per cent. Translated, this means that the marriage will be in all likelihood, 90 per cent satisfactory. The next two candidates may rate only 73 per cent, and so forth.

The State Marriage Authority may refuse to issue a marriage license to applicants who rate 50 per cent or less. That means that such candidates should find themselves more suitable partners.

This may all sound unnecessarily complicated and lengthy, but it is not. It is far better that young people spend a few hours answering questions and undergoing a few tests than spend the greater portion of a lifetime in unhappy marriage.

—————————-
Mr. Gernsback is a member of the American Association for the Advancement of Science and the American Physical Society and Editor and Publisher of Sexology magazine and Radio-Electronics magazine. He has enjoyed a distinguished reputation as a prophet of scientific and technological development for over 50 years.