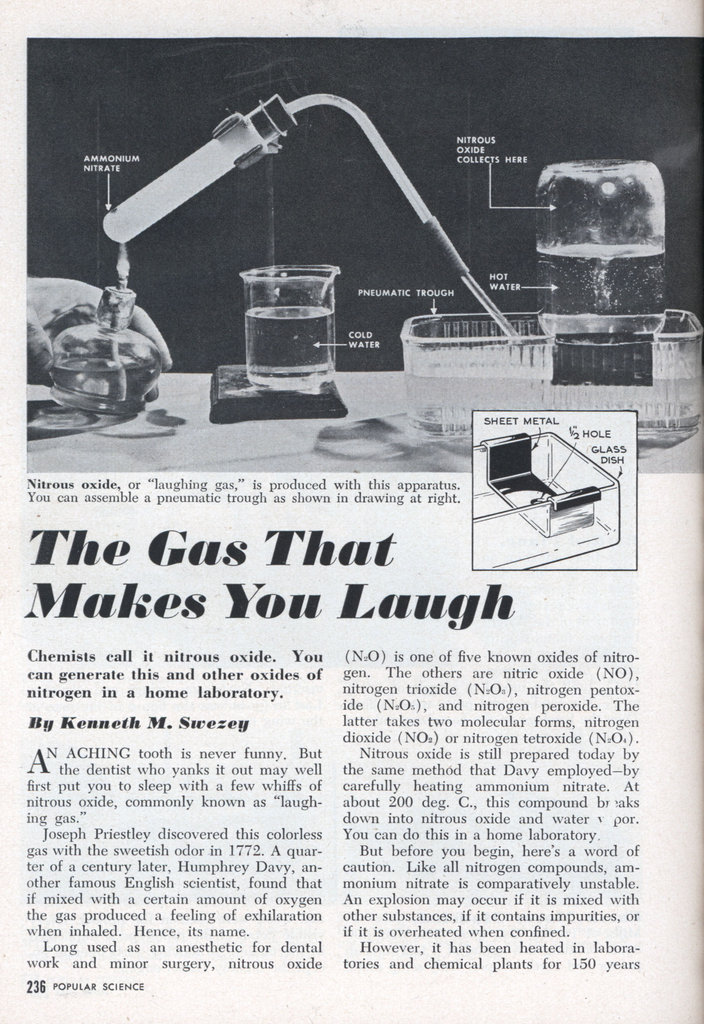 Joseph Priestley discovered this colorless gas with the sweetish odor in 1772. A quarter of a century later, Humphrey Davy, another famous English scientist, found that if mixed with a certain amount of oxygen the gas produced a feeling of exhilaration when inhaled. Hence, its name. Long used as an anesthetic for dental work and minor surgery, nitrous oxide (N2O2) is one of five known oxides of nitrogen. The others are nitric oxide (NO), nitrogen trioxide (N2O3), nitrogen pentox-ide (N2O5), and nitrogen peroxide. The latter takes two molecular forms, nitrogen dioxide (NO2) or nitrogen tetroxide (N2O4).

Nitrous oxide is still prepared today by the same method that Davy employedâ€”by carefully heating ammonium nitrate. At about 200 deg. C, this compound breaks down into nitrous oxide and water v por. You can do this in a home laboratory.


But before you begin, here’s a word of caution. Like all nitrogen compounds, ammonium nitrate is comparatively unstable. An explosion may occur if it is mixed with other substances, if it contains impurities, or if it is overheated when confined. However, it has been heated in laboratories and chemical plants for 150 years without accident save through carelessness. If you follow the rules, as all chemists should teach themselves to do, you will have no trouble.

Begin by putting about 10 grams of chemically pure ammonium nitrate into a large test tube fitted with a one-hole stopper through which passes a bent delivery tube. Clamp the test tube to a ring stand at a 45-deg. angle. Connect the delivery tube to another bent glass tube leading into a pneumatic trough.

Pour water into the trough to a level just above the shelf. Also fill the collecting bottle to the brim with water, cover its mouth temporarily with a piece of cardboard, and invert it on the shelf. Since nitrous oxide is fairly soluble in cold water, use water as hot as possible in the trough and bottle.

Place a large beaker of cold water near your apparatus. The end of the test tube may be immersed in this if the reaction should become too rapid.

When you’re all set, begin production of the gas by gently heating the ammonium nitrate with an alcohol lamp or with the flame of a Bunsen burner turned low. Keep the lamp or burner in your hand and move the flame constantly to distribute the heat. Give all your attention to the job.

At first the nitrate melts slowly. Further heating causes it to break down into a mixture of nitrous oxide and waterâ€”a white vapor. The reaction itself produces heat. So apply the flame at this point just enough to keep the reaction going. The speed can be determined by observing the bubbles of gas entering the jar. Don’t let them exceed one or two a second.

When the jar is full of gas, remove the heat from the test tube, and immediately disconnect the delivery tube to prevent water from being drawn into the test tube as it cools. Then slide a sheet of cardboard or glass under the mouth of the jar and stand it upright for your tests.

(As a final safety precaution, don’t try to decompose the last gram or so of ammonium nitrate in the test tube. This small amount may easily become overheated.)

When nitrous oxide itself is heated strongly, it decomposes in turn, forming nitrogen and oxygen and giving off con-, siderable heat. The oxygen in nitrous oxide is more concentrated than it is in normal air. Hence, many substances that already are burning will burn as brightly in this gas as they do in pure oxygen. As a demonstration, try the steel-wool experiment shown on page 237.

Most stable of the oxides of nitrogen is nitric oxide, another colorless gas. It contains twice as much oxygen as nitrous oxide, but it holds onto its oxygen more tenaciously. Burning sulphur thrust into a bottle of it will immediately be extinguished. ” Nitric oxide can be made with the setup shown on the preceding page. When you pour in the dilute nitric acid (1 part acid to 2 parts water), nitric oxide will be liberated. At the same time, the flask will fill with a reddish-brown vapor. This is nitrogen peroxide, produced by the reaction of some Of the nitric oxide with oxygen from the air. This colored gas will dissolve in the water in the trough, and the collecting bottle will fill with colorless nitric oxide.

Temperature affects the relative amounts of the two gases in the mixture. Below 20 deg. C, each molecule of NCX unites with another one, forming N2O1. As the temperature rises, the big molecules begin splitting in half. At 154 deg. C, all have become NO2.

Nitrogen tetroxide is colorless; nitrogen dioxide is brown. You can show the trans-formation by filling two test tubes with nitrogen peroxide. Heat one and the gas in it will darken as more NO2 forms.

Nitrogen peroxide is very poisonous. So make it in a well-ventilated room.

The most important reaction of nitrogen peroxide is with water. The gas dissolves readily in water, reacting with it to form both nitric and nitrous acids. In warm water, the nitrous acid decomposes, leaving nitric acid.

At the beginning of this century, great quantities of nitric acid, and subsequently nitrogen compounds for fertilizers and other uses, were made from nitrogen oxides obtained by passing ordinary air through the heat of an electric arc. The heat of the arc caused some of the nitrogen and oxygen of the air to unite, forming nitric oxide. Cooled and passed through more air, this united further with oxygen, giving nitrogen dioxide. This, in turn, was dissolved in water to form nitric acid.

You can duplicate the process on a small scale with the apparatus shown at the top of this page. Bend the lower ends of the stiff iron wires so they form a spark gap with about ‘2″ between the points. Hang a moist strip of blue litmus paper over one.

Connect the two wires to the high-voltage terminals of the spark coil. Let the spark jump the gap continuously for several minutes. The spark produces nitrogen dioxide. This in turn reacts with the moisture in the litmus paper. The litmus turns pink, indicating nitric acid has formed.