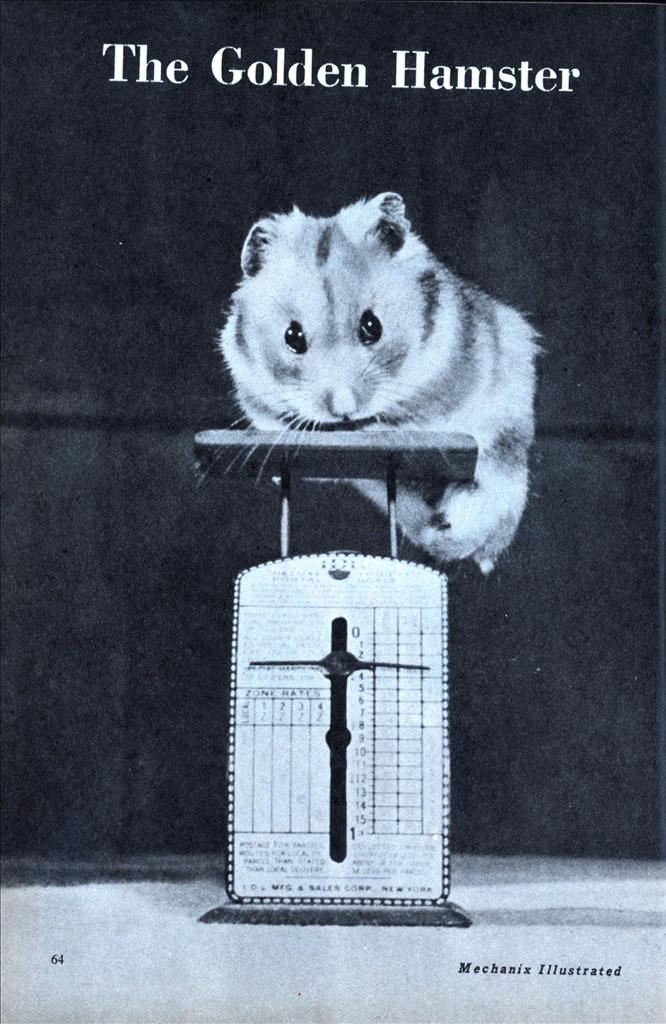 These little rodent breed four times as fast us guinea pigs, can contract more human diseases than any other animal. No wonder scientists are excited
— BY WILFRED WEISS

A DOCTOR in Fort Worth, Texas, is having a feud with his nurse over a pair of Golden Hamsters he bought for laboratory experiments. She argues that the friendly little beasts are too cute, and won’t give them up for any lab work. But the doctor is fascinated by the unique laboratory value of the creatures and insists that they be sacrificed for science.

The Hamster is an appealing little animal with a pink nose and black eyes that bulge out like Eddie Cantor’s. Its fine silky pelt is unusually loose and pliant and ranges in color from golden tan in the summer to mahogany red in the winter. When fully grown, the Hamster is about 5 or 6 inches long and weighs up to 4 ounces.

Hamsters are so sensitive to human diseases that when you have a cold you don’t dare handle them because they’ll become infected immediately. In fact, they are even sensitive to the human breath and will draw back if you exhale near them. On the other hand, there is no disease peculiar to Hamsters, and there is no known case of anyone catching a disease from them.

Not only are they susceptible to human ills, but they contract these diseases faster, and in severer doses. Army doctors learned this during the war. By infecting Hamsters with bacteria our armed forces might be expected to encounter in various parts of the world, the doctors were able to study the results and devise preventive methods and cures that saved thousands of lives.

A spectacular peacetime medical use of the Hamster is in laboratory exploration of that dread but little known disease, leprosy. Another use is a new test for pregnancy. By using 3 female Hamsters, a doctor can conduct a simple test in his office and determine pregnancy within 2 hours. He can also use them to test for tuberculosis and get results in 10 to 12 days. The dentist as well as the doctor finds the Hamster valuable in laboratory research. The effect of a diet deficiency, for instance, will show up in Hamsters’ teeth in a few days.

Despite this animal’s great aid to science, man still knows very little about its origin or background. The first pair apparently were brought to the United States in 1938, probably smuggled through Palestine from Syria, thought to be their native habitat. Some breeders say that all of them now in this country have descended from that original pair, but returning GIs may have brought in others since then. In any case, the first known record of Golden Hamsters dates from 1930, when a Hebrew zoologist dug up a litter near the Syrian city of Aleppo.

One of the earliest breeders of Hamsters in this country is E. B. Gunter of Fort Worth, a former saxophonist in name bands, who maintains that herein lies our best hope of cracking the mystery of cancer.

Ever since Gunter got his original pair from pioneer stock, he has be ?n running a one-man campaign to tell doctors and scientists about their remarkable value in medical research. He discovered, for example, that none of the few doctors who had worked out a speedy way to test pregnancy with the animal had bothered to publish the information. He kept after the doctors until one gave up and supplied the data. Now part of his crusade is to pass on this information to every other doctor and laboratory technician.

As Gunter has found, the Hamster will eat and thrive on anything but fats, citrus fruits, onions and garlic.

While it eats only once a day, it will never refuse food, however. If you offer it food after it has had its daily meal, it will still gobble everything in sight, storing it in pouches that open into its mouth and extend halfway back along both shoulders. Then in its nest it empties these pouches by placing its fore feet behind its shoulders and pushing out the food, still as dry as when it went in, through its mouth.

Unable to defend itself against other animals, in its natural state the Hamster burrows into the ground and steals out only at night to hunt food. In captivity it still prefers to sleep during the day. At nightfall when allowed out of its pen, it crawls with a slinking motion, its stomach dragging the ground like an underslung dachshund.

After making the little animal the prey of practically everything else on earth, nature balanced its timidity with a friendliness rarely matched by other creatures. If you sit still, the Hamster will crawl up your arm and down into your lap. Then, if it decides it is among friends, it will snuggle into your pocket. Adult Hamsters have a strong grip in their toes and have an amusing trick of clinging by one fore or hind foot to your fingers.

Hamsters are easy to breed and raise. Gunter, who has a full-time job as office manager in a box-manufacturing plant, finds a half hour each day is sufficient for the 10 or 12 females and the 2 males he keeps on hand.

They are very neat housekeepers and adapt themselves easily to varying climatic conditions. Because they also have no odor, pets kept in the house are never offensive. The pens should be cleaned once a week and disinfected once a month. Other than that, the main consideration in breeding is to avoid noise. Evidently they haven’t become used to the change from the desert silence, and a sudden noise throws them into a frenzy of fear. A frightened mother of a new litter will grab the babies in her mouth and hide them in her pouch. If she is not reassured immediately, the baby Hamsters will suffocate.

For the beginner in Hamster raising, Gunter recommends controlled breeding with a single male and a single female, two to four months old, in the same pen. This is better than the open breeding of several males to a group of females in the same cage. It lets you observe the animal’s habits and gives you a chance to keep more exact breeding records.

When the female decides to breed with a male, she will stand rigidly still. If she doesn’t do so 5 minutes after she has been placed in the male’s pen, you will know that she is not going to accept the male, and the trial should be repeated once a day until the female accepts. Then they should be left together as long as they show interest in each other, usually about 15 minutes.

Hamsters reproduce in 16 days, as compared with 60 days for guinea pigs, and 30 days for rabbits, which are the 2 most commonly used laboratory animals today. With the average litter running 5 to 11, and the average female capable of bearing 6 litters in a life span of 2Vi years, quantity is no problem. According to Gunter’s estimate, they cost only about 50 cents a litter to raise.

The exact cost of a trio of breeding Hamsters, Gunter says, is still something to be established. Hamster raising is so new that their market value changes rapidly.

The market for Hamsters is already broad but still developing. Gunter has found that word of their pet-appeal quickly spreads around the community. The size of your pet market naturally will depend upon where you live and how much word-of-mouth and other advertising you do. The average price for Hamsters as pets—usually the males—is about $2 to $3.

One of the best ways to investigate a commercial market for Hamsters is to query your family physician about laboratories in your community. You can also get in touch directly with research laboratories, colleges, agriculture schools, and high-school biology teachers. Again there is no established price, but Gunter has found that it ranges from $12 to $25 a dozen for 7- to 12-week-old stock.

Another market for Hamsters lies in brokers or dealers, who buy from breeders and resell to laboratories. This spring they are paying about 50 to 75 cents per animal. You furnish the shipping crate and pay the freight. Gunter advises that it costs no more to ship 50 young Hamsters than it does 10. To make a reasonable profit it is wise to be prepared to ship a larger number of similar age.

In spite of their rapid breeding rate, they are never likely to crowd you out of your home. Separated, they can’t breed. Aside from that, with their popularity as pets, with the average college or agricultural school laboratory able to use from 100 to 400 a week, and with the experimental and diagnostic uses of the Hamster rapidly growing, it will take even this fast-familying little fellow a long time to over-produce himself. This is a relatively new field. Your Hamstery should prove profitable.