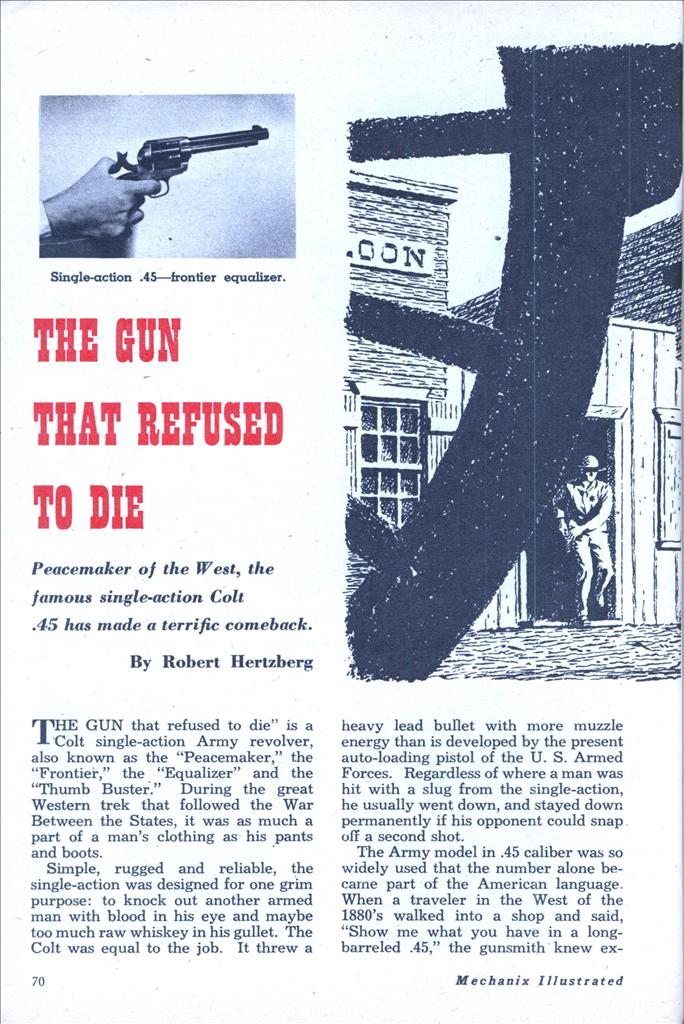 THE GUN THAT REFUSED TO DIE

Peacemaker of the West, the famous single-action Colt .45 has made a terrific comeback.

THE GUN that refused to die” is a Colt single-action Army revolver, also known as the “Peacemaker,” the “Frontier,” the “Equalizer” and the “Thumb Buster.” During the great Western trek that followed the War Between the States, it was as much a part of a man’s clothing as his pants and boots.

Simple, rugged and reliable, the single-action was designed for one grim purpose: to knock out another armed man with blood in his eye and maybe too much raw whiskey in his gullet. The Colt was equal to the job. It threw a heavy lead bullet with more muzzle energy than is developed by the present auto-loading pistol of the U. S. Armed Forces. Regardless of where a man was hit with a slug from the single-action, he usually went down, and stayed down permanently if his opponent could snap off a second shot.

The Army model in .45 caliber was so widely used that the number alone became part of the American language. When a traveler in the West of the 1880’s walked into a shop and said, “Show me what you have in a long-barreled .45,” the gunsmith knew ex- actly what he meant. However, the revolver was also chambered for many other calibers, particularly the .44-40 cartridge made for the Winchester repeating rifle, also put on the market in 1873.

The single-action is beautifully balanced, has a rounded grip that seems molded to the hand, and is the best “pointing” handgun ever made. It was ideal for its era, when a man’s life often depended on how quickly he could answer the challenge, “Reach for your gun!”

However, story-book exaggerations and the incredible marksmanship of movie cowboys notwithstanding, the single-action revolver was very difficult to shoot rapidly. It was normally carried with the hammer on its first or “safety” notch, or resting full down on an empty chamber. When a man drew, he had to yank the hammer all the way back to full cock, usually with his thumb, and only then could he pull the trigger.

The terrific blast of the heavy powder charge rocked the gun in the hand, causing the barrel to rise and the grip to sink. To fire a second time, he had to readjust the gun in his grasp and recock the hammer; just pulling the trigger with the hammer down did nothing whatsoever. The thumbing operation was awkward, took a lot of practice, and was hard on the thumb; hence the nickname “Thumb Buster” for the single-action.

Gun-slingers of reputation were irked by the inherent slowness of the Army revolver and developed a rapid-fire technique called “fanning.” When one of these experts got his right hand on his gun, he put pressure on the trigger and kept it on. As the barrel whipped out of the holster to shooting level, he slapped the hammer back hard with the lower palm of his left hand. With the trigger already released, the hammer did not stay at full cock, but immediately snapped forward to fire the first cartridge.

Still keeping the trigger squeezed tight, the shooter would continue to “fan” his left hand at the hammer, getting off five or six shots in as little as two seconds. Of course, this was unaimed hip-shooting, and not very accurate because the gun was being shaken vigorously, but accurate enough when the target was a big man only a few yards away.

Between 1873 and 1941 Colt made 357,350 single-actions, which found their way into all parts of the world. The original selling price of a standard model was $12. De luxe jobs with fancy engraving, very popular with the unshaven riders of the range, were all of – $16 or so. Even in 1941, when production ceased, a new .45 sold for only $30. Colt finally dropped the single-action in that year when the entrance of the United States into World War II seemed imminent. Factory executives probably figured GIs trained to shoot bazookas would have little further interest in a gun used by their grandpappies against Indians, so they buried the noisy relic of the past. At least they thought they did!

Even during this “modern” war, the legend of the single-action was kept alive by the flamboyant Lt. General George S. Patton, who wore a spectacular pair of pearl-handled “Peacemakers” everywhere he went.

After the war Peacemakers that had rested undisturbed for decades suddenly became valuable. Rusted hulks with cylinders that wouldn’t even turn brought $50.

Interest and sales potentialities built up to such a degree that the Colt company, somewhat to its own surprise, finally announced last year that it would resume production on the single-action. It is now available, in .45 and .38 Special calibers and in 5-1/2- and 7-1/2-inch barrel lengths. Identical in every detail with the gun that won the West, this revolver will retail for $125. The chambering in the original .45 caliber is a concession to sentiment and to those shooters who like their guns loud and pungent. The .38 Special will probably be fired a great deal more, as this is the standard police and target caliber and is widely reloaded by economy-minded shooters. The serial numbers of the Model 1873/1955 single-actions started at 360,001, and gun nuts fought for first runs. Colt’s problem is now placating dealers and turning out the guns fast enough.

Colt, although the originator of the frontier six-shooter, was the last of several firearms makers to evaluate properly the postwar interest in its famous product. The commercial ball was actually started rolling by William B. Ruger, a 39-year-old gun genius who is president of Sturm, Ruger & Company, Southport, Conn. In 1949 this firm introduced a new .22 caliber target pistol of Ruger’s own design. In a field in which there have been no improvements in 40 years, this gun was an immediate hit, and almost overnight Ruger became an important figure in shooting circles.