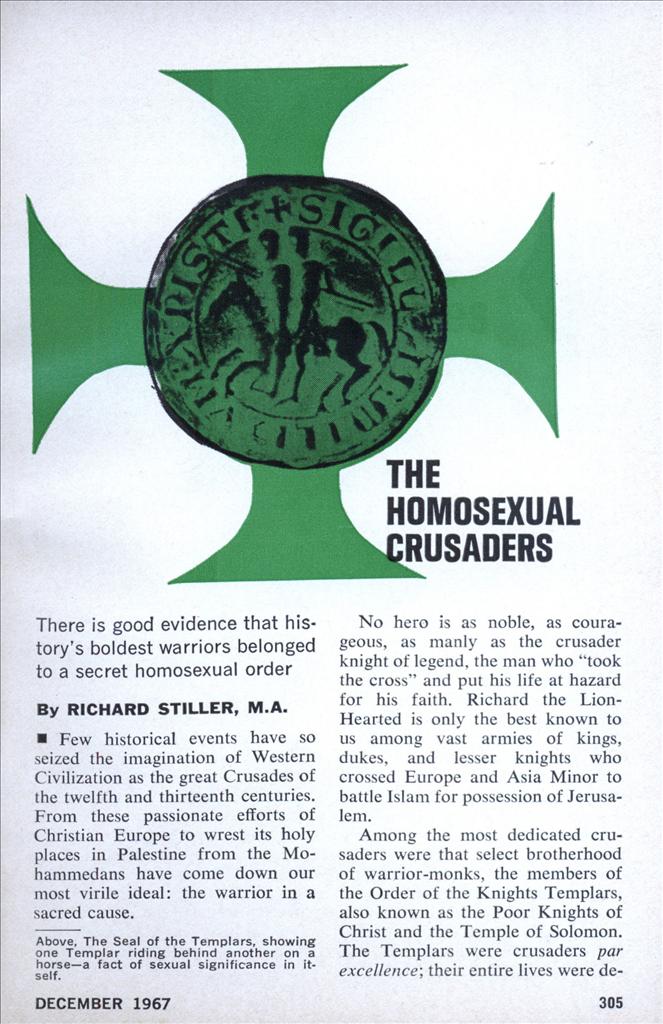 No hero is as noble, as courageous, as manly as the crusader knight of legend, the man who “took the cross” and put his life at hazard for his faith. Richard the Lion-Hearted is only the best known to us among vast armies of kings, dukes, and lesser knights who crossed Europe and Asia Minor to battle Islam for possession of Jerusalem.

Among the most dedicated crusaders were that select brotherhood of warrior-monks, the members of the Order of the Knights Templars, also known as the Poor Knights of Christ and the Temple of Solomon. The Templars were crusaders par excellence; their entire lives were de- voted to the battle to win and keep Jerusalem safe for Christian pilgrims. On entering the order, they vowed a life of chastity, poverty, and total obedience to their Grand Master; the Grand Master took orders only from the Pope.

The Templars were the very paragons of the manly, knightly virtues: they were also, many of them, homosexuals. Their initiation ceremony included not only religious and feudal rituals but homosexual rituals, as well. The Order of the Knights Templars was, in fact, a homosexual warrior elite.

This is one thesis developed with impressive scholarship by G. Legman in his unusual and provocative book The Guilt of the Templars, published recently by Basic Books. Legman, a noted bibliographer and a well-known editor of books and essays on sexual themes, describes the three basic charges that were leveled against the Templars when they were arrested and suppressed on Friday, the thirteenth of October, 1307.

They were charged with renouncing Christ and Christianity, worshiping a cat or an idol, and “that at their initiation they were required to kiss the Templar receiving them on the anus (or backbone), on the penis (or navel), and on the mouth, and that they were then told that they might have carnal copulation with one another and were to submit to it passively if required by another Templar.”

Legman believes the Templars guilty of the major accusations cited above, although he does not consider that these were the real reasons for the arrest and downfall of the order. In his view the Templars, in their almost two centuries of existence (they were founded in Jerusalem in 1118), came under the influence of anti-Christian heresies and of surviving pre-Christian cults, and that this was part of their sexual outlook.

An expression of anti-sexual bias is seen in Templar regulations which forbade the knights to attend weddings, even the weddings of their own sisters. Said one Templar in his testimony before the Inquisition describing his initiation ceremony: “Then he (the knight performing the ceremony) commanded me never to enter a church when a marriage was being celebrated … he commanded me never to enter a house where there was a woman in childbirth”

Following the initiation and the homosexual ritual kiss, the novice knight was then told that if at that time “any animal heat moved him” or if he felt any “stirring of the flesh” he could have sexual relations with any of the brother Templars present. At the same time, he was to be ready to submit to the other Templars should they desire him. According to this, the initiation could be interpreted not so much as a homosexual seduction as a homosexual rape of the intimidated recruit into the order.

Some defenders of the Templars (notable among those who defended their innocence was the great nineteenth century American historian Henry Charles Lea) claimed that the kisses were symbolic acts meant only to demonstrate complete submission to the rules of the order. Others said that it was a falsehood intended to damage them in the public eye.

Legman insists that the formal expression of the “homosexual availability” of all the Templars to each other goes far beyond casual homosexual acts that might occur in almost any circumstance when men are segregated from women.

“In what was clearly the most ritualistic and also the most homosexual form,” he writes, “it was the receptor into the order who kissed the recruit, not the opposite. In other cases, apparently the receptor kissed the recruit first, who was then required to kiss him in return, in the reverse order: mouth, navel (i.e., penis), anus; and anus, penis, mouth. This is clearly the progression of an act of love, as would be even more obvious in the case of opposite sexes.”

Not all the Templars were enthusiastic homosexuals. Take, for example, the story of Hugues de Marchant who at the age of forty was inducted into the Templars. At his initiation, he was confined with other Templars for a long period of time, during which time he was believed to have been subjected to homosexual rape. When he was released, now a full-fledged Templar, he was pale and very much changed. Shortly thereafter, he changed his family seal to read “The Seal of Hugues the Lost.”

The Templars’ homosexuality has been attributed not only to the strong Moslem influence under which the Templars fell during their long years in the Middle East as the principal Christian army during the crusades. Almost all of their activities took place in what are now the countries of Israel, Syria, Turkey, Lebanon, and Jordan. Homosexual ordeals and general homosexuality, it is well known, have long been common in the Arab world.

There is some virtue in remembering the Templars and what their story tells us about the complexities not only of homosexuality but also about all of human sexuality. Apparently the manly vigor and rough soldierly masculinity of the Knights Templars are not incompatible with homosexuality.

And apparently, also, homosexuality is not necessarily native to a particular time or place or profession. From pastoral Sodom in the Bible down through the medieval crusader knights to the modern homosexual communities in our great cities today, homosexuality endures. It remains a puzzling and important and perhaps permanent facet of human behavior.

*Above, The Seal of the Templars, showing one Templar riding behind another on a horse—a fact of sexual significance in itself.