National Geographic
Issue: Apr, 1939
Posted in: Advertisements, Automotive
1 Comment on The Hounds of Spring Are At Your Heels (Apr, 1939)

This is the best line I’ve ever seen in an ad:
Yes, a Nash is as catching as measles, and twice as hard to quarantine. Get into the driver’s seat once, and you can never get yourself out of it.
Isn’t there a class in advertising school where they teach you not to compare your product to a disease? 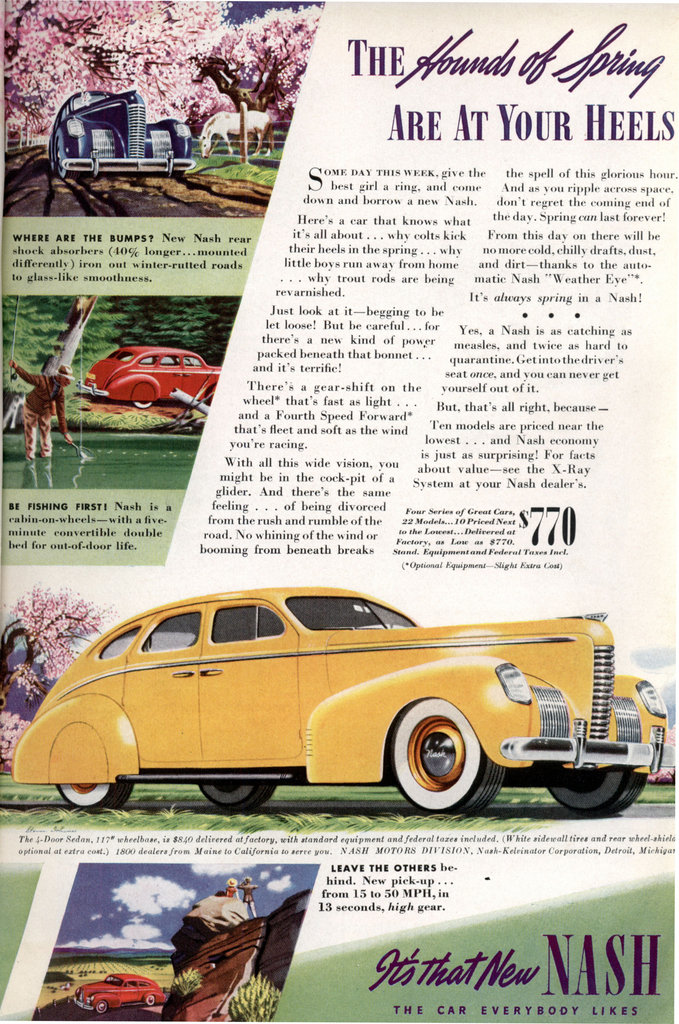 The Hounds of Spring Are At Your Heels

SOME DAY THIS WEEK, give the best girl a ring, and come down and borrow a new Nash.

Here’s a car that knows what it’s all about . . . why colts kick their heels in the spring … why little boys run away from home . . . why trout rods are being revarnished.

Just look at itâ€” begging to be let loose! But be careful… for there’s a new kind of power packed beneath that bonnet. . . and it’s terrific!

There’s a gear-shift on the wheel* that’s fast as light . . . and a Fourth Speed Forward* that’s fleet and soft as the wind you’re racing.

With all this wide vision, you might be in the cock-pit of a glider. And there’s the same feeling … of being divorced from the rush and rumble of the road. No whining of the wind or booming from beneath breaks the spell of this glorious hour. And as you ripple across space don’t regret the coming end of the day. Spring can last forever! From this day on there will be no more cold, chilly drafts, dust, and dirtâ€”thanks to the automatic Nash “Weather Eye”

It’s always spring in a Nash!

Yes, a Nash is as catching as measles, and twice as hard to quarantine. Get into the driver’s seat once, and you can never get yourself out of it.

But. that’s all right, because â€” Ten models are priced near the lowest . . . and Nash economy is just as surprising! For facts about valueâ€”see the X-Ray System at your Nash dealer’s.

It’s that new Nash
The car everybody likes