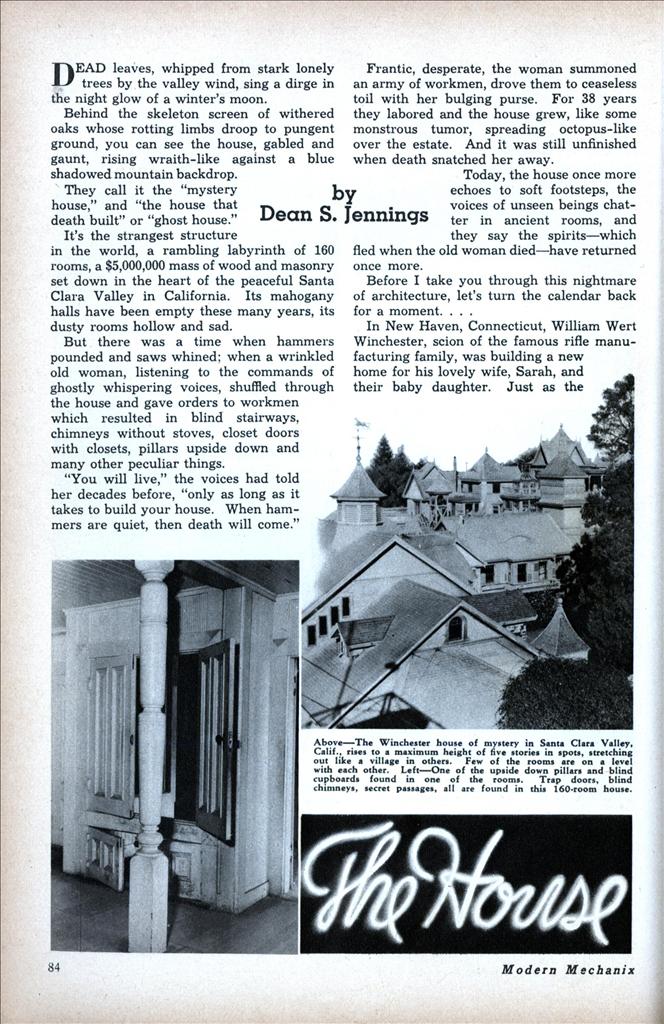 The House That Death Built

DEAD leaves, whipped from stark lonely trees by the valley wind, sing a dirge in the night glow of a winter’s moon.

Behind the skeleton screen of withered oaks whose rotting limbs droop to pungent ground, you can see the house, gabled and gaunt, rising wraith-like against a blue shadowed mountain backdrop.

They call it the “mystery house,” and “the house that death built” or “ghost house.”

It’s the strangest structure in the world, a rambling labyrinth of 160 rooms, a $5,000,000 mass of wood and masonry set down in the heart of the peaceful Santa Clara Valley in California. Its mahogany halls have been empty these many years, its dusty rooms hollow and sad.

But there was a time when hammers pounded and saws whined; when a wrinkled old woman, listening to the commands of ghostly whispering voices, shuffled through the house and gave orders to workmen which resulted in blind stairways, chimneys without stoves, closet doors with closets, pillars upside down and many other peculiar things.

“You will live,” the voices had told her decades before, “only as long as it takes to build your house. When hammers are quiet, then death will come.”

Frantic, desperate, the woman summoned an army of workmen, drove them to ceaseless toil with her bulging purse. For 38 years they labored and the house grew, like some monstrous tumor, spreading octopus-like over the estate. And it was still unfinished when death snatched her away.

Today, the house once more echoes to soft footsteps, the voices of unseen beings chatter in ancient rooms, and they say the spirits—which fled when the old woman died—have returned once more.

Before I take you through this nightmare of architecture, let’s turn the calendar back for a moment. . . .

In New Haven, Connecticut, William Wert Winchester, scion of the famous rifle manufacturing family, was building a new home for his lovely wife, Sarah, and their baby daughter. Just as the house was finished, the sinister shadow over the family made its first appearance. Winchester and the baby girl died suddenly and Mrs. Winchester, stunned by the tragedy, fell into a coma so serious that physicians despaired of her life.

Finally she recovered and, at a friend’s suggestion, visited a medium. During a seance, according to those familiar with her story, she received a communication from her dead husband in which he said: “Sarah dear, if our house had not been finished, I would still be with you. I urge you now to build a home, but never let it be finished, for then you will live. . . .”

Fearful of electric storms so common in the East, the young widow hurried to California, bought 160 acres of land and an eight-room house. There, hiding herself from the world, she began the incredible task which led to the creation of what is now known as “The Winchester Mystery House.”

Mrs. Winchester’s income was $1,000 a day. Most of it was spent on salaries to workmen, on carloads of building materials from every corner of the world, rare woods, exquisite marble, costly glass, fixtures— many of which were never used and still repose in storage rooms. Beautiful floors were inlaid one week, ripped out the next. There were many servants, but only one ever came in contact with the eccentric widow. In fact, when the late Theodore Roosevelt visited California, officials in San Jose called on Mrs. Winchester.

“The President of the United States is anxious to meet you and visit your home,” they said excitedly.

The woman, peering through the front door of her mansion, shook her head.

“I have never bothered anyone,” she said acidly, “I expect no one to bother me. Good day!”

Ignoring the pleas of the officials, Mrs. Winchester walked slowly back to her “blue” room, the tiny bare chamber where, in the dark hours of the night, she communed with invisible friends.

Sarah Winchester, cloistered in supreme loneliness, died on September 5, 1922. The builders gathered up their tools, the great rambling structure gathered dust and age. But she left an astonishing heritage which, in summary form, looks like this: 160 rooms.

Thousands of windows and doors.

Transparent floors, screens on inside doors, doorknobs and fixtures of gold, silver and bronze.

One has the macabre realization that these rooms were made for spirit guests; that no human being was ever destined to sleep in the bedrooms of dazzling beauty, or^sit down in any of the vast reception rooms, whose walls are covered with embossed wall paper studded with bits of crystal.

Sarah Winchester had a weakness for the number thirteen. All the stairways are constructed in series of 13 steps, walls have 13 panels, glass doors have 13 pieces, chandeliers have 13 lights. On one chandelier, having no room for a thirteenth light, Mrs. Winchester punched a hole in the gold conduit pipe and fastened therein a plain iron gas jet.

You can find dozens of closet doors that open on blank walls, stairways that end in mid-air, trap doors, blind chimneys, secret passages, screens placed on blank walls, doors with knobs on only one side. The house was so arranged that carriages or automobiles could be driven inside, with no prying eyes able to watch the silent widow step out.

The mansion is indeed a remarkable feat of the builders’ art. For, although few of the rooms are on a level with one another, the structure stands solidly, rising to a maximum height of five stories in spots, stretching out like a village in others.

Sarah Winchester’s burning zeal to “keep building” is reflected everywhere, particularly in one stairway, with 44 steps 2 inches high and seven turns in a total rise of only ten feet.

If you were taken to the center of the house and left there alone, it might easily take a day to find the way out.

Today, with Sarah Winchester but a memory, with the age-browned halls and rooms deserted shells of once busy hours, strange phenomena have aroused the countryside to a furore of gossip. The spirits, which must have followed the old woman to her marble tomb in New Haven, are once more flitting through the labyrinth . . .

Weird rappings filter down from above to the caretaker’s room on the ground floor. Footsteps, soft, gentle, come and go through the night in padding cadence. Sibilant whispers, they say, swirl around your ears . . .

A woman who went through the house recently, said in hushed awe: “Someone—some unseen guide—was at my side as I walked into Mrs. Winchester’s room. Another time, I felt a gentle pressure on my arm. Superstitious? Not a bit. But I can’t understand it. I could feel this invisible thing in every room.”

Many other recent visitors have reported similar puzzling experiences, paralleling familiar psychic demonstrations in other parts of the world.

The late Harry Houdini, prince of magicians, went through the mansion in the dead of night some years ago but gave out no public impression of his visit. He had planned, however, to return and spend a week within its mystic walls.

What does it mean—the unearthly tramp-tramp of unseen feet, the eerie cry of voices from shadowy, cobwebbed eaves?

The dead leaves fall, the lonely trees bend to the wind, the blue mountain gazes down sphinxlike on the house where Sarah Winchester looked alone at her soul . . .