Popular Mechanics
Issue: Jun, 1935
Posted in: Architecture
12 Comments on The HOUSE that RUNS ITSELF (Jun, 1935) 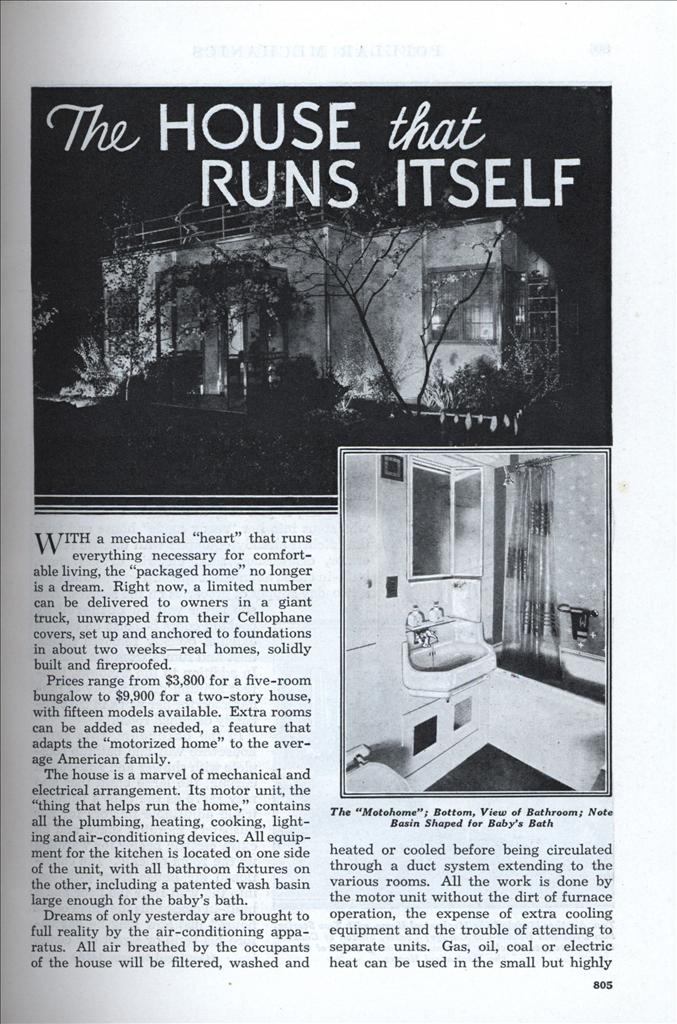 The HOUSE that RUNS ITSELF

WITH a mechanical “heart” that runs everything necessary for comfortable living, the “packaged home” no longer is a dream. Right now, a limited number can be delivered to owners in a giant truck, unwrapped from their Cellophane covers, set up and anchored to foundations in about two weeks—real homes, solidly built and fireproofed.

Prices range from $3,800 for a five-room bungalow to $9,900 for a two-story house, with fifteen models available. Extra rooms can be added as needed, a feature that adapts the “motorized home” to the average American family.

The house is a marvel of mechanical and electrical arrangement. Its motor unit, the “thing that helps run the home,” contains all the plumbing, heating, cooking, lighting and air-conditioning devices. All equipment for the kitchen is located on one side of the unit, with all bathroom fixtures on the other, including a patented wash basin large enough for the baby’s bath.

Dreams of only yesterday are brought to full reality by the air-conditioning apparatus. All air breathed by the occupants of the house will be filtered, washed and heated or cooled before being circulated through a duct system extending to the various rooms. All the work is done by the motor unit without the dirt of furnace operation, the expense of extra cooling equipment and the trouble of attending to separate units. Gas, oil, coal or electric heat can be used in the small but highly efficient heating plant, thus enabling the home owner to choose the fuel best suited to his needs and to the contents of his purse.

Imagine, if you can, the delight of the woman who steps into her “ready made” house and finds the kitchen already equipped with electric refrigerator, dishwasher, sink, electric or gas stove, built-in clock, abundant cupboard space—and even a two-day supply of groceries on the shelves. And she never will be bothered by cooking odors because an electric exhaust quickly removes smoke, dust and fumes from the kitchen. In addition to the windows, indirect lighting gives plenty of illumination for her work in the compactly designed room.

In the bathroom, this same housewife will find bathtub complete with shower and anti-splash curtain, the large basin that also may serve as the baby’s bathtub, triple adjustable mirrors for her husband’s morning shave and an extra electric heater for warming up the room quickly. The conditioned air issues from grills set into the wall near the floor and a built-in clock tells the “man of the house” just how long he has before his train or street car comes along. The packaged home is prefabricated, having a steel frame and walls of asbestos-cement, a material that looks like stucco. That means that it is fireproof, termite-proof, practically earthquake and hurricane proof and protected against lightning. Scientific insulation not only assures the owner of getting his money’s worth out of his fuel, but it combines with acoustical ceiling materials to give the extra advantage of soundproofing. The house is built on a cement foundation with three feet of air space below the first floor. Since the motor unit does all the work, a basement is unnecessary.

Set into the corners of the rooms are steel windows operated by a crank, like those of an automobile. The location of the windows, which are the casement type, permits full use of wall space for attractive arrangement of furnishings. The walls have washable coverings, available in a wide range of designs. Doors also are cut in the room corners for the same reason that the windows are so placed. Since there is no need for opening the windows, due to the air-conditioning system, curtains and draperies will remain clean for much longer periods than now is possible. Lighting is accomplished with thoroughly modern electrical units.

Furnishing the home is entirely up to the owner. He can spend much or little, but the expense can be kept low. A New York department store exhibiting one of the mechanical homes filled its five rooms with furniture, draperies, rugs, wall decorations, in fact, everything to make it comfortable, at a cost of less than $1,200. The furnishings were designed especially for the house, modern, attractive, but inexpensive.

A special crew that delivers the ready-made home by truck to the purchaser’s lot in any part of the country also supervises its erection, assuring that it will be put together properly.

The house brings to the low and middle income group conveniences not now found even in many millionaires’ homes.