My favorite quote: “The British jet plane, Gloucester, played an important part in turning back the robot attack on London.”
Damn those robots! 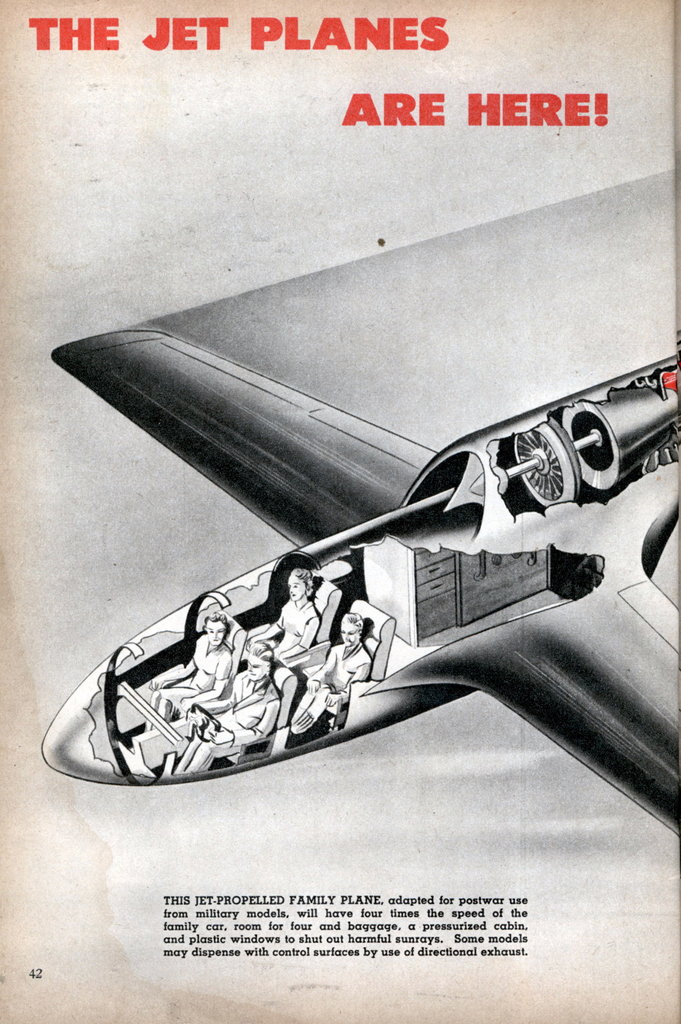 THE JET PLANES ARE HERE!

THE thrilling story of how the jet-propelled plane was developed in this country in almost complete secrecy was revealed recently. The beginnings go back to 1941.

In the fall of that year, the employees of the Statler Hotel in Boston were puzzled by the behavior of a mysterious English guest named Whitely. He ate his meals in his room, had a private telephone installed which did not go through the hotel switchboard, and asked that all his errands be handled by one bellboy. After a week, he left the hotel.

The Statler employees will learn now for the first time that the man’s real name is Frank Whittle, that he is a flight commander in the RAF, and that he is the inventor of the jet-propelled plane. His mission, during his three-and-a-half months’ visit to this country, was to assist American engineers in the design and production of the first jet plane built in the United States. Less than half a dozen people knew his real identity or his purpose in being here.

Whittle moved from the Statler to the home of R. G. Standerwick, supercharger engineer connected with General Electric, who was assigned to the job of working on the jet plane. Even Mrs. Standerwick did not learn until this year who her visitor was.

Plans and parts of the British jet plane, and three English workers, were brought to this country in the same secrecy, and installed in an old building which was kept under heavy and constant guard. Only about a hundred people out of G.E.’s 190,000 employees knew what went on there.

The result of all these precautions was that hundreds of jet planes developed and produced by combined Anglo-American efforts, successfully took part in the repulse of the German robot bombs over London this summer. These planes were British Gloucesters. The first American jet plane is the P-59A Airacomet, which has not yet seen combat, but which has proved itself in test flights to be very fast and to have a high ceiling.

The Gloucester was said to be superior to a German version that has been engaged by the Allies’ fighters on several occasions. The pilots report that the German fighter had poor maneuverability but a high speed and rate of climb, and Supreme Headquarters warns that more extensive and effective use of the German type jet plane is to be expected. Jet propulsion is more efficient than internal combustion only when used at speeds approaching that of sound. Flying at 100 miles per hour for 400 miles, a jet engine will use 70 gallons of fuel to a gasoline engine’s 16 gallons; but at 600 miles per hour over the same distance, the jet engine will burn 770 gallons, the gas engine, 850.