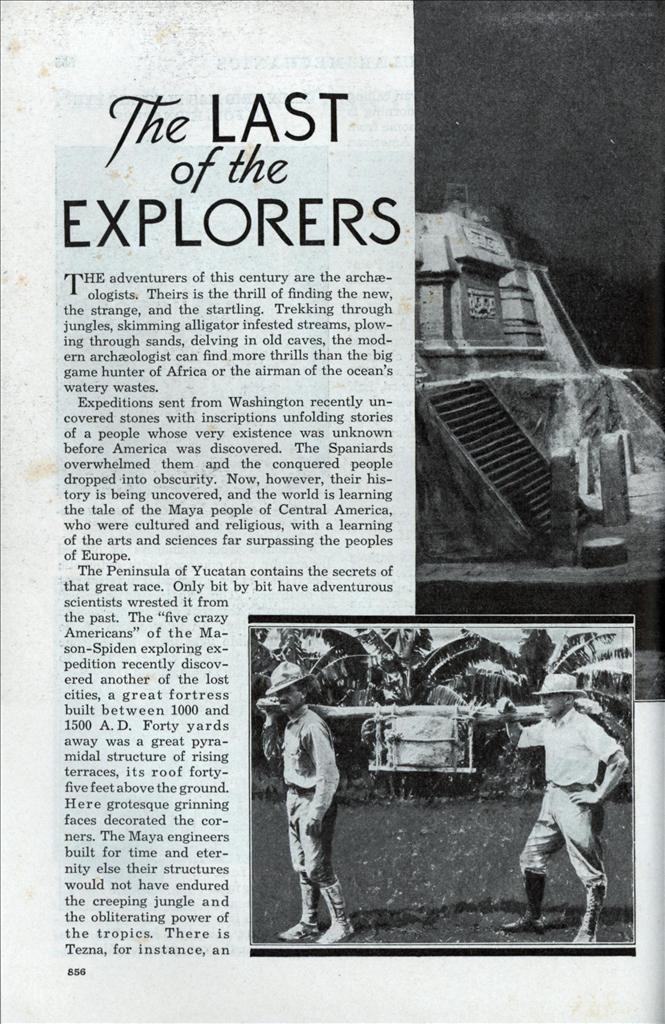 The Last of the Explorers

THE adventurers of this century are the archaeologists. Theirs is the thrill of finding the new, the strange, and the startling. Trekking through jungles, skimming alligator infested streams, plowing through sands, delving in old caves, the modern archaeologist can find more thrills than the big game hunter of Africa or the airman of the ocean’s watery wastes.

Expeditions sent from Washington recently uncovered stones with inscriptions unfolding stories of a people whose very existence was unknown before America was discovered. The Spaniards overwhelmed them and the conquered people dropped into obscurity. Now, however, their history is being uncovered, and the world is learning the tale of the Maya people of Central America, who were cultured and religious, with a learning of the arts and sciences far surpassing the peoples of Europe.

The Peninsula of Yucatan contains the secrets of that great race. Only bit by bit have adventurous scientists wrested it from the past. The “five crazy Americans” of the Mason-Spiden exploring expedition recently discovered another of the lost cities, a great fortress built between 1000 and 1500 A. D. Forty yards away was a great pyramidal structure of rising terraces, its roof forty-five feet above the ground. Here grotesque grinning faces decorated the corners. The Maya engineers built for time and eternity else their structures would not have endured the creeping jungle and the obliterating power of the tropics. There is Tezna, for instance, an important outlying city of the old Maya empire. It is a great acropolis more than five hundred feet on a side, having on its summit five impressive temples surrounding an immense sunken court.

Several score large and small cities and towns have been located in the jungles of Yucatan showing that the old empire was mighty and powerful, with arts and crafts as superior as those of ancient Egypt. It is in these cities that scientists hope to find a key that will unlock the story of the rise and fall of a great nation.

The whole of Yucatan seems filled with these lost cities. Some are unimportant. Others are yielding priceless treasures in jewels and art, and still others are yet to be explored. That the Maya people were intelligent and cultured there is now no doubt. The Spaniards who suddenly swooped down upon them were children in comparison. Maya rulers offered the Spaniards cotton shirts and, later, jewels. Cotton was one of the great gifts of the Maya nation to the world. At that time it was unappreciated. The jewels only were desired. It was largely because Europe had turned mechanical that the Spaniards were able to win the bloody battles provoked by their destruction of the border cities. Scientists now believe that the Maya people had no metal tools nor even so simple a mechanical contrivance as the wheel. They had no beasts of burden, and the great limestone blocks of the giant temples were cut with stone tools and put in place by man power alone.

The Maya nation had nothing so deadly in battle as the guns of the Europeans, but it was years later before Europeans began to realize that the already crumbling civilization, given its death blow by the soldiers of Spain, had possessed great cultural achievements that put them to shame.

The Maya nation had two systems of numerical notation which were not greatly different, except simpler, than our Roman numerals and our Arabic numerals. Discovering these facts it is possible to read the dates on their monuments and in their temples; thus we know their age. Digging in some ruins, Yucatan scientists found fragments of a tobacco pipe, which, when fitted together, formed a complete and beautiful specimen. Sir Walter Raleigh is credited with the introduction of tobacco into the civilized world, but the Maya people had used it for centuries along with pipes.

The mystery of the origin of this highly civilized race, who built pyramids and temples comparable to the greatest in Egypt, is one of the most baffling science has ever tried to solve. Sometime between 1000 B. C. and 200 B. C, their dates show that they reached Central America.

They were certainly an agricultural people. Indian corn was their chief food even as wheat is today in America. Pottery making was early in their national life along with the polishing and cutting of precious stones. The cultural arts grew at a time that Europe was a barbarous people. When Christ was teaching in Palestine the stone temples and monuments were raised. Already the calendar had been developed along with mathematics.

During the next three centuries the Maya people grew in might, building many cities. These were artistically constructed and laid out, with plazas, courts, reflecting pools, temples, palaces, roads, walks—all in a region that is now an almost trackless jungle explored only by scientific adventurers and the seekers after chicle.

Now, two great secrets are being sought —where the Maya people came from and what caused their downfall. Already this latter is partially known. Evidences are being found that indicate periods of depression and suffering. Overgrown cities could not be supported by the Maya farmers—the high cost of living defeated a people whose attainments are the marvel of archaeology.