Modern Mechanix
Issue: May, 1930
Posted in: Aviation
Tags: Lindbergh
No Comments on The LINDBERGHS Learn to GLIDE (May, 1930) 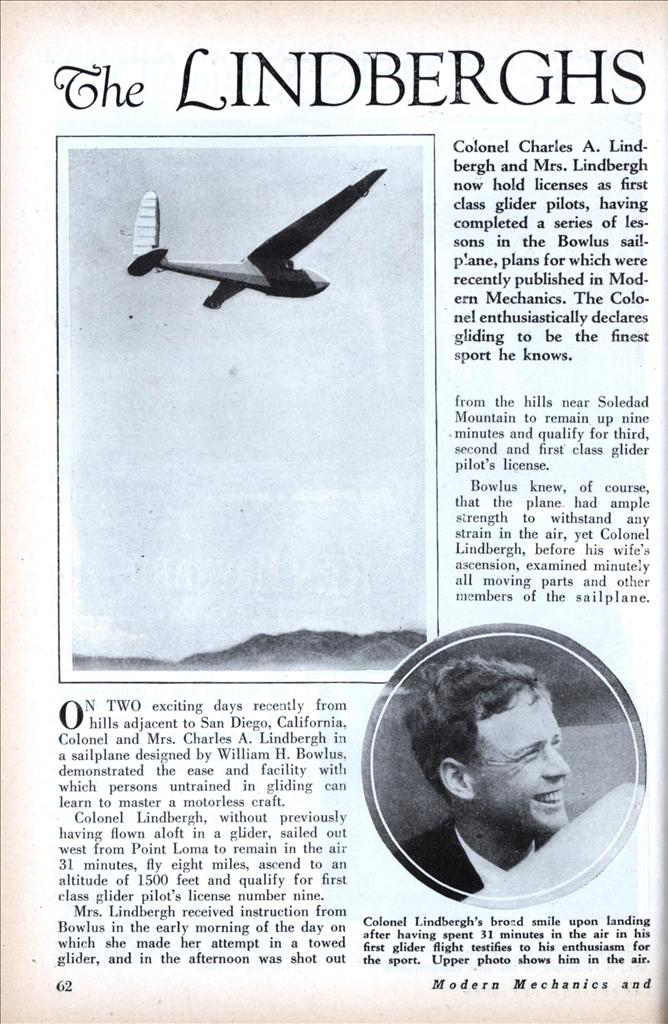 The LINDBERGHS Learn to GLIDE

Colonel Charles A. Lindbergh and Mrs. Lindbergh now hold licenses as first class glider pilots, having completed a series of lessons in the Bowlus sailplane, plans for which were recently published in Modern Mechanics. The Colonel enthusiastically declares gliding to be the finest sport he knows.

ON TWO exciting days recently from hills adjacent to San Diego, California, Colonel and Mrs. Charles A. Lindbergh in a sailplane designed by William H. Bowlus. demonstrated the ease and facility with which persons untrained in gliding can learn to master a motorless craft.

Colonel Lindbergh, without previously having flown aloft in a glider, sailed out west from Point Loma to remain in the air 31 minutes, fly eight miles, ascend to an altitude of 1500 feet and qualify for first class glider pilot’s license number nine.

Mrs. Lindbergh received instruction from Bowlus in the early morning of the day on which she made her attempt in a towed glider, and in the afternoon was shot out from the hills near Soledad Mountain to remain up nine minutes and qualify for third, second and first class glider pilot’s license.

Bowlus knew, of course, that the plane had ample strength to withstand any strain in the air, yet Colonel Lindbergh, before his wife’s ascension, examined minutely all moving parts and other members of the sailplane.

Rowlus realized that the famous couple were exposed to no danger, even though they had not been aloft previously in a sailplane, and it was a thrilling sight to see them launched into the air for their first experience of the kind.

Bowlus gave both of them instructions before the two flights. Before Colonel Lindbergh attempted to fly, Bowlus was shot out from the cliffs of Point Loma for a 15-minute demonstration. When he came to earth Colonel Lindbergh took his place at the controls, and after settling himself comfortably in the tiny cockpit, his head under the leading edge of the wing, he gave the signal to the shock cord ‘crew. Immediately they started running down the slope and as the shock cord stretched out, the plane moved rapidly in the air.

A wind blowing 12 miles an hour from the ocean made the day excellent for gliding. Just before Colonel Lindbergh took off, Bowlus instructed him in the few tricks it was necessary for him to know to take advantage of updrafts and the conditions around the point. Bowlus instructed him to permit the plane to fly itself off the ground, never to dive the glider, to turn in up drafts in order to gain altitude while turning, and to remain fairly close to shore in order that he might land in case the wind ceased blowing.

When Colonel Lindbergh descended 31 minutes after taking off he declared it was the greatest sport of which he had ever known. He was thrilled with the idea that he had carried on a two way conversation between plane and ground. This was possible, of course, because the sailplane has no engine blowing a blast of noise into the pilot’s ears.

In preparing for her flight, Mrs. Lindbergh appeared at Lindbergh Field before sun-up one morning and was given 12 rides in a training glider towed behind an automobile. The training glider consists largely of a broad wing fastened to a steel skeleton, at the rear of which are located the tail control surfaces. It is too heavy to engage in soaring flights, but meets well the purpose for which it is intended—merely preliminary training.

Mrs. Lindbergh’s lesson was typical of that given to any student, differing only in that she got a concentrated dose and finished all her training in a few hours. She took her seat in the cockpit, merely an open Seat in front of and below the wing. She placed her feet on the rudder bar and took the stick in her right hand. During the first run down the field at a speed of about 12 miles per hour, her only responsibility was to guide the glider as though she were driving an automobile. She turned neither to right nor left and kept the glider on the ground but holding the stick in neutral. After the first few runs during which she learned to coordinate the movements of elevators and rudder just as she had done while Colonel Lindbergh was teaching her to pilot an airplane, she had her first actual flight.

As the plane gathered speed on the eighth trip it took off and made short hops the length of the field. As she pulled back lightly on the stick, which pushed the nose of the glider into the air, she left the ground only to settle back again as she shoved the stick forward. Bowlus sat on the back of the car, megaphone in hand directing the student while she learned to keep herself steady in the air. On the last two runs the towing rope was released and Mrs. Lindbergh made a glide back to earth. Once she maintained her speed and climbed a little before coming in to land. During these lessons Mrs. Lindbergh got the “feel of the glider” and prepared herself rapidly for the afternoon sail of nine minutes.

The procedure of starting her off in her first sailing flight followed that of the day when Colonel Lindbergh took his hop. From the crest of a hill near Soledad Mountain the sailplane was pulled rapidly into the air by six boys who manned the shock cords.

The plane in which the Lindberghs flew is a sister ship of that described in Modern Mechanics recently by Mr. Bowlus. It is a full cantilever monoplane with no external bracings. The wing measures 60 feet from wing tip to wing tip and weighs 157 pounds and comes to earth at a speed of 18 miles per hour.

Using this glider, Mr. Bowlus has several times set new American records for duration flights. At the time of going to press lie had just bettered his previous record by staying aloft for more than nine hours, but as he is intent on besting the world’s record of better than 14 hours, established by a German expert, it is entirely probable that he will have bettered his nine-hour mark by the time this article is printed.

To one who does not understand the laws of aerodynamics it seems miraculous that a glider can stay aloft at all without using a motor or some source of mechanical power. As a matter of fact, there is a source of power, but it is furnished by natural air currents, and one’s success as a glider pilot depends largely on one’s ability to take advantage of these currents. A breeze traveling over level ground encounters a hill directly in its path and its course is deflected upward in much the same way that the breeze from an electric fan can be diverted toward the ceiling of a room, at right angles to its original course, by placing a flat reflector at a slight angle in front of the fan.

A glider pilot, therefore, studying the country below him, takes advantage of these upward currents, maneuvering his ship into such positions that the draft swings up under the wings and carries his ship upward with it. Sunlight beating on the ground produces warm currents which have a tendency to rise, and this fact, too, is taken advantage of by the pilot. As yet no glider has succeeded in slaying in the air overnight, and it is probable that this feat never will be accomplished, since with the setting of the sun the air currents set up by differences in surface temperature largely disappear.

Naturally a glider is built very much lighter than an airplane, and the wing spread is much greater in proportion. The 60-foot wing span of’ the Bowlus sailplane is twice that of a small biplane.